The Clipse - Til The Casket Drops 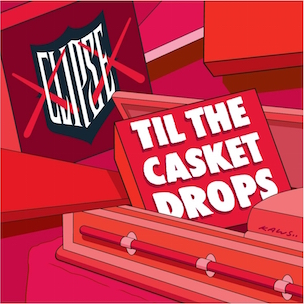 “Third time’s a charm” is an interesting adage, particularly when uttered by Clipse. It’s interesting because Malice and Pusha T’s existence in the music industry could hardly be called charming. For, while garnering significant critical (and moderate commercial) acclaim, Mal and Push have never been fully welcomed by the higher-ups. It was well-documented that “them crackas weren’t playin’ fair at Jive.” The label issues continued at Koch, as the group’s other project, Clipse Presents Re-Up Gang, faced major quality issues, containing recycled verses and poor production. Now that the Virginia duo has allied with Columbia for the third official group effort, Til The Casket Drops, the question remains – is the third time really a charm?

For the first time in Clipse’s album history, features production by someone other than The Neptunes, who now share playing time with DJ Khalil and Sean C & LV.  As such, the latter is called on to produce the introductory cut “Freedom”

. Over subdued but distinct guitars and speedy drums, the Rap duo assesses their dominance once again.  Spits Pusha: “I’m sorry for the heartbreak / I promised you forever my lady / Jodeci, baby / Pompous mothafucka, just look what them jewels made me / I’m only finding comfort in knowing you can’t replace me / What a thing to say, but what am I to do? / I’m role-playing a conscious nigga, and true is true / Cocaine aside, all the bloggers behoove / My critics finally have a verse of mine to jerk off to.”

Next is the unquestionable highlight of Casket (and possible song of the year), “Popular Demand (Popeyes),”

featuring Cam’ron and Pharrell. It’s difficult to articulate everything that makes this song perfect. From the Mal and Pusha’s foolish delivery and Pharrell’s outstanding hook to Cam’ron’s flawless, lazy flow on his verse, coupled with the ‘Tune’s unforgettable production, this is an instant classic. If ever there were an award for “greatest late-afternoon summer drive joint,” this cut would be in serious contention.

DJ Khalil takes his turn on “Kinda Like a Big Deal,”

the lead-off single and spiritual successor to “Wamp Wamp.” Featuring primal drums and top-shelf Kanye West lyrics, this track immediately joins the ranks of vintage Clipse singles. After the aforementioned heater, The Neptunes take Casket’s sound into quirky territory with “Showing Out,” featuring Yo Gotti. The production isn’t much to write home about, as it quickly becomes repetitive. “I’m Good” doesn’t fare much better, with relatively passive production in stark contrast to Clipse staples like “Grindin.”

Continuing to make a strong case to be a more frequent collaborator is DJ Khalil with “There Was a Murder.” Over his ominous Jamaican-flavored instrumentals, Clipse explores the tale of a snitch’s untimely end with ruthless execution. Not to be outdone, Chad and Pharrell provide an equally-sinister offering with the brutal horns on “Door Man.” And, just as a solid outing with Re-Up Gang member Ab Liva (“Never Will It Stop”) offers hope that Clipse will retain their nearly-flawless catalog, any charmed existence that Casket hopes to offer wears off with the first major blunder of the album – “All Eyes on Me”

Don’t be fooled, ladies and gentlemen, as this cut has next to nothing in common with a latter-day ‘Pac. No, the Keri Hilson-assisted track sounds like it came from the cutting floor of N.E.R.D.’s most recent project. Things continue to go south with the exercise in banality that is “Counseling,” and go into full-blown downward spiral mode with “Champion.” The most astounding thing about these tracks is their entirely forgettable production. Because all three were produced by The Neptunes, it makes one wonder whether or not Chad and Pharrell were able afford as much attention to this project because of their work on the aforementioned N.E.R.D. album. Whatever the reason, this array of disappointments entirely derails any hopes of cohesion Casket may have hoped to have. “Footsteps” and “Life Change” are significant improvements, attempting to regain the record’s traction, but it’s too little too late, as those two close out the album.

Till The Casket Drops, by most standards, is an inconsistent, sometimes-brilliant project. That might cut it for some acts, but Clipse isn’t one of them. After dropping two arguable classics, both of which could be bumped damn near front-to-back, it’s astonishing to see one of their albums reach such dizzying highs and perilous lows. This “day and night” quality is what costs Malice and Pusha an opportunity to complete their trifecta of outstanding LPs, and that’s what is most disappointing.