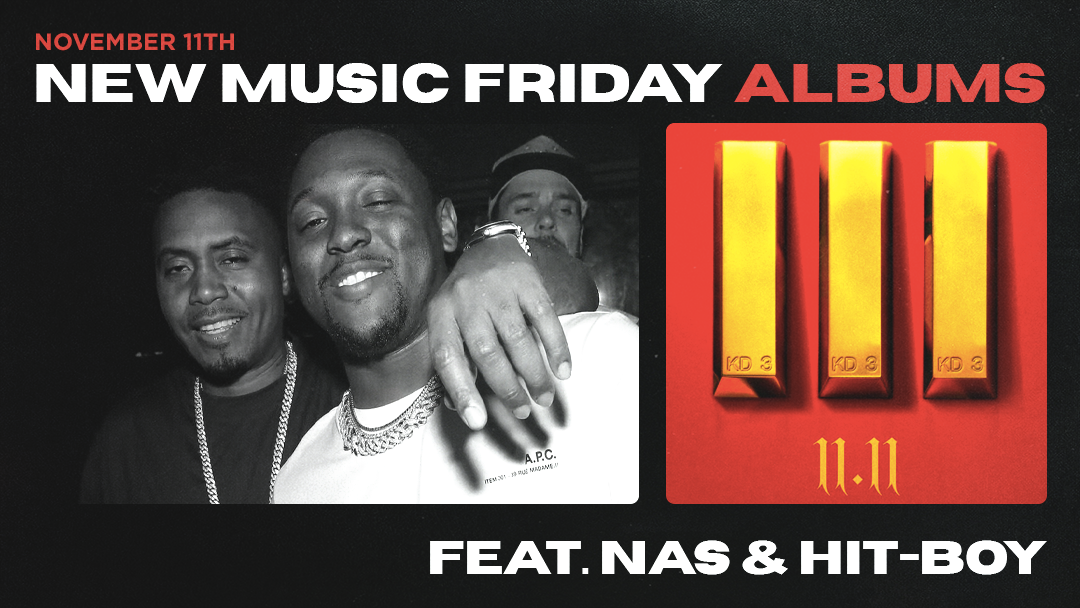 Among the pack of noteworthy releases is the trilogy-completing King’s Disease 3 from Grammy Award-winning rapper-producer duo Nas and Hit-Boy, along with Cactus Jack standout signee SoFaygo’s debut album Pink Heartz.

Additionally, Virginia creative DRAM returns to form by sharing his fresh offering What Happened Was, Run The Jewels partners Killer Mike and El-P drop off RTJ Cu4tro and Warner Records’ resident disrupter David Sabastian teams up with DJ Drama for his Gangsta Grillz mixtape God Save The Rave.

View the full list of the albums released on Friday (November 11) below:

At this point, it’s almost no longer a question of what Nas and Hit-Boy will do but more so, what they won’t do. The trans-generational duo has already delivered two installments of their collaborative King’s Disease albums, home to fan-favorite tracks such as “Rare,” “EPMD 2,” featuring Eminem and “Spicy,” featuring Fivio Foreign and A$AP Ferg.

Likely their biggest accomplishment thus far is the feat they achieved by earning the Grammy honor for Best Rap Album in 2021 with their inaugural version of the series.

Now, the Queens MC and West Coast producer seek to make Magic once again with their new collaborative effort King’s Disease 3. The dynamic duo seek to build onto their legacy as the Quincy Jones and Michael Jackson of rap with their new 17-track release.

Cactus Jack artist SoFaygo is the unabashed leader of the new school. Upon breaking through with his 2020 hit “Knock Knock” the Georgia-bred rapper has become a favorite of high-profile youngsters such as LeBron James’ son Brony James, who invited SoFaygo to perform at his 18th birthday party in L.A. earlier this month.

He’s also quickly established creative synergy with newcomers such as Ken Carson, who assisted on his album-leading single “Hell Yeah.” And with a core listening base of well over two million monthly Spotify listeners, SoFaygo fearlessly wears bares his emotions on his sleeve on his debut studio album Pink Heartz.

It’s nearly impossible to deny the fact that CMG artist GloRilla is having an outstanding year. The Memphis native not only managed to capture the collective consciousness of the industry after her Hittkidd-produced anthem “FNF (Let’s Go)” went viral, but she also finessed a major label deal thanks to Yo Gotti.

To add yet another fold of hype to her evolving glow-up saga, GloRilla also secured the coveted Cardi B feature on her fan-favorite track “Tomorrow 2,” which has already garnered more than 41 million YouTube views on the official video since the record dropped last month.

In an effort to toast to the current moment she’s having, GloRilla has opted to deliver her appropriately titled, nine-track project Anyways, Life’s Great…

In 2021, Alabama artist BLEU proved why Boosie Badazz co-signed him as an artist to watch even before HipHopDX placed the coveted Rising Star honor upon him.

Between collaborating with Drake on his colossal 2020 hit record “You’re Mines Still,” and delivering his 2021 debut album Moonboy, with features from artists such as Moneybagg Yo, Big Sean, Jeezy, 2 Chainz and more, BLEU has established himself as a force to be reckoned with in the new landscape of R&B.

The 28-year-old appears to be reaching past the constellations once again as he releases his new album TANTRA. The expansive 17-track project captures BLEU at a new pinnacle alongside artists such as Nicki Minaj, Lil Wayne, Ne-Yo, Kelly Rowland and more.

DRAM — What Had Happened Was…

Actively putting the Drake drama aside, it’s hard to not notice how diligent DRAM has been all year long. Following the release of his 2021 album Shelley FKA DRAM, an ode to his deceased mother, the “Broccoli” rap vocalist embarked on an all-out campaign of releases.

Catapulted off by his sensitively-sensual “Chocolate Covered Strawberries” ballad, DRAM went on to deliver five singles, including his generationally-relevant record “Let Me See Your Phone.” His full vision has finally materialized with the release of his album What Happened Was…

Equipped with 19-tracks, DRAM’s new project is largely a solo effort, aside from the assist MidWest crooner BJ The Chicago Kid provides on the song “PPL.”

L.A. native David Sabastian literally went from selling his album on Instagram to working with DJ Drama to deliver his own Gangsta Grillz mixtape. In reality, his come-up is not nearly as simple as the aforementioned, but rather, his climb to the forefront of Hip Hop via his partnership with a major label is almost as linear as such.

After successfully doing numbers with his self-released album We Are God, David Sabastian has stirred the pot with his guerilla humanitarian brand SKIDROWFASHIONWEEK and militant single such as “America On Fire” and “The Devil Is A Liar.”

The multihyphenate now takes his lyrical gifts to the next level on his conscious new eight-track release Gangsta Grillz DJ Drama Presents David Sabastian God Save The Rave.

SleazyWorld Go — Where The Shooters Be