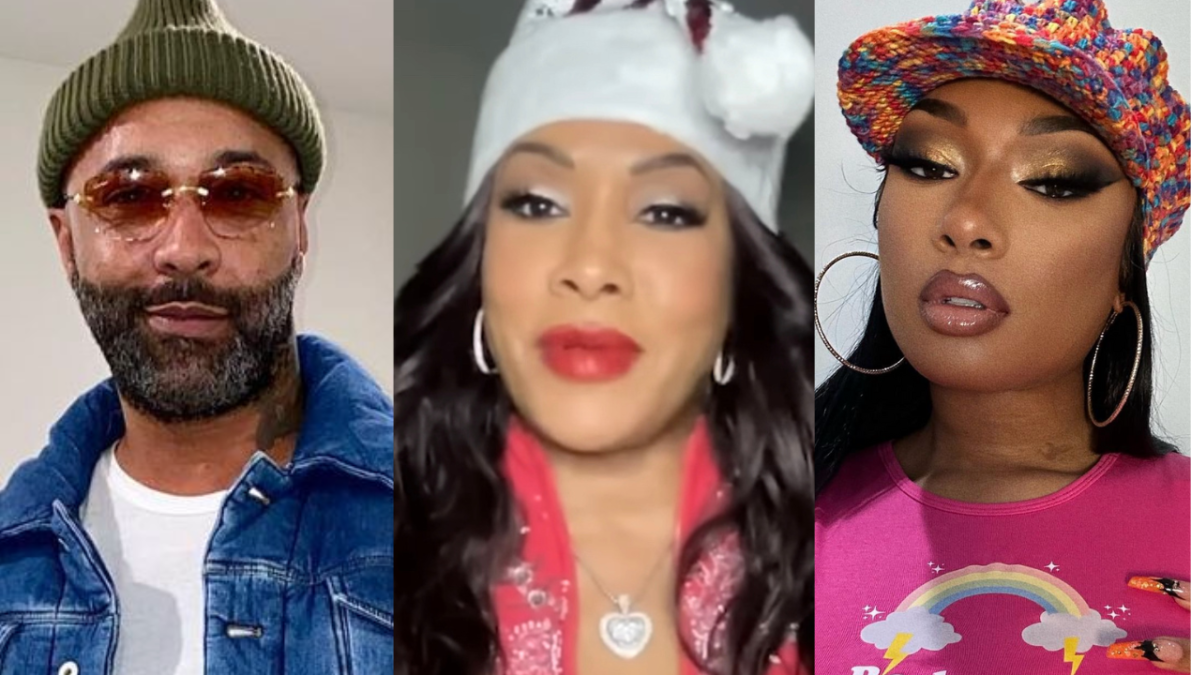 Joe Budden Called Out By Vivica A. Fox Over Megan Thee Stallion Comments

Joe Budden has been dragged by Vivica A. Fox over his comments about Megan Thee Stallion and her ongoing court case with Tory Lanez.

On the latest episode of Fox Soul’s Cocktails With Queens, Fox had some not-so-kind words for the former rapper in defense of Megan. Budden had admitted he didn’t like the Houston Hottie over how she’s treated some of his friends in the industry during a recent episode of The Joe Budden Podcast.

The actor wasted no time addressing Budden and telling him he needs to take a seat because women are leading the charge now, and there’s nothing he can do about it.

“Joe Budden if you don’t button it up and sit your bitch ass down hating on that girl,” Fox said. “You all mad ’cause girls is ruling rap. It’s just driving you all crazy that the sistas is just ruling over and taking numbers and can tell you about yourselves, look sexy with it, it’s a new day.”

She added: “But if you wanted some attention, to be honest with you, I think that’s the wrong one to try to get it from because it’s really coming out facts it’s coming out after so many years of this trial being long-awaited that she was shot. So, you know, get used to it, brother, it’s a new day. Girls are ruling, sorry Joe Budden.”

Joe Budden had explained why he didn’t like Megan while speaking on her court case on his podcast. According to the “Pump It Up” rapper, Meg has done some things to people he knows in the industry, and he won’t stand by it.

“Personally, I’ve seen this woman do horrible things to some really great people that I have longstanding relationships with here in this industry,” he said. “So I’m biased. You can’t just treat my friends, and people I fuck with, and people I’ve seen in this game for 15 years a certain way.”

There are several other people in the industry sharing their opinions on the ongoing trial between Megan Thee Stallion and Tory Lanez, including Fox’s ex 50 Cent. The G-Unit mogul took a comedic approach to his comments when comparing Megan to Jussie Smollet, who was infamously found guilty of felony disorderly conduct in December 2021 for allegedly staging a hate crime.

50 Cent implied Megan was heading down a similar path after it was revealed during the trial that she wasn’t telling the truth about having a sexual relationship with Tory Lanez.

“Damn i’m confused all this shit going around,” 50 wrote in the caption. “I don’t know what to think. LOL.”

CHIKA came to Meg’s defense earlier this week and dissed 50 Cent for trying to make a joke about the whole situation and telling him the facts are all out.

“If you took even a second to read through the court proceedings, it wouldn’t be so confusing,” CHIKA said. “As a figure in hip-hop, you should be responsible with how you use your platform. targeting the victim of a shooting ain’t it and never will be. i think you know that 9x over.

“There is literally no reason to believe that a story that hasn’t changed & came out involuntarily is untrue,” she continued. “I cannot imagine being @theestallion and having to see grown ass men cape for another not-so-grown ass man whose ego caused him to assault her with a deadly weapon.”