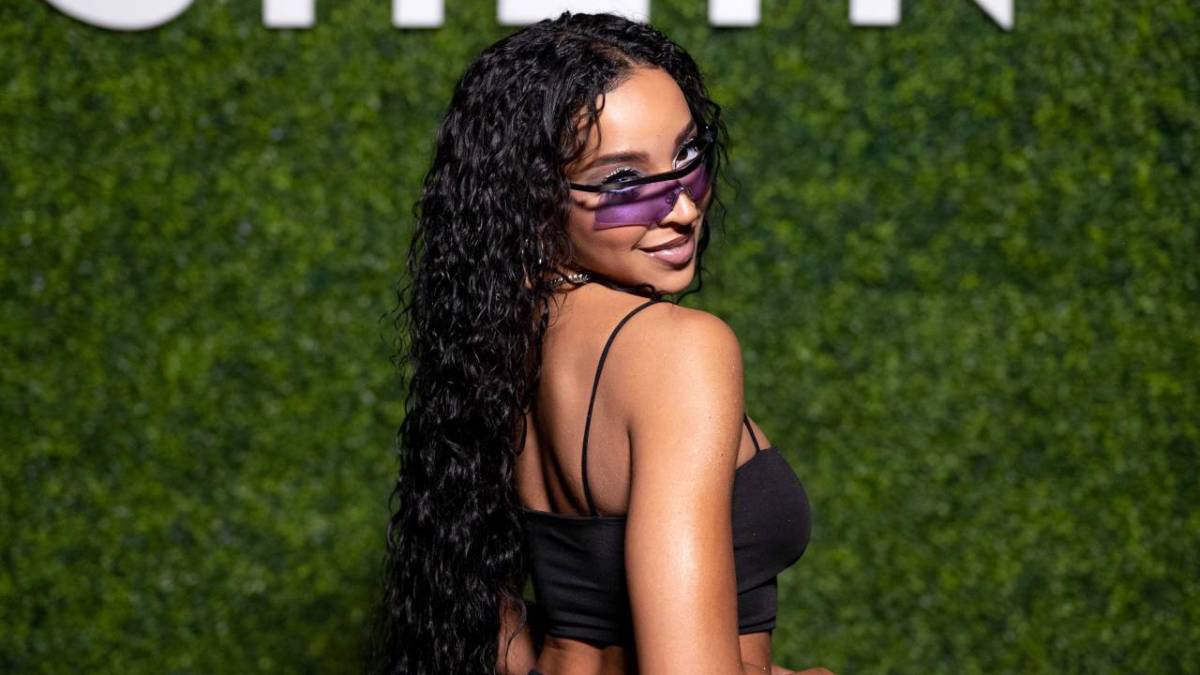 Tinashe is loving how the stars have aligned as she galavants into her next chapter with her new album 333, which was released on Friday (August 6).

Made inside the confines of her cozy home studio — which will be featured on an upcoming episode of MTV’s rebooted Cribs — 333 serves as a spiritual awakening for Tinashe, who continues her rewarding journey traversing music as an independent artist.

“Every time I create a new body of work, I reflect on what I’m going through and by being home, I was able to focus on my spiritual journey and the things I was going through,” a revitalized Tinashe says over the phone. “I was playing a lot of video games and there’s a lot of tech concepts and talking about what the future looks like where technology and spirituality kind of meet.”

Tinashe made the daunting decision to leave RCA Records in 2019 — where she called home since 2012  — and retooled her entire team. Without the major label machine behind her, Sweet T was nervous about what was to come, but she tapped into the most creatively free version of herself to craft 2019’s Songs For You and now 333. 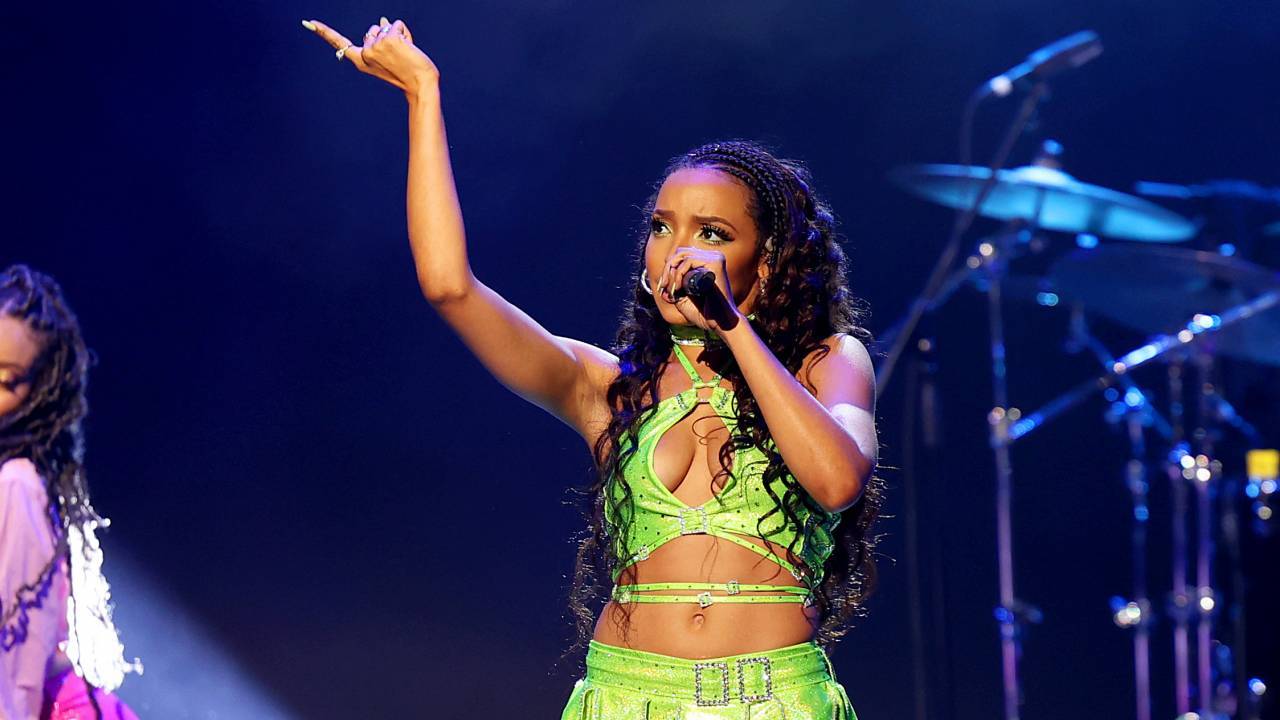 Tinashe Explains Why Genres Hold Back Artists Ahead Of '333' Album

The 28-year-old’s fifth studio album features an array of genre-blending assists throughout the 16 tracks from Jeremih, Buddy, Kaash Paige, Kaytranada, among others.

Check out the rest of our interview, which finds Tinashe speaking on covering Sports Illustrated’s Swimsuit edition, DaBaby’s controversial Rolling Loud rant, Jack Harlow replacing her with Chris Brown on a song and much more.

HipHopDX: Walk me through how this 333 album came together. What was the inspiration? I read about it being a “spiritual awakening” for you.

Tinashe: Yeah, that’s kind of the energy it embodies. I think in lockdown realizing I wasn’t going to be able to tour Songs For You and wanting to create a new body of work.

HipHopDX: What else did you learn about yourself during the pandemic? I know you started meditating again.

Tinashe: Yeah, my mom took me to learn how to meditate when I was 14. I’ve had all the tools but I took it a lot more seriously during lockdown. A lot of things were helping my mental health and gaining that confidence back as a creative, which I think is really crucial as an independent artist. Feeling like myself and having the power to make all those decisions.

HipHopDX: You recorded this album in your house, right?

Tinashe: Yeah, that’s my favorite place. I started recording myself at my parents’ house in my bedroom. I’ve always had a comfortable vibe at home and now I just have a studio at my house that’s bigger than my parents’ house bedroom. It’s still that very comfortable vibe where I can be in my zone and I don’t have to worry about any other factors than the music. It was convenient during lockdown.

HipHopDX: How did “Pasadena” with Buddy come together and how about sampling Outkast on there?

Tinashe: “Pasadena” had this really exciting energy and I remember when we were making the track to push the tempo up and giving it more energy and having my friends around singing the, “Hey, hey hey.” We just wanted to have positive vibes and also reflect on home and a nostalgic feeling.

Working with Buddy was great, he’s really talented. I love working with him and he’s a great collaborator. We have a great time working together and he’s super easy to work with. He comes in and does his verse, I’ll do mine and we have good creative banter. We made a few songs together and “Pasadena” was one of them I wanted on the project.

HipHopDX: Will there be a deluxe with the album?

Tinashe: I think so and I hope so. I got more songs.

HipHopDX: You tweeted about how you’re going to make multiple albums about your exes. Is this project centered around just one?

Tinashe: Yeah, it’s definitely about my ex because I feel like everything pretty much is. I feel like that’s the story of creatives’ lives. We put our pain, excitement, or mental cycles or trials and tribulations, we can put that into our art. That’s the coolest part of being an artist. It’s a way of giving yourself therapy. Then putting that all into something that can mean something for someone else. I feel like that’s a great way to distribute your energy.

One thing about me — If we date I will definitely write multiple albums about you . Literally hundreds of songs. Do with that information what you will.

HipHopDX: Do they ever hear it?

HipHopDX: I wonder if Ben [Simmons] heard it. Damn, it was already a rough summer for the guy.

HipHopDX: Can you show him how to hit some free throws?

Tinashe: Oh my God, no. I am not the one. Not with these nails.

HipHopDX: Staying on the sports theme, you covered Sports Illustrated Swimsuit edition. How about talking that into fruition and seeing that come to life since you told your mom you’d be on the cover one day when you were a kid?

Tinashe: Yeah, Sports Illustrated is such an iconic publication. Swimsuit Edition is something us millennials we always looked at it like, “That’s so sick.” To be a part of it is so dope and they never use music artists. They only collaborated with Beyoncé. It’s amazing to be a part of that, especially as an independent artist. I asked my mom if she remembered that moment and she said, “Yep, definitely.” It’s cool to reflect on moments like that and come away.

HipHopDX: How do you feel about your independent journey so far? Songs For You was well-received.

Tinashe: I feel like it’s a continuous process of becoming more empowered and authentic to what I’m supposed to be doing and making. When I first went independent, I didn’t know what to expect because it was a big transition. Seeing how well Songs For You was received really gave me more confidence going into this album with all the elements. We really locked in and I have a great team now. My management, publicist, hair and makeup, stylist, everyone’s firing on all cylinders.

HipHopDX: What did you think of DaBaby’s controversial comments at Rolling Loud? Do you think Hip Hop has come far enough when it comes to not tolerating hate in the industry compared to when you got into music?

Tinashe: Yeah, I think those comments were really disappointing but I’m looking forward to us having more conversations about things like that. I’m a huge advocate for the LGBTQ community so I want to move those conversations forward and spread good information. For activism across the board, I think it’s important we have these conversations.

In 2020, we did have a lot and I think it was a great way to start talking about racism and all the nuance that comes with that. We hold a responsibility to continue moving toward that direction as opposed to letting it be a moment in time. I think we can acknowledge our progress while still acknowledging the work that needs to be done.

HipHopDX: You have a Cribs episode coming in the new MTV reboot. What’s the most unique thing about your house?

Tinashe: That’s so fun, I loved Cribs. Probably my home studio because that’s where the magic happens if you will. Just to show people that in a way that’s well-documented that I can look back on forever that’s really cool.

HipHopDX: Doja Cat shouted you out on her new album Planet Her. Do you guys think you look alike? I saw she wants you to play her in a movie about her life.

Tinashe: That’s funny. I mean, we definitely do have some similarities for sure so that’s so cute. She’s awesome and I think her new project is amazing. She actually reached out and said she loved “Bouncin” too like she was obsessed and she texted me.

HipHopDX: We gotta get her on the remix.

HipHopDX: Jack Harlow replaced you with Chris Brown on “Already Best Friends.” Is that something that happens a lot? Is that industry politics?

Tinashe: I think that happens all the time in music. Artists make verses for other peoples’ songs and then they use a different artist or don’t end up on the final mix. That’s music business 101. It’s a business, at the end of the day. Navigating it is learning not to take things personally. I wish I was able to talk to him about it, but it’s all good.

HipHopDX: It feels like you’ve had five careers in one and you’re still 28. Is it tough not to get burnt out with still so much left to conquer?

Tinashe: I feel like I have this crazy work ethic. Maybe one day I’ll want to slow down but I’m really motivated by creating and making new things and I love it. It doesn’t feel like a job necessarily. It feels like I’m more able to share more of my art and get my message out there and I love that. There’s no stopping me for now.