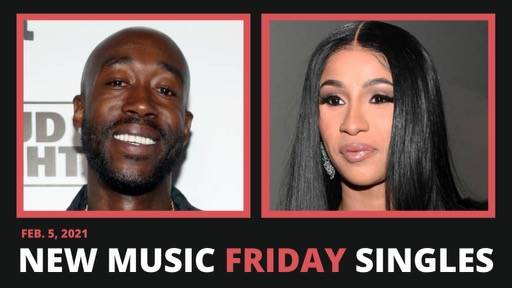 It’s the dead of Winter outside but in the digital sphere this New Music Friday is a much needed scorcher. Freddie Gibbs, whose ascent shows no sign of slowing down, coming off his 2020 Rap Album Of The Year win, brings ScHoolboy Q out of hiding, Cardi B looks to up the ante with her follow up to “WAP,” and Chris Brown ushers in another return of the mack, tapping Mark Morrison for his latest single.

The collabs continue as J.I.D teams up with Denzel Curry, Shordie Shordie and Murda Beatz tease their collaborative project with a Trippie Redd feature and Vic Mensa brings the cross-generational fire with Chance The Rapper and Wyclef Jean.

In short, it should be a good weekend for Hip Hop fans. Let’s get into it.

Freddie Gibbs solidified his alliance with the West Coast on his song “Lakers,” and now he continues to cement his loyalty this time with most elusive of TDE spitters, ScHoolboy Q.

Few people know how to operate the hype machine like Cardi B, and once again she had fans foaming at the mouth with her announcement of the follow up to “WAP.”

Chris Breezy has continually blurred the lines between Hip Hop and R&B, most recently with his and Young Thug’s collaborative album Slime & B. On his latest single he keeps that trend going, outsourcing bars to G-Eazy and reprising the glory of the man (Mark Morrison) that made the 90s great with his infectious single “Return Of The Mack.”

On the same day Vic Mensa announces his forthcoming project the I Tape, the Chicago-bred spitter also links with Chance The Rapper and Wyclef Jean to speak on the subject of prison reform. This one is inspired by Vic’s meeting with Julius Jones, who is currently pleading his innocence on death row.

As his buzz continues to grow on the strength of a strong year, the self-proclaimed “GOAT” returns with his first single of the new year.

Coming off of the sad news of his twin brother catching a federal indictment only four months after his release, Tee Grizzley tries to keep some positivity flowing with his latest single, perfect for the wee hours of the night.

the future collides as the Spillage Village/Earth Gang representer turns up the volume with Denzel Curry on their new joint.

Also be on the lookout for new heat from Smokepurpp with Lil Mosey, bubbling Brooklyn Drill rapper Dusty Locane, Night Lovell, Nessly and more and check back throughout the week for the latest new singles and videos from the world of Hip Hop.