Tekashi 6ix9ine has been eerily silent since his TattleTales album failed to debut at No. 1 on the Billboard 200 last month.

The notorious internet troll can typically be found on Instagram Live talking about other rappers’ low album sales or defending his decision to become the federal government’s star witness in the case against Nine Trey Gangsta Bloods Aljermiah “Nuke” Mack and Anthony “Harv” Ellison.

But for the last few weeks, the only headlines 6ix9ine made was for allegedly overdosing on caffeine and the diet pill Hydroxycut and the perceived Morgan Freeman diss on 21 Savage and Metro Boomin’s Savage Mode II project.

That changed on Tuesday (October 13) when the controversial rapper resurfaced on Instagram rocking a new look. Not only is his signature rainbow hair brown, he’s also sporting what looks like the beginnings of a beard.

#6ix9ine got rid of his 🌈 hair following Hydroxycut overdose 👀 Hit the link in bio to read more! #DXNews

People in the comment section were quick to point out 6ix9ine seemed “humbled” and they credited TattleTales — which Akademiks deemed a “flop” — for the transformation in 6ix9ine’s attitude.

The project was initially expected to move around 150,000 units and debut at No. 1 on the Billboard 200, which would’ve been 6ix9ine’s first chart-topping album. But instead, around 100,000 of those units were disqualified (which Billboard denied) and TattleTales landed at No. 4 in its opening week — not exactly the powerful comeback 6ix9ine was after. 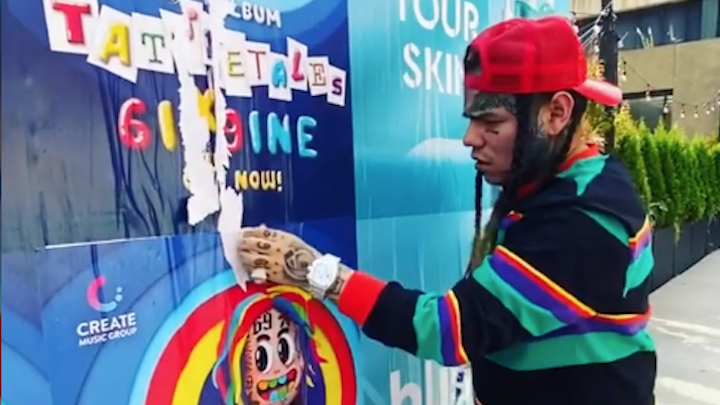 Making matters worse was 6ix9ine’s trolling. For days leading up to the release, the 24-year-old Brooklynite had been clowning other rappers such as Lil Durk and Lil Reese for their numbers, only to be served a hot, steaming piece of humble pie when TattleTales dropped.

Since then, 6ix9ine has been mostly absent from social media. According to The Shade Room, 6ix9ine was briefly hospitalized in Florida for overindulging in coffee and the aforementioned diet pill, something Akademiks confirmed.

“Tekashi was hospitalized two days ago in Florida after he had 2 Hydroxycut pills instead of the recommended 1 per day, which increased his heart rate and caused him to sweat excessively,” the post reads. “Tekashi tells us that this, along with drinking a McDonald’s coffee.”