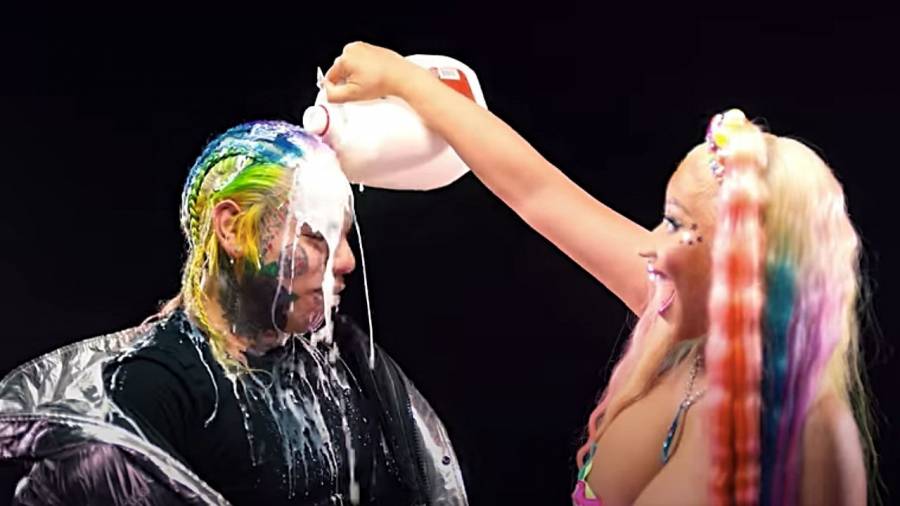 Instead, the media personality has deemed the project a “flop” after Billboard disqualified over 100,000 of his merch bundles. Although TattleTales was originally expected to debut at No. 1 on the Billboard 200, 6ix9ine’s sophomore effort is now on track to sell roughly 50,000 units in its first week.

Being a numbers guy, 6ix9ine is well aware how dismal that is — and so is Akademiks. In a YouTube video, Ak broke down what makes TattleTales a bona fide failure.

“You had a No. 1 song in the last couple of months, you’ve done all this trolling — going to Nipsey’s mural, going to O Block — you snitched on n-ggas, you gonna sell 50,000 in the first week and you’ve been clowning other n-ggas who sold 50,000 in the first week,” he says. “You can’t be the numbers guy and then your numbers are weaker than the people you clownin. Doesn’t make sense.

Ak goes on blaming a lack of radio support and the fact 6ix9ine has “burned a lot of bridges” even before he went to jail.

“Now with the snitching, it’s like the icing on the cake,” he continues. “And he’s out of here. Radio doesn’t want to fuck with him, especially radio stations that need to play Hip Hop which is primarily what they call urban stations. They’re not going to play the guy — these radio stations are being played in inner city communities — everybody’s calling a rat. OK, so no radio.”

The other part of the equation Aks says is 6ix9ine’s music being left off playlists on digital service providers such as TIDAL, Apple Music and Pandora, which he says typically accounts for roughly 50 percent of streams.

Tekashi 6ix9ine's 'TattleTales' Projected To Debut At No. 1 On Billboard 200

Earlier this month, 6ix9ine called out Spotify and Apple Music for not playlisting his music, writing in a since-deleted Instagram post, “HEN THE INDUSTRY KNOWS THAT YOU ARE A MONSTER AND YOU CANT BE STOPPED. THEY MAKE SURE THEY DO EVERYTHING IN THERE POWER TO MAKE YOU LOSE.

“THESE AWARD SHOWS THESE TOP CHARTERS ARE THERE BECAUSE THEY WANT THEM TO BE AND THEY’LL BEAT THEM IN YOUR FACE TILL YOU THINK YOU LIKE THEM … I DROPPED A ALBUM TODAY AND THEY HAVE COMPLETELY BLACKLISTED IT SO NO ONE CAN SEE IT @thelarryjackson @carlchery THE INDUSTRY IS RIGGED.”

Toward the end of Ak’s video, he does admit 6ix9ine is his “homie” but has to call a “spade a spade.”

Check out his comments above.