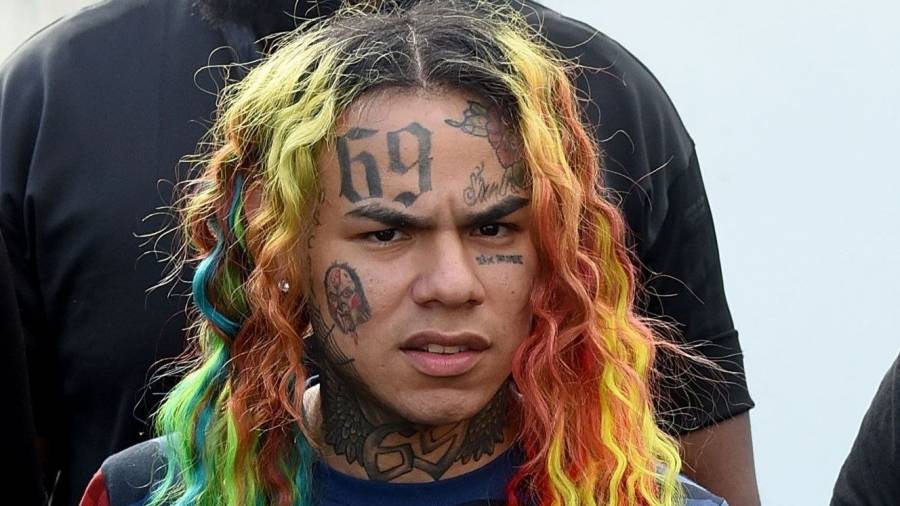 New York, NY – All Tekashi 6ix9ine wanted to do was grab a slice of classic New York City pizza on Wednesday evening (August 19). But after several apparent Blood gang members spotted him, he quickly became the subject of ridicule.

While 6ix9ine orders his food, someone yells, “We spittin’ bars over here. Sup, n*gga!? 6ix9ine! Talk about bitch ass n*ggas, that n*gga’s a bitch. Look at this n*gga.”

With gang signs flying, they then yell “Later hoe!” as he walks away surrounded by two large security guards. Although one man asks, “Can I get a picture?,” 6ix9ine swiftly gets into the black SUV awaiting him and drives away.

The person who shared the video to Twitter, Lil Baywo, captioned the post, “I just ran into @6ix9ine and he didn’t want to take a pic. Scary ass.”

By now, the rap community is well aware of 6ix9ine’s “snitch” reputation and subsequent takedown of two alleged Nine Trey Bloods last October. Since his April release from prison, 6ix9ine has picked up where he left off — dropping music and trolling the living hell out of anyone and everyone on social media.

With gang retaliation a very plausible scenario, many people believe he’s playing a dangerous game by being so conspicuous in public. But that hasn’t stopped the 24-year-old rapper from making his moves.

6ix9ine just returned from a trip to Los Angeles where he posed in front of a Nipsey Hussle tribute mural in the Crenshaw neighborhood, drawing the ire of The Game and TDE rapper Reason. Although he denied he was being disrespectful, Game thought otherwise and sent him an ominous warning on Instagram.

In the wake of his prison release, 6ix9ine broke a YouTube record previously held by Eminem with “GOOBA” and earned his first Billboard Hot 100 No. 1 with the Nicki Minaj-assisted “TROLLZ.”