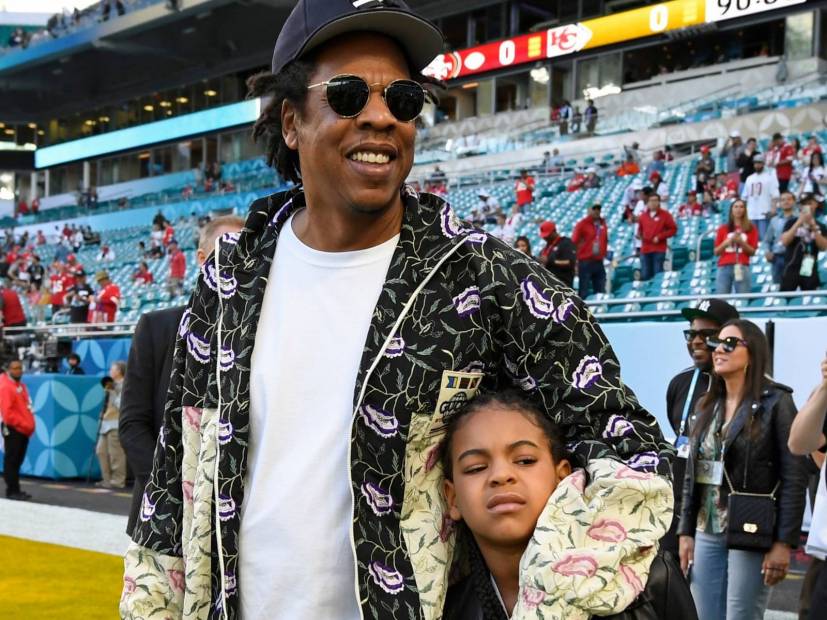 New York, NY – JAY-Z made an appearance at Columbia University on Tuesday (February 4) where he was asked about the recent controversy surrounding his conduct at Super Bowl LIV. Hov, his wife Beyoncé and daughter Blue Ivy were filmed seated during the national anthem, which many assumed was symbolic.

But when a Columbia professor asked if it was an attempt to “convey a signal,” the Hip Hop mogul replied, “It actually wasn’t. Sorry. It was not premeditated at all.”

Instead, Hov said he and Beyoncé — who has performed at the Super Bowl before — were analyzing Demi Lovato’s rendition of the song.

“We immediately jumped into artist mode,” he explained. “I’m really just looking at the show. The mics start. Was it too low to start?”

He added, “The whole time, we’re sitting there, we’re talking about the performance and right after that, Demi comes out and we’re talking about how beautiful she looked and how she sounds and what she’s going through in her life for her to be on the stage, we’re so proud of her.”

Jay also insisted a “silent protest” wasn’t necessary because they already made a stir by the diverse artists they chose to perform during the halftime show, including J. Lo, Shakira, Bad Bunny, J Balvin and J. Lo’s daughter Emme Maribel Muñiz.

“It just happened,” he noted. “I didn’t have to make a silent protest. If you look at the stage, the artists that we chose, Colombian [Shakira], Puerto Rican J. Lo … we were making the biggest loudest protest of all.”

Like many others, Colin Kaepernick didn’t appear to see it that way. On Monday (February 3), the former San Francisco 49ers quarterback posted a screenshot of a TMZ story with the headline, “BEYONCE, JAY-Z & BLUE IVY SIT DOWN DURING NATIONAL ANTHEM … At Super Bowl LIV.”

He wrote “I thought we were ‘past kneeling’ tho” across the top.

Kaep was referring to an August 2019 interview in which Jay expounded on his partnership with the National Football League. Many viewed his alignment with the NFL as a slap in Kaepernick’s face. When asked about it, he replied, “I think we’ve moved past kneeling. I think it’s time for action.”