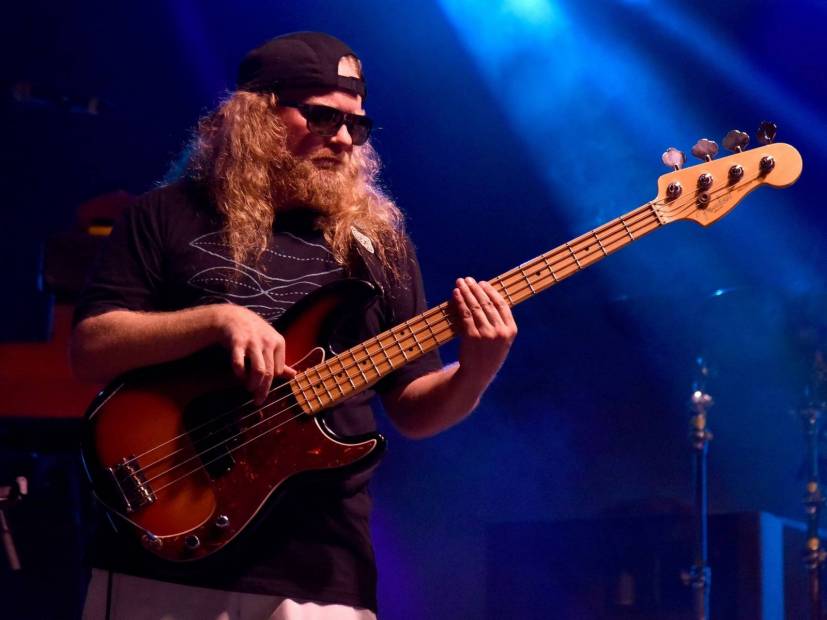 As the gifted bassist for funk band Lettuce, Erick “Jesus” Coomes is used to being in the spotlight. But behind the scenes, he’s a savage session musician who’s crafted songs with some of the most illustrious figures in Hip Hop – from Dr. Dre and The Game to Kanye West and Eminem.

Ahead of the 62nd Annual Grammy Awards, where Lettuce is nominated in the Best Contemporary Instrumental Album category for 2019’s Elevate, Coomes is posted up somewhere in Laguna Beach, California, basking in the sun and looking back on his storied career.

His wild tales involve everything from DJ Quik giving him his nickname in front of sold-out crowd at the House Of Blues to spending his birthday performing alongside Ghostface Killah and Solange during a 2013 Bonnaroo Superjam — and he keeps adding more chapters.

During an interview with HipHopDX, Coomes recalled going to a famous New York deli with The Game and Hi-Tek where he was faced with the biggest cheese sandwich he’d ever seen.

“Most of us are not from New York,” he tells DX. “Game is from Cali and Hi-Tek’s from Cincinnati and I’m from Cali. So we’re like, ‘We’re in New York. Let’s go to a dope New York delicatessen, a real delicatessen. I didn’t know shit about what that meant. I just was going because that’s something you do. I’m a big deli person now. I’ve come a long way from when I was a child. I didn’t know shit about deli stuff.

“You either know it or you don’t. I’ve been to a million delis now, but at the time I had no fucking idea what I was doing and I was vegetarian at the time. I’m not vegan yet obviously, but I was like, ‘Oh cool, I’ll just get a cheese sandwich because I love cheese sandwiches.’ Usually it has a couple of slices of cheddar or something and some mustard and bread and maybe a pickle. That’s what I expected but no, it was one of those towering sandwiches with like 60 or 70 slices of cheese on it.”

Instead of tossing it in the trash — because there was no way it would even fit in his mouth — Coomes bought a loaf of bread.

“I was like, ‘What the fuck is this?'” he continues. “There’s markets everywhere, so I got a loaf of bread and I took it to the hotel. I basically didn’t have to buy food because I had cheese sandwiches every day. The Game just laughed at me all the time. Well, not at me. They laugh with me. We laugh together. We all just laugh. We still laugh about that right now. It’s still funny.”

Coming soon to a Theater near yu

More recently, The Game dubbed Coomes and his equally talented brother Tyler “Tycoon” Coomes the “wine brothers” due to their preference for a finer beverage.

“The Game and I are really good friends, so we did a few sessions together,” he explains. “But he’ll go in for a few months. He’ll say, ‘Come back every day.’ And my brother and I went and he started calling us the ‘wine brothers’ because he brought our own wine every night. We were just kind of snobbishly drinking wine and everybody else was drinking red cups of Tequila. We brought our own wineglasses too. Game is like, ‘You guys are the wine brothers.’ I’m like, ‘No, don’t call us that.'”

But during one of those late night studio sessions with The Game, he knew Wiz Khalifa was supposed to stop by.

“I was sitting there, smoking a blunt on the front steps of the studio and the cutest little French bulldog rolls up,” he says. “The dog is wearing $50,000, maybe even $100,000 worth of diamonds. I’m like, ‘Oh, I think Wiz Khalifa is here.’ But his dog walked in before him, and I was like, ‘Damn this cute little dog is balling out of control.’ Wiz walked up right at two seconds later. It was cool.”

Over the course of his career, Coomes has developed several trusted friendships with a laundry list of artists. Even with his stacked résumé, Coomes says nothing tops working with Eminem on 2009’s Relapse album.

“Working on Relapse was very much the height of really just successful, good vibes,” he says. “Flying with Dr. Dre on his private jet to work on Relapse in an undisclosed location with Eminem was just amazing. It was great to be accepted as a peer by the likes of people like Dr. Dre and Snoop.”

He adds, “The little tiny moments that make my life is when I’m at Dr. Dre’s house and it’s somebody that I don’t know and doesn’t know me. Dre introduces me and says, ‘Hey, if you ever need bass, this guy’s a really good bass player.’ Just to hear that simple shit come out of his mouth … I’m still trying to become a great bass player.

“In my mind, I’m not a great bass player. In my mind, I’m a little kid trying to figure this shit out. But then you hear someone that’s really well established say, ‘Here, he’s great at bass.’ I go, ‘Oh, shit. am I good? Am I getting good at this thing?’ You never want to think you’re good. You want to stay focused on the work ahead of you.”

At the end of the day, Coomes wants to make sure he always respects Hip Hop culture and is grateful for the opportunity to be a part of it.