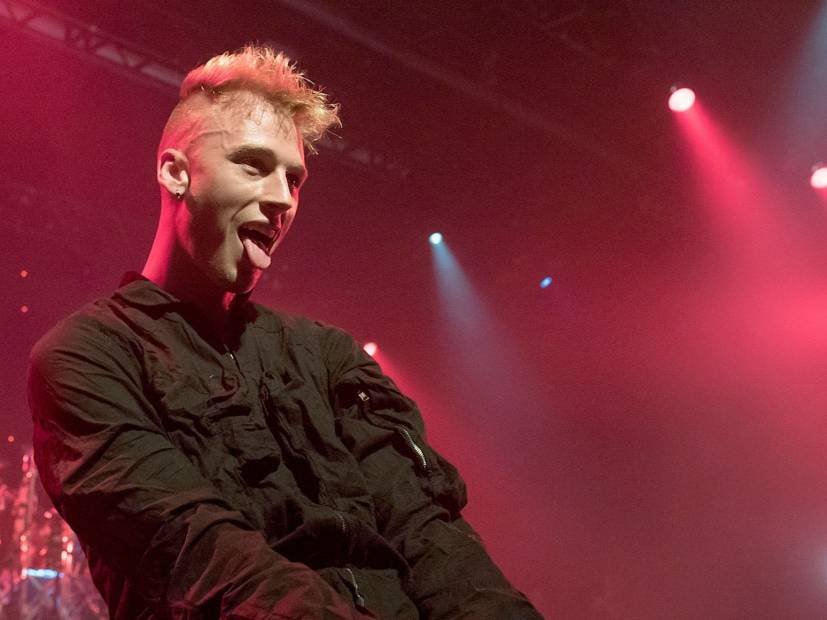 Machine Gun Kelly is apparently not a fan of No Jumper podcast host Adam22. While backstage at Rolling Loud Los Angeles over the weekend, he and another man attempt to call MGK over for an interview — but the “Rap Devil” mastermind wasn’t having it.

Instead, he slaps the microphone in Adam’s hand and walks away with a stern look on his face. Adam22 shared a clip of the awkward interaction to his Twitter account on Saturday (December 14).

“Was he trying to give me a handshake or something?” Adam says. “That was unique. That was wild.” They then burst into laughter.

He wrote in the caption, “MGK not too happy about me saying Eminem won that battle.” [apple_news_ad type=”any”]

MGK not too happy about me saying Eminem won that battle ??? pic.twitter.com/8zT9LamO7B

MGK, of course, went head-to-head with Slim Shady in September 2018 after Em dissed him on the Kamikaze cut “Not Alike” featuring Royce Da 5’9. In retaliation, Kelly dropped “Rap Devil” in an attempt to take Shady down.

After contemplating whether he should respond, Shady ultimately returned with “Killshot,” which Adam believes lived up to its name.

Since then, MGK is still heavily associated with the Em beef — and he doesn’t really seem to mind. He still wants to go bar-for-bar with the Detroit-bred rap titan and doesn’t hesitate to mention Em on social media.

On the one-year anniversary of the “Rap Devil” release, MGK wished it a happy birthday on Instagram.