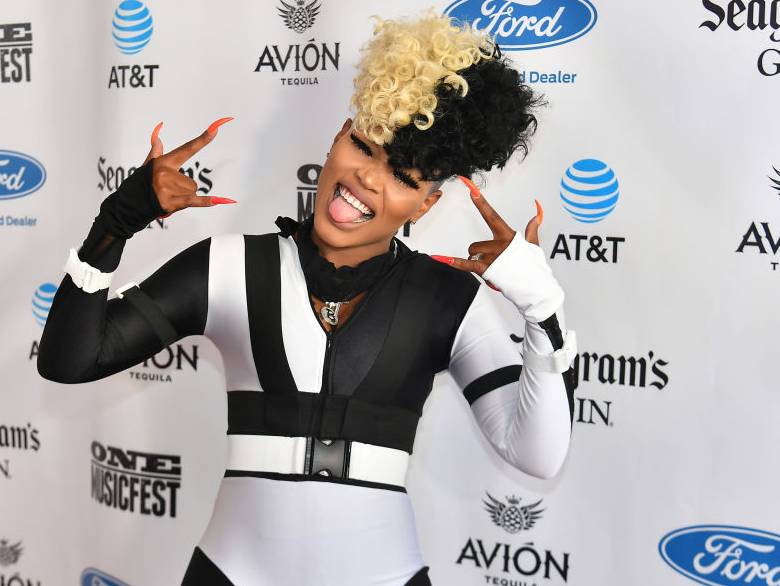 Interview: Rapper Londynn B. Talks Being A Finalist On Netflix's 'Rhythm + Flow'

NEW YORK, NEW YORK – Londynn B. was the only woman still standing in the final episode of Netflix’s Rhythm + Flow.

Four finalists — D. Smoke, Flawless Real Talk, Londynn B. and TroyMan — contested for the grand prize of $250,000 after weeks of being critiqued and judged. Undeniable lyrical skills, freestyles, live-performance, and creative direction were parts of the criteria required by judges T.I., Cardi B. and Chance The Rapper.

Executively produced by Grammy Award-winning singer John Legend, the 10-episode Hip Hop competition aired on October 9, 2019, and consisted of musical challenges and guest appearances. The first three episodes of the show followed the award-winning judges to their home cities of Atlanta, New York, and Chicago to discover talent.

The winner of Rhythm + Flow’s inaugural season was Los Angeles rapper D. Smoke, who also happens to be the brother of Top Dawg Entertainment’s artist SiR. Coming in second place of the rap competition was Rhode Island’s Flawless Real Talk and in third place, Londynn B., who is also an openly lesbian rapper.

Hailing from Brooklyn, NY, by way of Atlanta, GA, Londynn B. sat down with HipHopDX at SOB’s in New York where the 25-year-old spoke on her experience during the show, being the only female finalist, and her creative process.

HipHopDX: Hey Londynn, thank you again for joining us. Let’s talk about the show. What was that process like performing on the show for superstars like T.I., Cardi B. and Chance The Rapper?
,,
Londynn B.: Let’s start from the beginning. The process was scary as fuck in the beginning. It was a little scary … because for one, you don’t know them, you see them on TV, you see them on Instagram, but to see them in person, it was like my whole life changed. I was shitting bricks. My first time seeing them I was so scared, but I couldn’t let them see that I was scared, you know?

HipHopDX: For once everyone was able to see how dope of a rapper you are at one time. Since the show has ended, how has your life changed?

Londynn B.: The biggest change is the audience. I went from 50,000 followers to 1 million. Also, the access that I have now … places I couldn’t go before I can go now. There’s so many people who didn’t know me that knows me now. Now I can walk in the room and I can do certain things. That’s always appreciated … and then you know the show represented Hip Hop and for it to be the first of its kind on Netflix, it was an honor to be up there.

HipHopDX: What was the most challenging part about being the only female left in the competition?

Londynn B.: The most challenging part [was] being the only female left. That’s it.

HipHopDX: Of course! You’re a mom and was very transparent about that amongst other things as well on the show. What was it like being away from your daughter for so long as you chase your dream?

Londynn B.: I felt like being a mom on the show, it was a safe place to tell my story. As females, we aren’t able to tell our stories like that all the time, so we tell “another” story. I felt like it was safe and O.K. to tell that authentic part of my life.

HipHopDX: Looking at your style, you have a very unique look. How do you separate yourself from everybody else?

Londynn B.: I’m a visionary. I have to have a vision and then create it. It’s all about how I feel at the time and what I feel is going to make me stand out. But most importantly it’s about what’s going to make me feel good. I’m a colorful person. I live from the outside in … I get so inspired from art and I’m always looking into other cultures.

HipHopDX: Have you had any opportunities to work with any of your favorite artists since the show, or has anyone you wouldn’t expect reached out to work with you?

Londynn B.: Absolutely! I have a couple of features that are going to come out in 2020, but recently I just did a song with TroyMan from the show called “Blessings” and I have a song with Flawless Real Talk coming out soon. I also did a record with Beanz and Ali Tomineek from the show … so I definitely made my rounds. I’m still cool with everybody.

HipHopDX: How did it feel to come back to your home state and connect with your audience in New York City?

Londynn B.: It felt crazy! That’s why I was so excited. It was my first show in New York, and on top of that, I was really happy to be home. So I just wanted to do it in a major way. I had to leave that night and head straight back to Atlanta where I live now, so I just really wanted to go out with a bang and really make it count for New York City. That one was on me.

HipHopDX: So we know there are fire freestyles out there that you’ve done which have really helped newer listeners get a real sense of your raw talent. You have also started doing shows besides your music videos … what can we expect next from you?

Londynn B.: I have an album coming, more touring, more shows and collabs coming out real soon. Definitely more freestyles coming of course, and media coming. 2020 is definitely going to be a great year for Londynn B.

Check out Londynn B.’s video “I Can’t Change” below and follow Londynn B. on Instagram @londynnbofficial_ for more consistent updates.