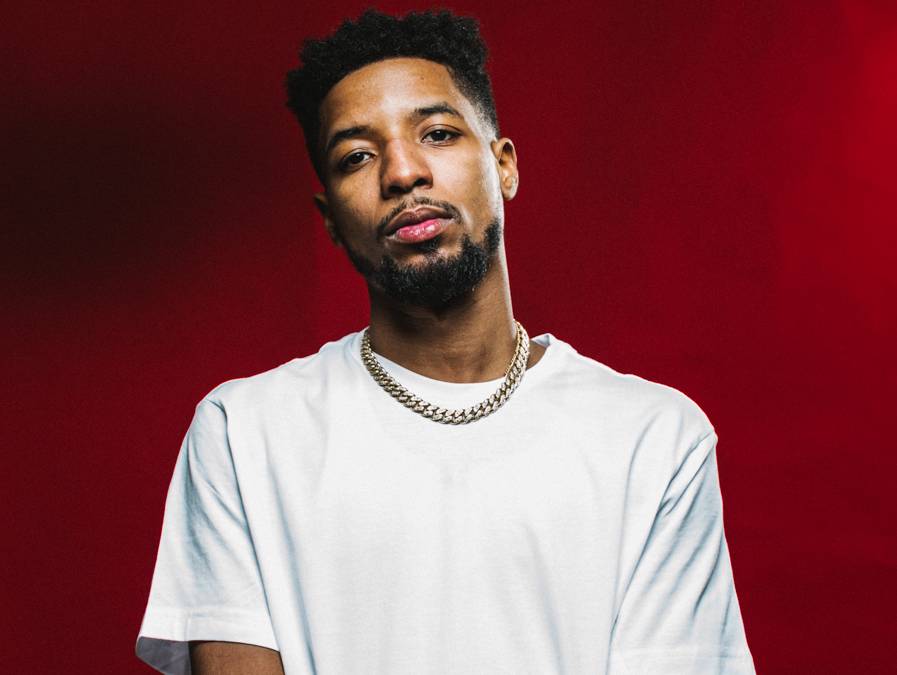 Los Angeles, CA – Most casual Hip Hop fans would know Chicago’s very own Rockie Fresh from his work with Rick Ross and the Maybach Music Group imprint back in 2012. Rockie dropped a few solid mixtapes under the Bawse-run label and made some seriously impressive contributions to the Self Made album series.

Those who’ve stuck it out with him though would know that he’s been quietly yet purposely been crafting his debut album, Destination. MMG might have taught the 28-year-old MC the value of hard work and an entrepreneurial mindset but his true colors shine through as his most recent release. The 12-track LP aimed to bring his full musical prowess to life with a Rolodex of sounds and styles that will hopefully propel him back into the hearts and minds of the mainstream. “Must Be” with Chris Brown (the album’s lead single) has been helping raise his stock over the past few months but the album as a whole is what Rockie is focused most on.

He took time to talk to HipHopDX about not only the album and its concept but also his departure from MMG, his new home at Rostrum Records and his plans for a 2020 takeover. Not to mention his favorite albums of the decade.

HipHopDX: How does it feel to finally have the album out. Destination is here!

Rockie Fresh: I feel pretty regular. I got a lot more shit that I plan on doing but I’m happy that we got this out right now. I’m just ready to keep the ball rolling. This is a good feeling, though.

HipHopDX: This album has been a long time coming. It seems like it’s the project you’ve been preparing your whole life to release. What made now the right time to drop it?

Rockie Fresh: I think really I was transitioning between different business situations and through that, I was still making music. But also still trying to find a home and to find the right team to get my music out to the fans the way I wanted to. I think we finally got a good majority of those resources down pat, leading it to this date that we decided to drop the album at this time.

HipHopDX: You’ve been with Rostrum Records for just over a year, right?

HipHopDX: What made that the right place to drop the album and to start the next part of your career?

Rockie Fresh: I had a good relationship with Benjy [Grinberg]. Me and him we were able to vibe. There was a lot of other mutual components that worked with him and we were real cool with. But I also think on top of that I’m a lot smarter. When I was in my last deal I signed right when I turned 21 – now I’m 28. So I’ve got a lot better understanding of the game and where I want to go. Even with being signed to Rick Ross he trained us all to be bosses. Everyone has their own label now and their own leadership they’re working out of. It was my time to do the same thing and Rostrum gave me the best opportunity to do that.

HipHopDX: What was one of the best lessons you learned from Ross while on MMG?

Rockie Fresh: He always told us “The game ain’t based on sympathy” and any time you go through something, any Ls you take you just take that on the chin and keep it moving and not get you your feelings. I think that helped me out a lot in the game because any ups or downs I went through I was able to take as a part of the game and keep it moving. That’s one of the best things I learned from Rozay for sure.

HipHopDX: Absolutely. Even on the last track on the album, you said: “We know the label fucked up on my last shit, still we got past it.” It’s good to see that even though you went your separate ways with Ross you managed to keep it all love.

Rockie Fresh: 100 percent. At the end of the day we all trying to win. With that as a common goal, there could never be any negative shit.

HipHopDX: That’s how the album feels – it sounds like you’re in a good place. It’s triumphant, it’s got hits with melodies and serious bars too. It’s different vibes for everyone. What was the process of putting all those sides of you together on one album?

Rockie Fresh: I think that was the upside of having so much time to work on the album. I was able to get songs from different pieces and timeframes of my life. I’m 28, so I’m still growing and going through things and learning how to navigate. Some things I have are super fun and that’s when the turn-up records get made and some days it’s super low and that’s when songs like “Falling,” “Take A Second” and certain records like that get made. With that, it was me constantly staying in the studio, I was able to tap into whatever emotions I was feeling that day and make the necessary records to really connect with everybody else’s emotions.

HipHopDX: You’ve got some great features on this album but I want to talk especially about your relationship with Casey Veggies. He’s been one of your most consistent collaborators since you first came out. What’s that relationship like?

Rockie Fresh: That’s like my brother. I be hanging out with him at his house when I’m in L.A. I’m cool with his parents — that’s like my real brother. We linked up in 2010 and we’ve been super close ever since. That’s real family. That’s why we make so much music together – because we always hang out, so we’re working constantly, nonstop. We probably have at least 100 songs together. We about to go crazy!

HipHopDX: I want to pivot and talk about your hometown of Chicago. Did you spend time in the city while recording? Did it play a role in the creation of the album?

Rockie Fresh: I did record a lot of the album in Chicago but also the concept behind the album cover: I go out on my balcony – I live in downtown Chicago so I go out on my balcony a lot and listen to beats, smoke out, listen to songs I’ve made in the studio. A lot of times it’s super late night when I’m out there and that’s how my view looks. I wanted to give people the feeling of what it’s like to be on my balcony looking out at night and just vibing to the music.

With the Delorean, that’s always a big theme in my projects: time travel and going to different places in my life – that was the whole concept. But yeah I recorded a lot of the album in Chicago. Mostly Chicago and L.A.

HipHopDX: Are those the two cities you’re based out of now?

Rockie Fresh: Yeah! It’s summertime Chi – it’s the best. But I love being in L.A. when it’s wintertime and cold in Chicago. It all works out.

HipHopDX: You did a pop-up in Chicago the day before the album dropped. How did that feel to release the album with the people of Chicago?

Rockie Fresh: Oh, that was awesome. Being around my friends, family and the fans that found out about my music first. You know, I always love doing stuff in Chicago. It was also a very peaceful event with no violence. I appreciate everyone who pulled up. It was awesome. I wouldn’t have had it any other way.

HipHopDX: Now, we are coming close to the end of the year – it’s only a month away. What do you think about Hip Hop moving into 2020? Are you optimistic on where the genre is going?

Rockie Fresh: I’m very optimistic, we’ve got a lot of artists. So you can focus on what, like, you fuck with. When you find something you like there are couple artists that can really satisfy that need. And then there are so many other options when you want to veer off into other things.  I’m always optimistic – there is a lot of stuff to sift through – sometimes it might get hard as a listener but I feel like whatever you’re looking for there is an artist for that somewhere in the world. I just want to be one of those artists that captures a lot of vibes. I want to be a one stop shop for my fans over the next few years.

HipHopDX: You know as well as I do that over the past year or 18 months rap has really crossed over and mixed with pop-punk, country and rock sounds and aesthetics. As someone who was early on absorbing the likes of Fall Out Boy and Good Charlotte, what do you think about Hip Hop embracing these other genres?

Rockie Fresh: I think it’s dope. That’s what we were really working for – for rap to considered deeper than that. But also real music. I think when music can come together in different ways it’s only a good look for Hip Hop because it shows how far we came. I’m with it 100%.

HipHopDX: Looking to next summer and warmer weather  – do you have plans to hit the festival circuit?

Rockie Fresh: That’s definitely something I want to do. We’re working on setting that up right now and on top of that I’m going to be dropping more music – so we’re going to flood. I definitely want to hit a lot of these festivals this year. Hopefully, we have big announcements for y’all at the top of 2020 letting you know where you can catch the Rockie Fresh live show. Because we definitely going crazy with it.

HipHopDX: For those who haven’t been yet – what can people expect at one of your live shows?

Rockie Fresh:  They are going to see a lot of energy but also they will get a nice experience with the lights and the digitals. We’re going to give them a one of a kind show for sure.

HipHopDX: Since we are at the end of the decade, I gotta know – what are some of your favorite albums of the past 10 years? Excluding your own.

Rockie Fresh: The decade? Damn. Let me see. I would put JAY-Z’s American Gangster – I think that makes the cut. I would put My Beautiful Dark Twisted Fantasy in there. I would put Take Care in there. good kid, m.A.A.d. city too.  That’s four, right? I would also throw Ross’ God Forgives, I Don’t in there.

Rockie Fresh: For me, it’s between that one and the one I really fuck with: Deeper Than Rap. That’s my shit. Teflon Don hard too, though.

HipHopDX: What else should the fans be looking out for from you next year?

Rockie Fresh: For right now, go stream that Destination album and then we’re coming to a city near you real soon.