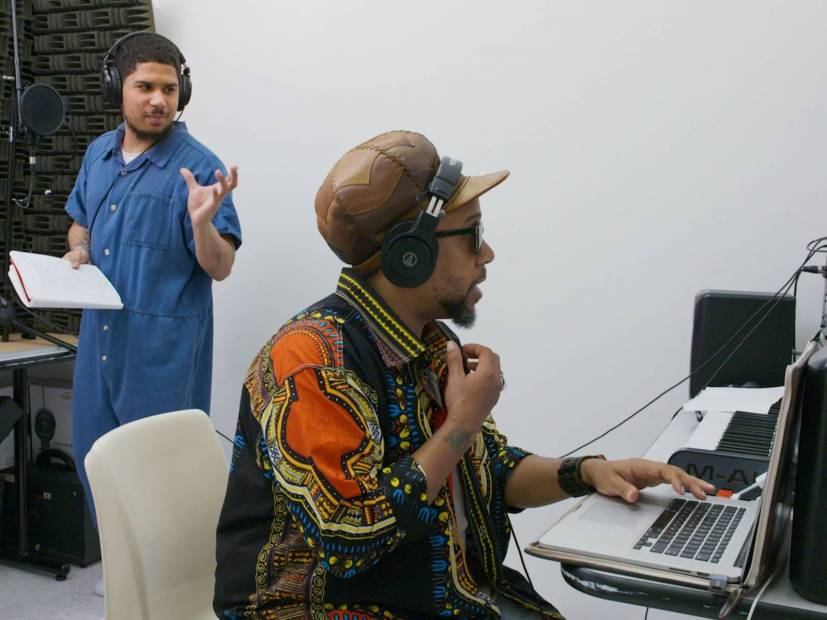 Arrested Development’s de facto leader, Todd “Speech” Thomas, finally unveiled his 16 Bars documentary at Village East Cinema in New York on November 8. It’s a film five years in the making and takes a hardcore look at the inner workings of the prison system.

Speech, being the veteran musician he is, decided to spend 10 days at the Richmond City Jail in Virginia and work closely with four inmates in a recording studio to see what would materialize.

He was shocked by what he discovered.

All four inmates — Garland T. Carr, the bluesy country singer with a passion for neck tattoos, Tennyson Jackson or “Teddy Kane,” the powerful MC who’s lethal with the pen but struggling with addiction and mental illness, the ambitious yet troubled Devonte James, and the skilled but rebellious Anthony Johnston — were untapped talents.

Throughout the process, Speech learned to look past the “criminal” label and grew to appreciate them as people. After all, like the rest of us, they all have unique circumstances that led them down their path.

Although Teddy Kane is back on the streets, homeless and still wrestling with his demons, Speech knows there’s a light at the end of the tunnel for him if he’s able to get back on course.

In an interview with HipHopDX, the Grammy Award-winning artist discusses what he learned inside Richmond City Jail while filming 16 Bars, the Real Life program and why Teddy could be this generation’s Tupac Shakur.

HipHopDX: This movie was absolutely stunning in every aspect.

HipHopDX: What was that like for you emotionally going to the prison and working with these inmates so closely, getting to know their story?

HipHopDX: Do you feel that you accomplished that?

Speech: Yeah, I think as usual, when you do surrender and you just go with the process, there are things that you could be of service. So yes, at the end of the day, I learned that yeah, there’s things that I’m supposed to be doing here. And it became bigger.

HipHopDX: What is it?

HipHopDX: Were you shocked at the talent that you discovered behind bars?

Speech: Very much so. Very much so. Totally so. As you can see with the film, these guys, they’re really special and what they have to say is so potent and poignant. To me, Teddy is the Tupac of this era where if he was able to get out to the masses, I think the things that he has to say would ring so true. And because of his experiences, they ring even more dire and more real. And same difference with Garland Carr. As a country artist, in my opinion, he would be a superstar.

HipHopDX: Yeah, seriously. He’s kind of got it all.

Speech: He’s a great looking guy. He’s a great singer. He’s a great player, great songwriter. But also when he talks about freedom train, it’s not just a catchy hook. There’s something there that you as a listener know there’s a real story here. And this man has lived a certain life that makes every lyric ring way more true. And that’s what I think is number one missing in a lot of pop music today or mainstream music today.

Speech: I also think that that’s what the sad part is about people being locked behind bars for non-violent crimes for this many years. That’s the sad part about our justice system in America that needs to desperately be reformed.

HipHopDX: What did you learn about the criminal justice system when you were there? What do you want to see change?

Speech: Well, a lot of things. There’s a First Step Act that the current president signed into law last year and that’s a good step. When President Obama was the president, there was another act that he was able to sign, the Fair Sentencing Act. So, the good news is prison reform is on the table. The bad news is that there still are people, particularly on the Republican side, trying to stop it at every turn. And there’s some people within this administration now who, without our public outcry, may or may not put teeth into the bills that have been passed.

There’s still a lot for us as citizens to do in order to make this issue get a little better. And even with all the things going right with the bills that are in law now, it still doesn’t take away the entire mass incarceration issue. So, we still have a lot of work to do. I think this movie can help bring light to an issue that we all just need to be aware of and that it can happen to any one of us. What’s happening to these men can happen to anybody.

HipHopDX: Absolutely. And I think one of the most striking things about the film is it humanizes them.

HipHopDX: It shows you who they are as people. It shows you how they got there. And in some cases, it’s almost like they didn’t even have a chance because of the circumstances they were brought up in. And I just think we’re doing a great disservice by not actually reforming people for their crimes. Rather, we’re just punishing them and there’s no care into actually getting them better. You know what I mean?

HipHopDX: I’m probably not the only person who says this, but Teddy’s story struck a cord with me big time. His struggles with addiction is just heartbreaking. Have you figured out where Teddy is right now?

Speech: Yes. We’re really close to Teddy’s mom and she’s in the film as well. Her name is Marietta, an amazing woman. He’s still homeless and struggling through mental illness. On the good side of it, his journey is not complete. He is still moving forward and we’re still helping and in there with him. So I think that the potential for healing and a life that’s amazing is still there. And even with this film, there is plans that I have to bring them out on the road. So, there’s a lot of things that are still in the plans for me, my crew, the people that wrote this with me and made this with me that we plan to do. There is good news in all of this and so many people know about their issues and their stories now. So it’s having an impact and I’m very grateful for that.

HipHopDX: Right. Have you talked to Teddy since shooting the film?

HipHopDX: I wanted him to see that second article so badly. I don’t know if you ever sent it to his mom, but I just felt like if he could see that his words and his story are touching people, maybe we could get him some help and get him on the right path again.

Speech: And Garland, who you could tell in the movie was really going through a lot with his girlfriend, from the proceeds of this album, we were able to get him some money and he bought her a wedding ring. They’ve since gotten married, so there’s movement here, and it’s not simple as you could tell by the film, but there is movement. And Anthony has been in and out of jail even after the film ended. He came out as you could tell in the film and he had, unfortunately, gone back in and he’s back out again. There are some realities that he’s still facing. Then Devonte, because of a parole violation, went back in. But we’re expecting him to get out pretty soon.

HipHopDX: Hope is not lost.

Speech: To me, no, hope is not lost at all. I learned so much about things doing this film, but one of the things I learned is that there is a level of trauma that the system can perpetrate onto people that is very, very tough to overcome and some will not overcome it. I think the lesson in that is that we as citizens have to be proactive when we see perpetrators and actors in the political world doing horrible bills and signing into law various things or taking out of law various things that are extremely important.

We have to be very diligent to make sure that we stand up for the voiceless at those times as well so that we can prevent these things from happening in the first place. There’s laws that we can help to bring to the forefront that can really help people in the first place. And that’s one of the things that I want to make sure I say more and more as we screen this film because there is a lot of complexities and there’s trauma and not all of it is self-inflicted by these men. A lot of it is systemic.

HipHopDX: The way that they get treated in prison by the guards, too. That can really make you feel dehumanized and that’s a whole other issue. You walk away feeling like you’re just some sort of dog in a cage and that’s not OK.

Speech: And that’s exactly what Teddy said in his rhyme.

HipHopDX: Oh wow, you’re right. How did you change throughout this process? How are you different person coming out on other side?

Speech: Similar to what you were saying, just understanding that humanity. I no longer feel like I’m talking to a prisoner. I feel like I’m talking to a person in transition. And that is probably the biggest difference that I see for me. I have a deeper understanding of the humanities. I think this movie does a great service in my opinion in the sense that a lot of us have been conditioned to believe criminals equal bad guys and not looking at the full story of the life and understanding what exactly is going on.

HipHopDX: And we’re running into a lot of that too with a lot of current mainstream rappers, they’re getting locked up every other day — Tekashi this, Kodak Black that, 21 Savage arrested. We don’t really get a chance to dive deep enough into their story. As a journalist, I wish I could talk to everybody and get to tell their side so they don’t just look like, “Oh, we’re these crazy criminals.” I want the full picture.

HipHopDX: I want them all to win. Teddy to me just really resonated with me. And like you said, his words were so profound and he’s got a special skill. I hope he can get it together.

HipHopDX: Definitely. What made you want to make this film to begin with?

Speech: Well, I knew that the prison system is unjust — period. I knew that was an issue that needed to be further expressed into the mainstream culture and more things needed to be done about that. So when I saw Lisa Ling’s special on CNN — she has a show called This Is Life — she did this piece about a daddy’s daughter dance that was in the exact same jail that we ended up filming in. I talked to my manager and I was like, “Yo, whoever the sheriff is of this place, for him to let them have a daddy daughter dance with such dignity, no bars in between the family members, it was such a visionary thing to do.” I said, “I really want to talk to this particular jail and see if they’d be willing to do anything else.” And here we are.