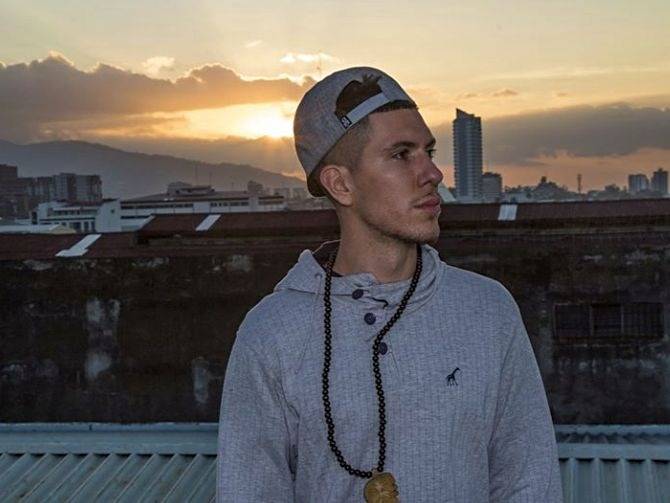 The New Mexico Hip Hop staple was struck by a drunk driver in Santa Fe on Sunday night (November 3). He later succumbed to his injuries at Burque’s University of New Mexico Hospital at 2:48 a.m. local time on Tuesday (November 5).

As part of the vigil, several Native Americans performed a traditional Nahua send off, ushering him to the next chapter.

“Andy ‘Wake Self’ Martinez was family,” longtime friend and collaborator César Montaño told HipHopDX. “He meant so much to the New Mexico and Southwest Hip Hop community. I will cherish the memories we had together and continue to try to carry on his legacy in this world. Skull Control Por Vida.”

Zumbi of Zion I, who toured with Martinez throughout New Mexico, remembers how welcome Martinez made him feel. He even took Zumbi to meet his parents following a show in Gallup.

“I met Wake Self on a chilly night in Durango, Colorado,” Zumbi tells DX. “We were both performing at the Animas Theatre along with Masta Ace. During my sets, I always like to invite dope MCs to hop up and freestyle with me. I was juiced to have Masta Ace in the building, as I grew up on his music and was excited to pass the mic back and forth with him.

“When the freestyle section came up I called Ace but instead, Wake bounced onto the stage. I looked at him critically for a split second, unsure of who this character was onstage standing in front of me instead of Masta Ace. He picked up the mic and started flowing and my mood immediately changed! Dude had bars, punchlines, comedy, and confidence. We went back and forth several times as the crowd became more and more excited. Once we finished I knew I had to holla at him after the show.”

The two MCs exchanged contact information and Zumbi walked away with the memory of him as a “fearless freestyle titan,” the kind of MC he likes to surround himself with on the regular. A few months later, they connected on a New Mexico tour alongside DJ Element.

“Immediately, I was struck by the sensitivity and spiritual nature of the brothers I was crushing with,” he recalls. “All we did is talk about spirituality, Hip Hop, the ancestors and ways to combat the wicked. It was calming and enlivening to be with cats who I was just getting to know, but who were embracing me like family right away. The tour was dope as fuck. Every show was packed with indigenous folks who were connected with Wake’s passionate energy.

“He had brought me into a whole new world and I was wide eyed and appreciative. What really stood out was that after the show in Gallup, his hometown, his mom and dad met us at a small late night sandwich shop and we all sat down and chopped it up. It was simple, beautiful and incredibly genuine. That simple act alone made me feel like I was really being embraced. Family is sacred, and Wake was one of those dudes who felt you out from faraway and already knew if he was comfortable with you from the jump.”

Thinking bout my homie @wakeself today..remembering his calm energetic vibe. This was taken after our first tour with @djelementaz 🔥🔥🔥 Trippy that my boy is in the realm of the ancestors already. But it lets me know that his energy is still present at the same time. This life is a mystery 🔥 and I am bewildered by it’s beauty. Rest well cousin ☯️

Zumbi and Martinez were actually plotting some shows for December, and they’d been in touch more frequently in order to get all of the dates locked down. He was crushed when he found out the news. In fact, he could barely hold it together.

“The last few times I talked to him, he was speaking about how his sound was changing and how much he had been in the lab focused,” he adds. “I really felt like he was on the verge of something big by his energy and enthusiasm around his new work. It hit me sideways when Bear (a dope female MC from Taos NM) hit me on IG and told me Wake had passed.

“I immediately hit up Def-i, his best friend, to confirm this crazy talk. He hit me right back and said it was true and that he had been with him in his last hours. I broke down on the spot in my sons’ pre-K classroom. I had to take a seat. My middle son intuitively came and hugged me as I cried for the sudden death of my homeboy.”

With sadness and disbelief a kindred soul passed away this morning. @wakeself was a dude I met a few years ago and immediately bonded with. The first night we met was at a show in Durango and he hopped up and gassed a freestyle with me. We’ve been vibing ever since. We did a few tours and a gang of shows together…and the dopest thing was all the building we would do during the long drives. A kindhearted and intentioned spirit..this brother had a lot more to accomplish in my opinion. But the Most High knows best. Prayers up for all his family and friends. This one hit me sidewise..as we were planning on hitting the road again in December. This life is fragile. Let us spend our time loving those we care about and enjoying the grace that God has provided us. Rest In Peace Young Andy..until we meet again 🙏🏾🔥🙏🏾🔥🙏🏾

At the end of the day, Zumbi recognizes life is a mystery and the “Most High knows best.” He’s just grateful he had a chance to connect with someone like Martinez before he was taken. He has a feeling Martinez will there for him in death, too.

“I remember Wake telling me once that he was no longer scared of death,” he said. “I tripped out when he said it. It was during one of our long drives and we had been talking for like three hours straight. His new album is called Ready to Live. It’s all so wild to me and my mind is trying to connect all the dots. But I also know that there is much to this existence that I will never understand logically. I just feel like he was really ready to live.

“He had mastered this level. Rest In Peace brother. I know you are still with us. I have felt your presence onstage already — that same easy bounce, eager to crush mics and lift spirits. My prayers go out to your family, all those who loved you and all the lives you touched. Heaven has gained another angel. We will be calling on you in times of need, and I know you will be there as you have always been.”

Martinez, who only 30 at the time of his death, was preparing to release his next album Ready To Live. He had an album release party planned for Thursday (November 7) at Meow Wolf in Santa Fe.

Pichardo was charged with aggravated driving under the influence, driving with a suspended license from a previous DWI charge and two counts of causing great bodily harm while under the influence. In the wake of Martinez’s death, a Santa Fe police spokesman said he could face a charge of vehicular homicide.

Martinez’s music speaks volumes on what he stood for as an artist, activist and human being. His new song, “No Vacancy,” was released on the day of his death. His previous album, 2016’s Malala, tackled the dangers of misogyny and the effect it can have on young girls.

“To me, real Hip Hop respects women,” Martinez told HipHopDX in 2016. “The world is out of balance. We are all affected by a history of objectification and gender inequality. Our pop culture and entertainment industries have accepted the degrading of women, and it’s marketed and sold to us. For anything to change, we must respect life. The lack of respect for women is an issue for all humankind, not just women. Our mothers, daughters, sisters and earth are sacred.”

Martinez will be sorely missed by all of those who knew him or listened to his music.

Check out some of the photos from the vigil below.

@wakeself You will never be forgotten..last night was living proof of that. Talking to one of my friends at your memorial about how #music brings us together…I felt that last night. God bless you and your family and thank you for the love and light you brought to our community 🙏 #wakeself #wakeselfforever #burque #nuevo #nuevotrue #rip #hiphop #musicthehealer #nicopicpics #streetphotography #igersabq #onelove