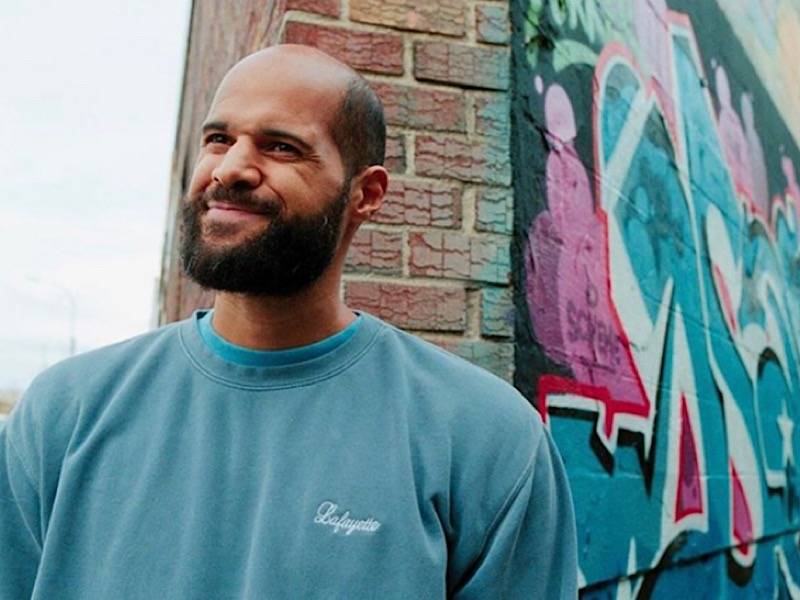 New York, NY – Humbly overlooking the apex of artists who thrive outside of the mainstream music industry “system” (without the necessity of gimmicks) stands Queens, New York-bred MC Homeboy Sandman.

Supporters immediately attest to and swear by his oddly calming melodic tone and flow that often borders on conversational. Not to mention, the difficulty they share in accurately classifying his music.

As he tells HipHopDX, the delivery is by design.

“Probably my worst nightmare is to be classified,” he says bluntly. A large part of his aversion to catering his sound to any specific sub-genre or boundary seems to stem from the core reason he makes music.

“I wrote a rhyme this morning to keep from going crazy, man. I think that’s what keeps me motivated … everybody has their reasons for the creation they do, whether it’s music, visual art, architecture or whatever,” he says.

“For me, it’s very much about not going crazy.”

An accidental pre-interview call to the rapper — roughly an hour too early — was met with an answering machine recording of him singing an excerpt of the popular 90s cartoon Duck Tales. “It used to be Madonna’s ‘Like A Prayer,'” he reveals when asked about it.

This easter egg of sorts beautifully illustrates the core elements that make him so appealing to his fans: subtle wit and an endearing sense of humbleness.

“I don’t know that I’m a gifted industry participant,” he says. “But, I feel grateful that I’m able to share something that I look to for very personal reasons and that folks can appreciate it.”

It’s this definite sense of easy-going equilibrium that is exuding from his ninth studio album Dusty, his first release on Mello Music Group. As he explains, it was in embracing his true self musically that he was able to create the most infectiously optimistic body of work to date.

“I was in a great place when I made [Dusty] — I felt a lot of contentment and a lot of joy,” he exclaims.

“Earlier in my career there was a ‘This dude is a very bizarre person’ aura that surrounded me … I was comfortable with it,” he explains. “But over time, I have felt like that I’m a little too out there. On a personal level — not that I’m too out there for people listening to my music. I’d be like, ‘Is this healthy?'”

He continues, “There are parts of me, parts of my psyche and my identity — my id — that I kept in check for a long time, you know. I’m allowing those to flourish and surface.”

The project’s title can be taken quite literally (as it sports a dusty vintage aesthetic). But, there’s also has a more thematic element to the concept.

“I started picking up old books, looking through old notebooks and old photo albums,” he says. Portions of the two-year creation process, he notes, were done while he temporarily unplugged from the world. “It’s like I opened up a whole room in all my mind, and everything in there was dusty.”

Formerly part of the Stones Throw Records roster (arguably ground zero of modern alt-Hip Hop royalty), he says his move to Mello Music Group was one solidified primarily on admiration for artists he’s genuinely been following of for years.

“I appreciate the fans of independent music … they make these labels work,” he says. “Mello, in particular, has some of my favorite artists. There’s Oddisee, who I’ve been a huge fan of for a long time … also, Quelle Chris is arguably one of my favorite cats making music right now.”

Though it’s been over two years since his last solo album, Homeboy has been far from inactive. Just last year, he reactivated Edan to collaborate for the Humble Pi project. Creating with others has been a pretty consistent theme in recent years. In fact, preceding Veins was Lice Three: Triple Fat Lice with Aesop Rock.

As with everything, his long-form collaborations are organic and never forced. Following a pattern that seems to have emerged post-2016’s Lice Two: Still Buggin’, another team-up is on the way, though he’s mum on the details.

“I’m not going to announce anything, but I’ve been working a lot with somebody … It’s somebody I haven’t collaborated with before,” he says — making guessing almost impossible.

He also notes that he and Dusty’s lone producer — longtime collaborator Mono En Stereo (formerly El RTNC) — have some leftovers that could be released in the future. “There were some songs that we did that weren’t right for this album,” he explains.

Dusty Tour – East Coast Leg is a go! Blessed and honored to be joined on each date by one of three legendary talents, billy woods aka @backwoodzstudioz , elucid aka @cobratoof , and quelle chris aka @quellechrist . tried to tag all the venues but they were too close together my fingers are too big but find your city and visit homeboysandman.com right away to cop tix. hyped to see you!! #DustyTour . . . btw ill ass flyer by @lankstonhues 🙌🏽 and @moniklz will be all the decks all tour!!

Nothing about Homeboy Sandman’s story on wax is linear. However, it’s clear that in opening himself up on this new record, he’s unlocked new plateaus of creativity.

For an MC who could conceivably eat up most of the artists currently basking in the mainstream’s limelight, he doesn’t seem to draw satisfaction from winning as much as thriving without compromise — creating out of nothing else but the pure love of the output.