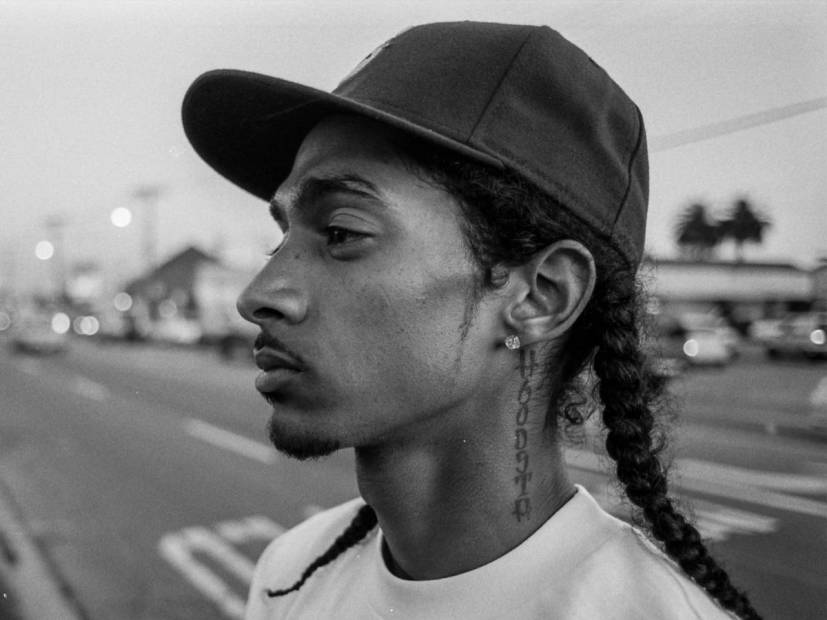 Los Angeles, CA – As we look back decades removed from the “golden era” of Hip Hop, all that we have left to supplement the memories is the music and the photos. For those that have lived in or followed the West Coast in particular, Estevan Oriol is an integral part of those memories whether you know it or not.

Oriol, whose new book This Is Los Angeles is out now, got the photography bug from his father, who was a community activist utilized photos of the city to encapsulate all aspects of his proud Logan Heights (San Diego area) community.

In true Cali fashion, Estevan got heavy into lowriding and then also found himself working for some of the seminal Hip Hop acts of the 90s.

“In 1992 I was tour managing House Of Pain and lowriding East L.A. and someone was like ‘you should document both of those things that you’re into,’ so I took the camera to one of my lowrider car shows and then I would take the camera on tour with me shooting backstage and tour life,” Estevan told HipHopDX in an exclusive interview. “I didn’t do it with any intention as a photographer, I didn’t come at it like that and I see that that’s how people do come at things now. If I would’ve known that then I could’ve documented the shit out of that and I would have had more shit than anybody,” he added.

While photography started out as more of a hobby it was lowriding that would allow Oriol and his partner Mr. Cartoon to see some actual dividends from their work.

“We had a guy in our car club from Japan cause with lowrider clubs there’s different chapters in different cities. Our car club was only one chapter in the world and if you wanted to be in our car club you had to be in that area so they told this Japanese guy in our area named Oishi if he wanted to be in Lifestyle he had to move to L.A. and come to the meetings here, build his car here and low ride here in L.A. He closed down everything he had in Japan and moved his whole family to L.A. and built some of the best lowriders ever,” Estevan recalled. “He had a friend in Japan that had a magazine called Fine. It was a culture magazine like skateboarding, surfing, Hip Hop, everything. They would feature different parts of those cultures as well as the fashion. It was basically a catalog for different cultures. They gave us two pages and we called the feature ‘Low Life.’ I think we used to get like $400 or $500 a page. I would do the photos, Cartoon would draw around the photos and we would send the boards to Japan.”

Akin to the lowrider photos, Oriol soon found Hip Hop to be another worthy side hustle as he began working with Cypress Hill.

In the Hip Hop world, because I was a tour manager I set up all the press, so the record label would say ‘hey you have four interviews. Give each person 15 minutes and knock that out with the guys, so I would set that up and each time the press … sometimes the photographer would be struggling, the last three minutes of the 15 to take 10 pages worth of photos and I could see it was torture for them. I had photos of the backstage lifestyle as well as them on stage so I told them ‘if you guys want live show or backstage photos I have some,” Estevan remembered. “At first you could see the reactions of the magazines like, ‘the fuckin’ roadie is trying to give us his tour photos,’ but as they got to see them they were like ‘wow, you took these?’ So they started licensing my photos. After that I just started hustling my way in with some of the Hip Hop magazines, and then we had that lowrider thing going on every month so I had a steady side hustle going, he added.

Among the many icons that Estevan has captured was the late Nipsey Hussle. A man that he remembered above all else, for his authenticity.

“Nip was cool. You go to come people’s hoods and they’re kind of nervous to be out and be seen because everybody knows them and maybe they’re like ‘I don’t wanna be out on the streets cause this dude got shot last week or whatever, but Nip was like ‘What do you wanna do? Where do you wanna go?’ He was down for whatever,” noted Estevan. “I remember some people came by that were maybe from an enemy neighborhood and he was like ‘whatever happens happens.’ That showed me what kind of guy he was. He wasn’t just claiming the fame of living in the hood he was really with the business. I knew I was with a real one,” he added.

Though he may not have known it at the time, the photos that came from those sessions with Neighborhood Nip would become an immortalized part of not only Nip’s legacy but of Los Angeles.

“I photographed Nipsey a couple times in 2008 and 2009. Those photos mean a lot to me cause he’s such a staple in the city and those pictures are from early on in his rise. They ended up painting two of my photos into murals in the city. That’s been such an honor to have a photo you took of somebody memorialized by another artist like that,” said Estevan. “I have a couple of him that I really like. I have one that’s in color and he’s standing outside Hungry Harold’s, there’s the Slauson Donuts sign in the background and then you see The Marathon building which he ended up buying later on. That was cool to just have him on that block, doing one of his first photo shoots ever with the building that he would later buy. Then to have those photos put up as murals in the city by two of the dopest artists, one of them is Argon and the other one is Never from the Cult Crew. If you’re gonna have somebody paint your pictures you want them to do it. To have that done by those guys of him at that time, you can’t beat that.”

Click here to preview or purchase This Is Los Angeles