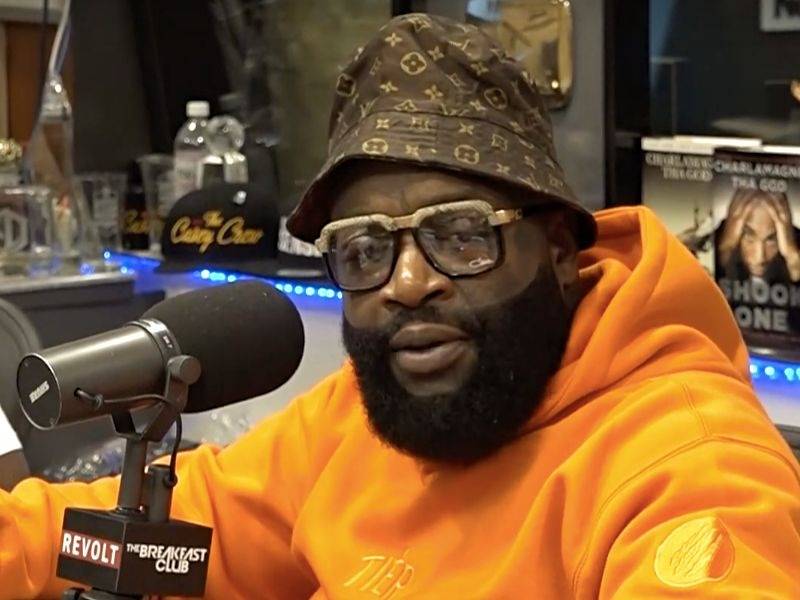 Rick Ross stopped by The Breakfast Club this week to discuss Port Of Miami 2, his forthcoming memoir Hurricanes and a bevy of other topics. After revealing he used to sleep on Erick Sermon’s floor back in the day, he was inevitably asked about the comments Nicki Minaj made about him during a recent episode of The Joe Budden Podcast.

Nicki claimed she went to speak with President Obama about Meek Mill, her boyfriend at the time, and saw a text from Ross calling her a “keeper.” So when Ross dissed her on 2017’s Rather You Than Me track “Apple Of My Eye,” she told Budden she believed it was a cheap tactic sell records and ordered Ross to “sit your fat ass down.”

What’s ya favorite track off that #PortOfMiami2 album?? We got #RickRoss on the show right now LISTEN LIVE ?

Ross explained to The Breakfast Club (rather diplomatically) that Nicki was an obstacle between Drake and Meek back then but is grateful everyone moved on.

“I mean, if somebody went to meet Obama with you, she is a keeper until you find out otherwise,” Ross said. “She was around me a few times but other than that, she was a huge talent but she was playing a very important position at the time. She was in between Meek and Drake at the time. And what she don’t know, and what she might not understand coming from a big homie like myself, playing that position, that was a very fragile role. And it would be very easy to put that responsibility on her. But that ain’t what I tried to make it to.

“But most definitely when I seen it go sour, it would be easy to assume she may have had something to do with that and if somebody tells you they didn’t, they’re lying. But everybody moved forward. She moved forward, she doing her thing. I’m happy to see her do that. Meek doing his thing. Drizzy, they doing they thing.”

Elsewhere in the interview, Ross opens up about his various business endeavors, his relationship with T.I., health issues and more.