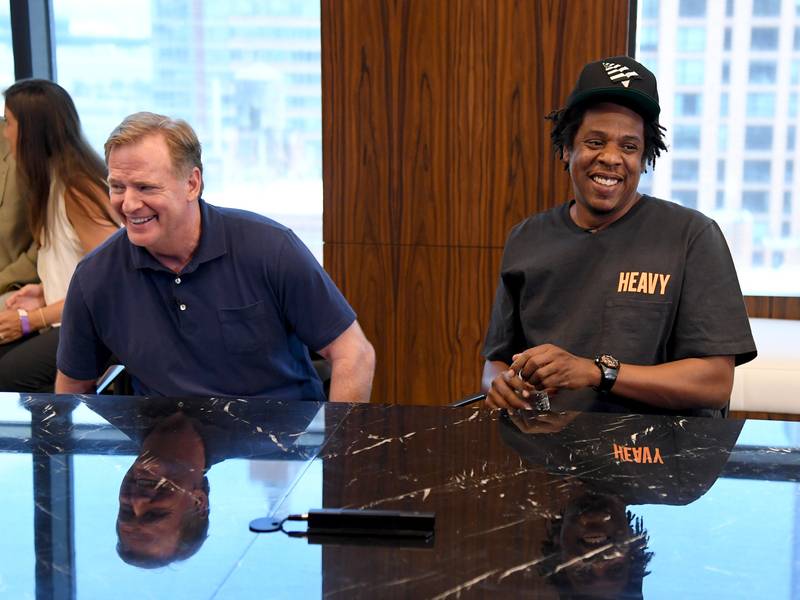 New York, NY – JAY-Z and Colin Kaepernick have conflicting stories about whether or not the two had a conversation prior to the announcement of Roc Nation’s deal with the National Football League.

On Wednesday (August 14), Hov told reporters he spoke to the former San Francisco 49ers quarterback before announcing his partnership with the NFL. Kaepernick’s girlfriend Nessa and his attorney Mark Geragos deny any such talks occurred.

THIS is a lie. COLIN never spoke to Jay-Z and NFL ahead of that deal being done. They NEVER included him in any discussion 👉🏽 https://t.co/TWmoXS4JVJ pic.twitter.com/2bjSIEtnjQ

Reports about JAY and the NFL’s agreement surfaced Tuesday (August 13), but the two sides formally revealed the deal at a press conference on Wednesday. Roc Nation will serve as the league’s “live music entertainment strategist,” and Hov will be involved in the NFL’s social justice initiative Inspire Change.

At the presser, Hov was questioned often about Kaepernick. According to the New York Times, the Roc Nation boss was specifically asked about whether the QB-turned-activist, who sparked the racial injustice protests in the NFL by kneeling during the national anthem, would be involved in the deal.

Kaepernick has been out of football since becoming a free agent in 2017. He accused the NFL of colluding to keep him out of the league that same year, filing a grievance that recently ended with a settlement being reached.

While many people believe Kaepernick has been blackballed by the NFL for his protests, JAY believes his partnership with the league is about something bigger than the former QB’s employment status.

“Everyone’s saying, ‘How are you going forward if Kap doesn’t have a job?’ This was not about him having a job,” he explained. “That became part of it. We know what it is — now how do we address that injustice? What’s the way forward?”

In Hov’s mind, his deal with the NFL is the next step in following up Kaepernick’s protest.

“I think that we forget that Colin’s whole thing was to bring attention to social injustice, correct?” JAY said, according to Rolling Stone. “So, in that case, this is a success. This is the next thing. ‘Cause there’s two parts of protesting. You go outside and you protest, and then the company or the individual says, ‘I hear you. What do we do next?’

“We talked about a variety of issues,” he noted. “I think when we first met we talked about entertainment and how we do that, but the number one thing we went to was impact. We can have an impact together. We can do some really positive things in our community. So to go to JAY’s point, we listen to our players.

“We understood what our players were saying and we created a platform, in which to help drive change in communities that Colin has raised and that other players have raised. This partnership in addition to the entertainment aspect of branded football and music together is going to help us make even greater change. We call it protest to progress.”

But the deal isn’t sitting well with some observers. Kaepernick’s former teammate Eric Reid and activist Shaun King are among the notable critics.

Interesting timing on the partnership with Jay-Z on the heels of Stephen Ross’ fundraiser for Donald Trump and the backlash his other companies are getting because of it. #PayAttentionFolks

If you are baffled by the move that Jay Z just made with the NFL then you don't actually listen to his music.

He's a proud capitalist. It's the primary theme of his career.

Last year he dissed people who performed at the Super Bowl. Wore a Kaep jersey.

They made him an offer.

So the NFL is forming an entertainment and "social justice" partnership with Jay-Z and his Roc Nation agency.

Jay Z hasn't spoken with Colin Kaepernick about this and yet says he was an "inspiration."

If this isn't Black capitalism exploiting the movement I don't know what is.

W O W. So this partnership deal started that long ago? I’m just at a loss for words.https://t.co/0t4CEMQqh7 pic.twitter.com/HetB8L1uHW