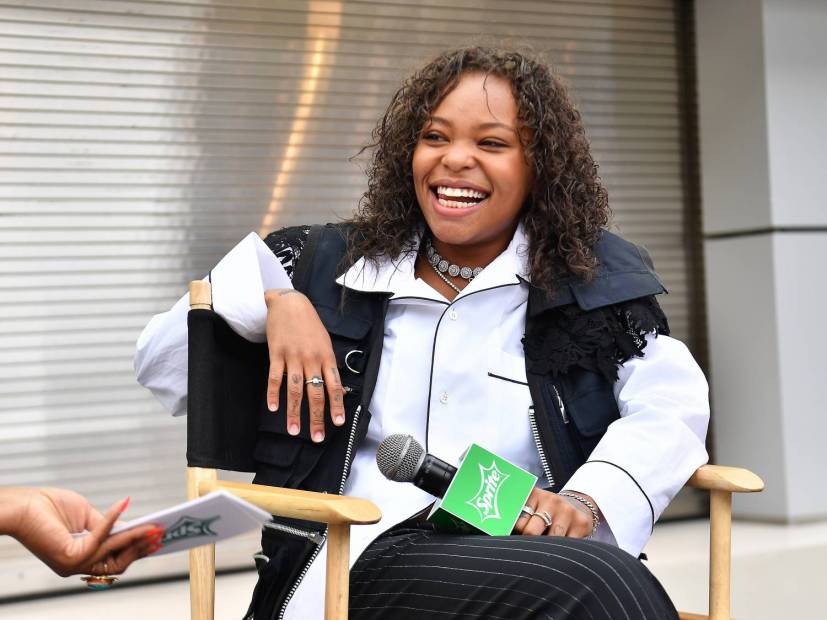 Los Angeles, CA – As a young, openly gay, black woman, Atlanta rap magnate Kodie Shane’s unique swag boasts a resilient type of confidence. She’s absolutely comfortable in taking the lead in the continuation to create fresh sonic movements no matter how many challenges are thrown her way or how many people try to replicate her style.

She actually loves it, which is why Sprite tapped her for their newly launched “Thirst For Yours” campaign. The 20-year-old bubbling rap star self-describes herself as the “generation-defining artist” in the campaign.

Sprite has consistently shown their unwavering support and love to Hip Hop culture for over 30 years, with their thumb intuitively placed on the pulse of what’s next.

Signing to Epic Records at 16 years old, the Chicago-bred talent started making waves amongst a burgeoning set of younger rap stars as part of Lil Yachty’s Sailing Team in 2016. Not only that (and drama aside), Kodie’s nonconforming tracks “Love and Drugz” and “Love & Drugz II” with Trippie Redd stand on their own as musically innovative and wave-pushing arrangements.

On Kodie’s debut LP Young HeartThrob, her distinguished style and vibe are on full display, separating her from the crop of rising female rappers.

HipHopDX spoke with the “Drip On My Walk” performer following a panel during BET Awards weekend in Los Angeles at The Terrace at L.A. Live.

We touched on her intentions to push the Hip Hop culture forward to the next era, as characterized by her “Thirst For Yours” Sprite campaign spot as well as what it would mean if the culture fully accepted an openly gay rapper in spite of its lyrical homophobic history.

HipHopDX: Sprite has shown love to the Hip Hop culture ever since I could remember as a little kid. I’m sure you know and have felt that love too. How does it feel to be part of their campaign?

Kodie Shane: I mean, it’s been amazing. They’ve been celebrating Hip Hop for 30 years, if not more. It’s a real dream come true to be a part of it now. I’m only 20 years old. I remember when the Drake commercial came out. I remember all of that, so just being a part of it now is refreshing. It’s amazing and I’m the energy they needed.

HipHopDX: And if there was a Sprite flavor you could bring back, which one would you bring back? Sprite Cranberry or Sprite Remix?

HipHopDX: I was watching the Sprite “Thirst For Yours” commercial you did and you described yourself as a “generation-defining artist.” Tell me more about what that means.

Kodie Shane: I’m the artist that defines the generation, especially when it comes to girls. I am the foundation for almost every girl artist right now. I am who they were and then they add more and they try to make it different. I define all of this. I’m in my sixth year. I’ve been rapping longer than a lot of boys been performing. Not only girls, I feel like a lot of guys love my swag and want to copy it. I define the generation. Don’t get me wrong, I love when people copy off on me because I feel like, perfect, you’re doing exactly what I want you to do. Keep doing this shit, I’ll go do some new shit and you can copy off that in 2020.

HipHopDX: Have you ever written for anybody?

Kodie Shane: I actually started off writing for a group named Charm in Atlanta and so that’s really when I started. I was really just writing songs first and I was writing a lot of songs. Then I kind of relaxed on them like, I could do this by myself, if not better now. I love to write and I’m really a writer first.

HipHopDX: How do you celebrate for Pride Month?

Kodie Shane: I love Pride so much! Me and my girlfriend put on pink wigs and took pictures for Pride Month. I painted my nails red and performed at Pride L.A. I’m celebrating Pride every day of my life.

HipHopDX: How do you feel about Hip Hop’s relationship with the LGBTQ community and Pride?

Kodie Shane: I definitely think they’re warming up to it. I was actually just talking about this the other day with my producer. We were just talking about the first true openly gay male rapper and when do we think it is gonna happen. He was saying he thinks it’s going to happen really soon. I think people are definitely starting to accept it more and him just saying that as a straight man definitely made me happy. I definitely think the world is opening up a lot more especially in Atlanta.

Happy pride from me and mines 🥺💖🦋

HipHopDX: Being a young and openly gay black woman, what kind of challenges have you had to face in the music industry?

Kodie Shane: I don’t let anybody get in my head and I don’t let anybody make me feel bad about who I am, who was born as and who God made me. I’ll never let anybody get in my way about that. I definitely think a lot of guys are sometimes intimidated because they either like me or they mad that they can’t like me because I don’t really like them back or they think I want to be them. I think guys have a problem. They always think gay girls want to be them. That’s really one of the only things that kind of gets under my skin a little. But I’m good like I’m 100 percent me.

HipHopDX: I read Brandi from Blaque is your sister! What was it like growing up and watching her do her thing in the spotlight? I’m sure there’s some influence there, right?

Kodie Shane: I mean honestly, when I was younger I really wanted to be just like my big sister. I definitely think she’s inspired me and made me who I am. I feel like watching her in my family, I didn’t even think that there were other jobs. You know I didn’t really think that. We were made for this job. I just felt like we were special and I’m a performer and I’m an entertainer and I knew that all my life. Shout out to my sister! They just dropped their album Torch.

HipHopDX: And then also I wanted to ask about your music video for “Love & Drugz II.” How did that comic book music video concept come together? It’s really dope. Do you plan on doing more with that whole concept?

Kodie Shane: Yeah, that concept was fire. I was working with a creative director and it was a dope idea. I love Trippie, but it was kind of hard to get me and him in person in the same area. We thought it’d be really fire if we put together a little like TV show. It had fire storyline so we just went with it and built it out more and more and it became “Love & Drugz II.”

HipHopDX: Any plans on making it into a comic book or Adult Swim type of show?

HipHopDX: What music projects are you working on right now?

Kodie Shane: Right now, I’m working on a few EPs that I’m going to jump this summer. I’m really excited about that I can’t say the title but the music is amazing. The music has matured, it’s growing, it’s everything you want.