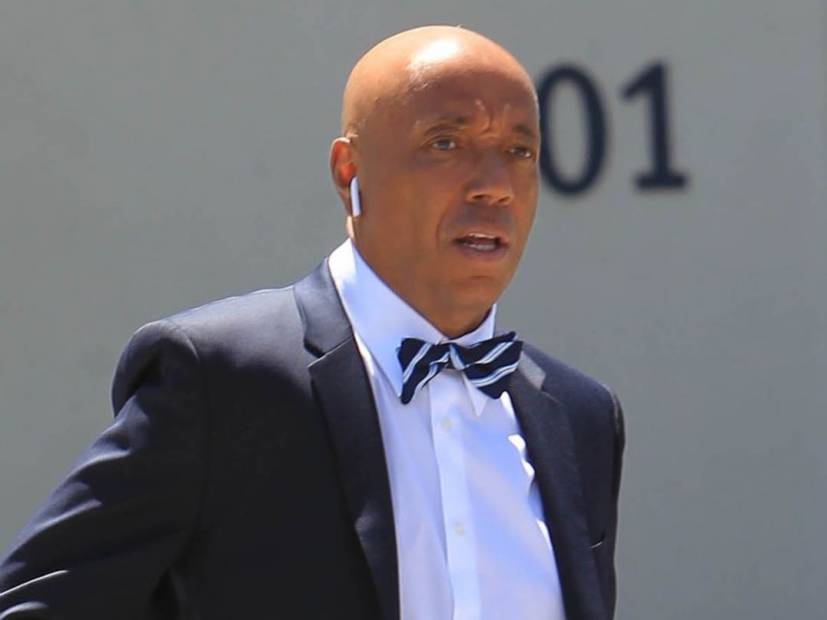 Bali, Indonesia – Russell Simmons has been in author mode for months. After wrapping up his forthcoming memoir, Confessions Of A Hip Hop Yogi: The True Life Story Of Russell Simmons, the Def Jam Recordings co-founder also carved out some time to pen an op-ed for Black Press USA about gun violence in America.

Let us come together and support the local peace keepers in our neighborhoods They are effectively doing the job of law enforcement most times w-out pay They are doing it with love ❤️ shout out to @ericaford_ilovemylife and @captmuhammad58 Who are on the ground on the grind ..two of the many organizations i have chosen to support over the years ❤️ To read my blog go to my bio

In the wake of Nipsey Hussle’s senseless March 31 shooting death, Simmons says we are “again reminded of the terrible sickness of violence in communities across the United States.”

The Simmons family suffered their own personal tragedy due to gun violence in February when Sutton Tennyson — Angela Simmons’ ex-fiancé and father of her 2-year-old son — was shot and killed outside of his Atlanta home.

But violence typically skyrockets during the summer months and Simmons is imploring anyone and everyone to support their local community initiatives attempting to help the situation.

“We should not wait for another one of our hero’s to be killed before we stand up to take action to prevent this plague of violence from continuing,” he wrote in part. “Nipsey was a great example of what can happen when a young man from our community puts his head down and transcends the traps that are laid by the enemies of our youth in America.”

I spoke of @nipseyhussle on instagram live again this morning ..The yogis believe that enlightenment can come in the moment of passing for a devotee to righteousness. The teaching says that if he or she is focused on God when they pass…then they could enter the kingdom for the last time … He was Always focused on the most high ?Our brothers mother’s words about how peaceful he looked gave me chills .. We discuss this on Facebook and instagram live today Then we meditate Join me and continue to celebrate the life of the young prophet #nipseyhussle

But how did we get here?

Simmons believes a lack of self-love and the failed war on drugs campaign contributed to the violence rippling across the U.S.

“Some in the black community are suffering from a lack of self-love, a symptom of living in a white supremacist and unequal society,” Simmons tells HipHopDX. “The war on drugs that endorsed and supported the prison industrial complex really watered any seeds of ignorance and violence.

“They took those who were formerly non-violent, diseased drug addicts, locked them up and trained them in violence and ignorance. Then, prisons release them back into our communities without help or hope. That changed parts of our culture, thus poisoning our children with the same ignorance and violence. At the core, we need to promote love and education.”

The flowers say cherish yourself …Life’s only goal is to develop a relationship with the true self or GOD …which in turn embraces the necessary compassion and love we need ….. to cherish others… #enligtenment #loveyourself

To do this, Simmons personally supports several programs nationally in an attempt to stop violence before it even starts. These programs focus on the root cause of problems by teaching children how to love themselves through conflict resolution. He’s also using technology to combat the issue.

“I’m shooting content for a conscious delivery network called GDAS Studios,” he says. “It’s a free or cheap app to teach people the sciences of yoga, giving people the tools to get out of the suffering or simply be happier.”

“MORNING DHARMA TALK AND MEDITATION”….Chase nothing but consciousness. Life is about being happy with a comfortable seat and having a state of wanting nothing. Thank you @opencircles and all of the 100 successful young people for this beautiful moment. #enlightment #meditation

On the flip side, Simmons is acutely aware some people think he escaped to Bali to avoid sexual assault allegations in the U.S., but it was crucial for him to relocate to the Indonesian island to focus on his book.

“A question I hear is, ‘Are you living in Bali? Are you coming back to America?’ I have been living mostly in Bali where I have been writing my book. It’s finished and I’m editing it now. Anyway, I’m always back and forth. I returned to Los Angeles and New York City at least six times in last year or so. I was just there for Aoki’s graduation.”

Graduation with my beautiful crazy family ❤️ next stop: Harvard #salutatorian (swipe for a visual representation of @kimoraleesimmons and @unclerush ‘s relationship)

It’s important to note Simmons hasn’t been convicted anywhere but in the court of public opinion.

“The stories from the 80 and 90s are unrecognizable to me,” he explains. “I have admitted to being unconscious, insensitive and unintentionally callous at times, but I cannot admit to sexual violence. I have never been violent to a woman or a man in my whole adult life. I have taken a total of 10 lie detector tests to prove this.

“I have very different recollections than these accusers. I will not call them liars and get into the mud. I have this example of the right way to go. When the Buddha was faced with things he believed were untrue, he would respond, ‘Is that so?’ I want to be like the Buddha. That’s the best I can offer.”

The longtime Hip Hop mogul is prepared for the controversy his story may bring, but he made it a point to addresses everything in the book.

“My book will be very controversial,” he admits. “It’s written from Bali, a place of meditation and self-reflection. My life growing up as a child, student, gangbanger, drug dealer, drug addict to my ‘escape from the hood mentality’ to lots of untold Hip Hop stories, including Def Jam, Def Comedy and Def Poetry as well as fashion, television and movie biz experiences.

“I also take responsibly for my flaws and misgivings in the past, while exploring experiences and feelings that most men have been afraid to express. The overall intent is to make the world less polarized by sharing, while laying out yogic science with intent to give roadmap for readers ‘out of the suffering that we create in the world’ and into a state of freedom or ‘God consciousness.'”