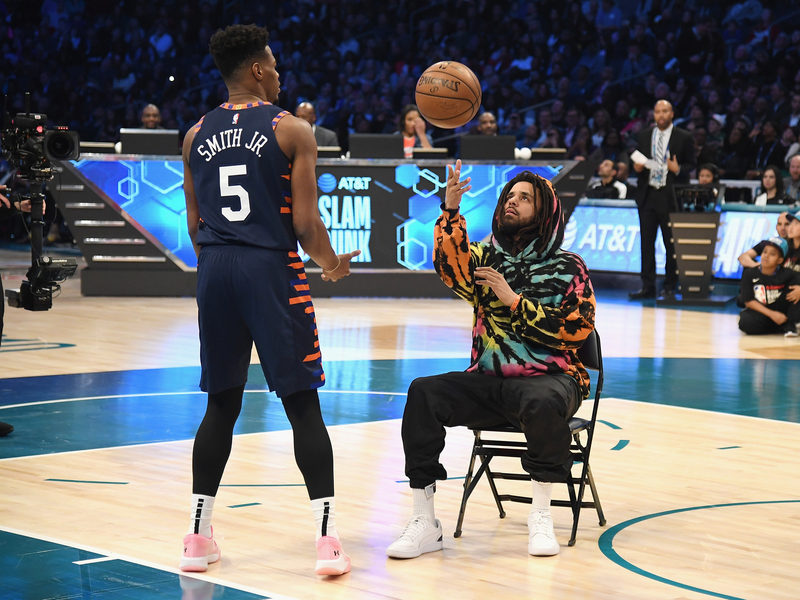 Charlotte, NC – Hip Hop got to play a small role in the 2019 NBA Slam Dunk Contest. J. Cole and Quavo each helped out with dunks during the event in Charlotte, North Carolina on Saturday night (February 16).

New York Knicks guard Dennis Smith Jr. got an assist from Cole, who tossed a basketball to the former NC State star for a dunk that earned a perfect score.

The Dreamville Records founder, who is scheduled to perform at the 2019 NBA All-Star Game halftime show on Sunday (February 17), sat in a chair while Smith jumped over him to catch the ball and slam it down. Afterward, Cole attempted his own dunk but wasn’t successful.

Later in the night, Quavo stepped onto the court to be part of Oklahoma City Thunder guard Hamidou Diallo’s final dunk of the evening. Quavo stood in front of the goal and held the ball above his head while the NBA rookie lept over him to grab the rock for the slam.

Diallo won the 2019 NBA Slam Dunk Contest, seizing the victory thanks in large part due to a spectacular dunk that saw him jump over NBA legend Shaquille O’Neal.

Check out Smith’s Cole-assisted dunk above and Diallo’s collaboration with Quavo below.