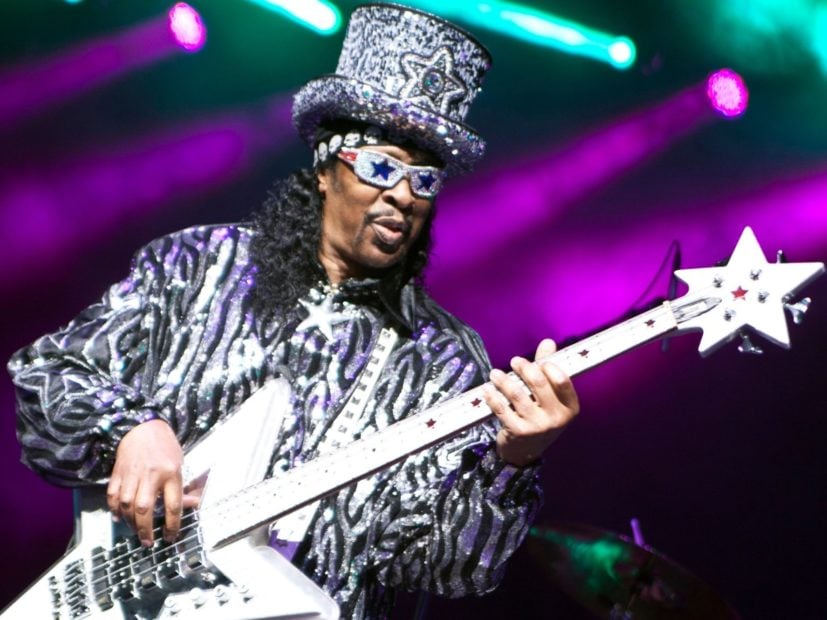 Bootsy Collins is undeniably one of the most influential bass players to ever live. As part of Parliament-Funkadelic, he helped usher in a whole new era of funk magic alongside chief architect George Clinton. The Rock and Roll Hall of Famer formed his first band — The Pacemakers — in 1968 and he’s been funkin’ ever since.

In 1972, Bootsy joined Funkadelic and continued with the various incarnations of the group for years before embarking on a solo career in the early ’80s.

But like they say, all good things must come to an end. On Wednesday (January 2), Bootsy announced he was retiring from live shows. He broke the news via Facebook and revealed the decision was essentially made for him. Bootsy did assure his fans it wasn’t the end of Bootsy. In fact, he’s going to start coaching burgeoning artists.

“Time has come for Me to tell all our Funkateers that I will Not be Playing Bass in Concerts anymore,” the 67-year-old musician wrote. “I have decided to become a Coach for up & coming Musicians. I know u r Disappointed just think for a moment how I feel. Doc said to much pressure on my Inner-Ear & Right Hand. Yeah, I had to make up my Mind so I did.

“2019 Sheriff Ping Ping Ping will continue to Funk from the Studio but Not Live playing Bass on Stage. I know u got question & I don’t have answers, maybe one day u to will understand. Just remember; That This Year will be the Funkiest Year of them All. Watch for it. Bootsy baby!!”

Last May, Clinton also announcement his retirement, explaining to HipHopDX he “funked too hard.” He’s currently on his final tour in U.S.

“I’m going to miss just doing it,” Clinton told DX. “I’ve been practicing letting the band do it though and directing but I’m going to have fun still producing the albums and keeping the concepts going. They got the new fresh energy and they’ve been killing it for the last two years. I feel good, I feel safe. I have to do it. I got the pacemaker put in, so I have to pace myself anyway [laughs].”

Parliament-Funkadelic was a massive influence on the G-Funk sound that was prominent throughout the ’90s. From Ice Cube and Dr. Dre to De La Soul and Public Enemy, hundreds of artists have also sampled the legendary group’s music.

N.W.A samples Funkadelic’s “You’ll Like It Too” for “Straight Outta Compton” while Childish Gambino’s “Riot” borrows from Funkadelic’s “Good To Your Earhole.”

One of the more blatant examples is Dre’s “Let Me Ride” from 1992’s The Chronic. The entire chorus is taken from Parliament’s 1975 hit, “Mothership Connection (Star Child).”

Revisit both tracks below.