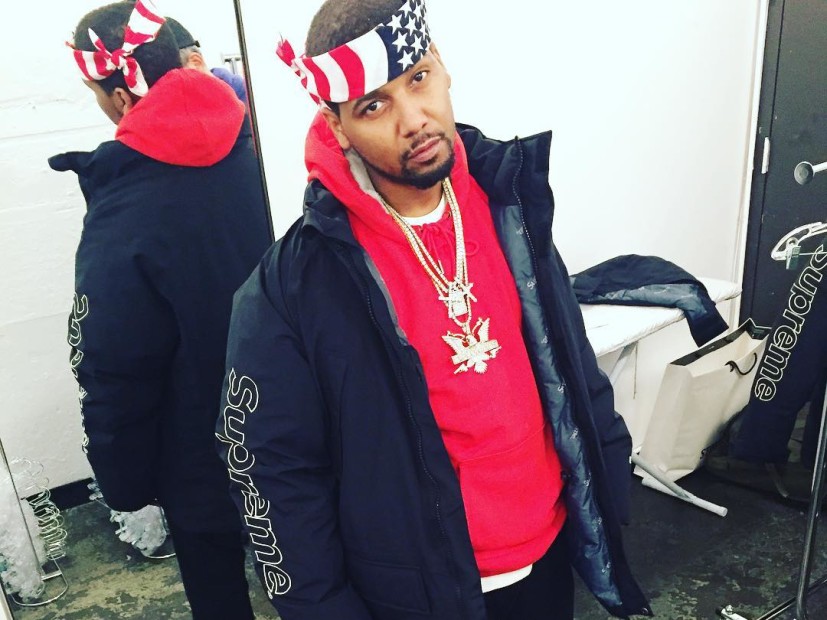 He checked in on Friday (March 1) after striking a plea deal in his drugs and weapons case, something he addressed on an episode of Love & Hip Hop: New York.

The 37-year-old rap vet was arrested last March after security at Newark Liberty International Airport found a loaded gun and oxycodone pills in his carry-on bag. He originally fled the scene but eventually turned himself in to police a few days later.

Last month, Santana married his longtime girlfriend Kimbella Vanderhee, who will presumably be waiting for him on the other side.

[This article has been updated. The last update was published on December 19, 2018 and can be found below.]

According to NorthJersey.com, the Love & Hip Hop: New York star will spend 27 months behind bars for attempting to bring a loaded weapon through Newark Liberty International Airport in March. Santana pleaded guilty to weapon possession by a convicted felon and carrying a weapon on an aircraft in August. He ultimately agreed to a plea deal.

While out on bail, Santana was closely watched by authorities. Although he had a set curfew, he was allowed to travel for work.

In a recent episode of Love & Hip Hop, the Dipset rapper revealed he’d be going away for 27-37 months, which was evidently extremely accurate.

The date he begins his sentence hasn’t been determined.

Santana was having a productive year prior to this. Last month, not only did Dipset release its first album in 14 years, Diplomatic Ties, but Santana also got engaged to his longtime girlfriend Kimbella Vanderhee.

[This article has been updated. The original version was published on December 10, 2018 and can be found below.]

Juelz Santana is going away for at least two years and some change. During Monday night’s (December 10) episode of Love & Hip Hop: New York, Santana headed to court for sentencing in his weapons case.

Before Santana goes in, he explains to his fiancée and co-star Kimbella that the plea deal would land him behind bars for 27-37 months, but if he headed to trial and was found guilty, he could receive 47 to 57 months.

“This whole situation has been an overwhelming nightmare,” he says. “And even now, it’s coming down to the wire, and I still don’t know what decision I’m going to make.”

After Santana emerges from court, he explains why he decided to take the deal, which he’d been negotiating since August.

“So I decided to take the plea,” he says. “I felt like it was the least selfish choice for my family. I still don’t have no full closure because at the end of the day, I know the final decision is on the judge. He could give me more time than I agreed on. Just when I felt like I was going to be getting some closure, the problems just begun.”

Back in March, the Dipset rapper fled the authorities after Newark Liberty International Airport security found a loaded .38-caliber handgun and unprescribed Oxycodone pills in a carry-on bag with his identification tag inside the luggage.

Santana eventually turned himself in and was charged with carrying a firearm on an aircraft and possessing a weapon as a previously convicted felon.

Elsewhere in the episode, Kimbella confronts Santana about his drug addiction and opens up about how his trial his affecting their family.

Kimbella tries to tell Juelz how the family is being affected by the trial. #LHHNY