Review: Dipset Returns Without A Splash On "Diplomatic Ties" 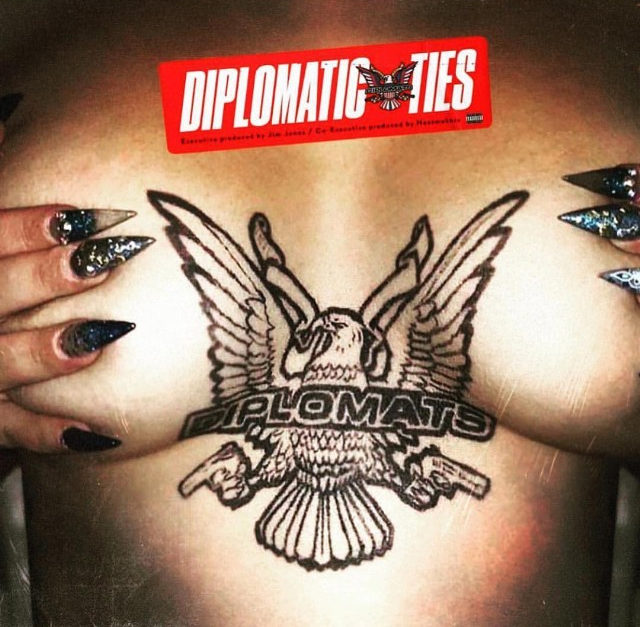 It’s been a (very) long time, but The Diplomats — in their true Voltron formation — finally made good on a promise to deliver a brand new project. For some, It had been a frustrating decade watching seemingly petty Dipset beef force potential reunions to slide by like they were on the same thing that Gretzky skate on. Vintage Cam references aside, the short-and-sweet nine-song project has its share of moments, but whether it ultimately satisfies fans who have been anticipating its release for what almost amounts to Bhad Bhabie’s entire life is another story.

Diplomatic Ties comes out swinging on the Trav featured intro, which sees Cam’ron (once again) dedicating some heavy shade towards his one-time labelmate/collaborator Kanye West, calling him — among other things — an Uncle Tom and a “tourist,” all while mocking his alleged bipolar disorder diagnosis.

The crew then assemble for the oddly familiarly titled “Dipset Forever,” which is actually one of the few places where they make any mention of the elephant in the room, which was a decade of very public feuding. “If ain’t Jones, nigga, I don’t make up with ’em,” Killa raps, with Juelz later alluding to the fact that through it all the members did their part to keep the collective brand relevant.

Throw in The Heatmakerz produced single “Sauce Boyz” or the Cool & Dre produced “Dipset/LOX” joint (not to be confused with “D Block/Dipset”) in with the above examples, and this project has itself a certified highlight reel. But, as we all know, highlight reels — by nature — leave out the parts that don’t sparkle as bright.

While nobody goes to a Dipset party for deep retrospective listening experiences, the lines between fact and fiction feel blurry at times, like Jones proclaiming “We got the money, but still we sellin’ birds to get a rep” before adding “That’s true” in his signature adlib style, which feels silly. As do sometimes lazy bars by Juelz, like on the Tory Lanez featured “No Sleep,” where he spits “I get her so wet it’s spillin’ like she peed,” which is gross and wack at the same time.

Another example is on the ultra dope flip of Smiff-N-Wessun‘s “Bucktown” by mixtape legend J. Armz where Juelz is over-trying to capitalize on the memorable use of “Dipset” as a chantable chorus centerpiece.

All the pros and cons of this project are capped off with the Un Kasa performed outro, which is not only one of the most exciting performances on here, but also — as per the producer J. Armz’s Instagram — about to be the next video release.

Some missteps aside, Dipset is pretty much true to exactly what you want from Dipset — which, after all this time is smart business. Considering the minds behind it, and the immense amount of side hustles they have between them, it’s only natural to expect them to know their audience. Now that their muscles are warmed up, hopefully they can move forward with a true victory lap.