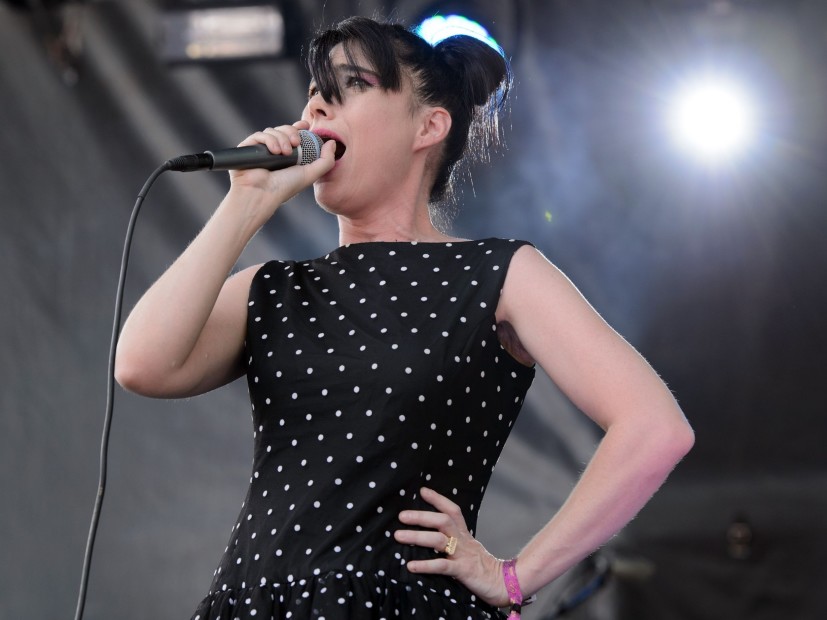 Following a recent launch party, the Riot Grrl pioneer noticed the Ad-Rock shirts were outselling hers.

“We had the party the other night, and we built the store in this little room in our house and sold t-shirts,” Hanna tells HipHopDX. “The next morning, we were looking at the stacks that were left and I was like, ‘There’s only three Ad-Rocks and there’s like 12 Kathleens.’ What’s going on? [laughs].

“Then I looked at the web store to see in two days how much we sold, and I was like, ‘He outsold me again.’ But actually Chuck is a very big seller, too and I’m very happy about that because I’ve been wearing that shirt a lot. I love that shirt.”

Free tee shirt to anyone who can guess where I am. @tees4togo

Hanna has always had an affinity for Public Enemy, so putting the group’s mastermind on the front of one of the shirts made perfect sense.

“Fear Of A Black Planet was so big for me,” she admits. “I used to listen to it on my days off with Bikini Kill when we were touring. I would jog to sort of get rid of the stress. I’d listen to Fear Of A Black Planet on repeat, on my cassette Walkman [laughs]. Beside Bob Marley, this was the first music that I heard where the political message and how good the music was went complete hand-in-hand with each other.

“So often the music suffers, but the craft and the beauty and the art of it can suffer ’cause you’re trying to get this idea across. I definitely had songs that I feel like they could have been a lot better than they were. Fear Of A Black Planet was like the goal. It was the thing that I would listen to and be like, ‘Someday, I want to make music that is this acceptable politically and just sounds so good that you can’t stop listening to it.”

She adds, “Then when we played in Honolulu, Hawaii one time, Public Enemy had played there on the same stage and I kissed the stage [laughs].”

Heading to work as myself. Wearing a shirt with myself on it. You can buy this tee and the money will send a girl to school. @tees4togo link in bio

All proceeds from the Tees 4 TOGO sales are being donated to the Pasadena non-profit Peace Sisters, which was founded two years ago by West Africa native Tina Kampor. For every $40 t-shirt sold, an African girl can afford to go to school in Dapaong, Togo for an entire year. The idea was brought to life after Hanna realized she didn’t have a Kathleen Hanna shirt of her own.

“I would see girls at shows at wearing Kathleen Hanna t-shirts and I was like, ‘I don’t have a t-shirt. What?'” she says. “My friends were like, ‘There’s tons of shirts of you on Etsy and stuff, and I’m like, ‘Oh, I should make one and just give the money to a non-profit that I care about.’ That was sort of how it started and then it just kept building and building through friends.

“Some people who I brought in I’m really, really close with and some people were mutual fans of each other’s work. Every single person I asked was like, ‘Yes, let’s do it.'”

Now as the ambassador of Peace Sisters, Hanna is more committed than ever to help as many women get an education as she possibly can.

“With the t-shirt sales, we’re really hoping that the first group of young women are gonna be able to attend college,” she says. “It feels great because I hooked up with somebody [Kampor] who totally has their shit together and who has a non-profit with a great bunch of volunteers who work for it. And they cross their t’s and dot their i’s. I go to their board meetings. I know a lot about this organization.”

At the end of the day, Hanna’s mission is the same as it was when she called for “girls to the front” back in the 90s — empowerment.

“This is about empowering women to be able to make it on their own and to not have to stay home and just take care of doing farm work, doing housework, taking care of other children, but being able to go to school and get an education,” she says. “This project has actually helped me a lot, to have something really positive to focus on, especially with what’s going on with our government. Trump’s gonna say ‘Africa’s a shithole’ then how do I react?

“I’m gonna start Tees 4 TOGO. I’m gonna be an American citizen who actively disagrees. I want to hear the voices of women from Africa. We don’t hear their voices. We’re not hearing everyone’s voices. Women in poverty is not just a U.S. phenomenon. This has to be something that includes, invites and is acceptable to all women. How are women going to write down their stories or their ideas or their amazing albums that they’re gonna write if they don’t know how to read and write?”