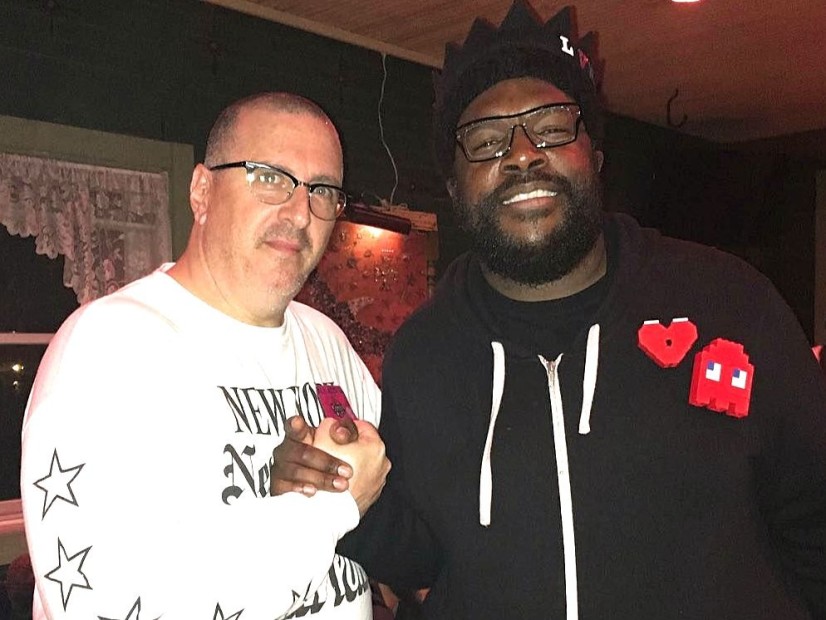 Orlando, FL – Fans of 3rd Bass have been asking MC Serch when he’s going to write a book and release a solo album for years, but he was having trouble fitting it in his schedule. Now, the time is finally right.

Earlier this month, the Queens native launched a Kickstarter campaign for his newest endeavor Did You Hear The One About, which would serve as Hip Hop’s first novel and album combination. With the encouragement of producer Temper3000, Serch is simultaneously crafting them both. Here’s the twist — each song coincides with a chapter in the novel.

“We started talking about this literally in February of last year and things just became super hectic,” Serch explains to HipHopDX. “We started a new production company. We were pitching shows and doing things. But I realized the slow period of the year for me is December and January. That has been that way consistently forever. With the exception of touring, the end of January is really when I have family time and me time.”

Thank you to @methodmanofficial for the love and support always. He knows the book/Album is going to be official like a ref with a whistle. go to the kickstarter link in my bio and be a part of this historic journey. Also some cool one off events in the works…one love! #hiphop #oldschoolhiphop #boombap #methodman #mcserch #3rdbass #wutang

Serch decided to go the Kickstarter route to bypass the pressure that often comes with finding a publisher.

“I don’t wanna go and try to solicit an album either because labels don’t give a shit about an MC Serch record and that’s fine. I don’t have a problem with that either. There’s a select few heads that want both. So I said, ‘You know what? This is probably the best idea to do a Kickstarter with the philosophy being if we raise the money great, and if not, great. No one gets hurt.”

"Did You Hear The One About" Stories/Music from M.C. Serch by Michael "M.C. Serch" Berrin — Kickstarter https://t.co/PRInxhLtkf

Considering the project’s title, Serch knows people will be expecting to hear some untold stories.

“There’s stories that many people have heard,” he says. “The M.C. Hammer story and the Bushwick Bill story are a couple of more well-known stories, but they’ve never really been in novel, chapter detail. Usually they are soundbites because when you are telling those type of stories — even when it’s a podcast — it’s limited to the amount of time you have on the radio. So, I’ve kind of turned it into a soundbite type story, but there’s a lot more depth to those stories. There’s a lot of things that I haven’t discussed in-depth, which is Jam Master Jay and how important he was in my career in getting started, my relationship in the early ’80s with Hip Hop … just a whole bunch of things that I’ve never discussed.

“I’m gonna talk about my relationship with Pete and Daddy Rich and how 3rd Bass came about but also funny stories about us and Flavor Flav on the road. There’s a lot of balance between really funny stories, really interesting stories, really cool stories, but they are all things that have happened in my life and things that I think that are going to be interesting to tell in novel form but also I think are gonna be a lot of fun to create songs around.”

Serch has received plenty of support from his peers — from Questlove and Chris Rock to Public Enemy’s Chuck D and De La Soul.

“The feedback and support has been amazing. Questlove did a really cool thing in front of 80,000 fans in Barcelona. It’s really been a blessing. Like I said, I don’t want there to be any risk to anyone. Again, if it happens I would love to do it, but if it doesn’t happen, everybody gets their money back.”

In addition to an audio book and album, there will be other iterations of Did You Hear The One About.

“There’ll be a Kindle version of it eventually,” he explains. “People that purchase that level will get the Kindle book immediately. Based on the people that invest, there will be signed versions of hardcover books that we’re gonna be making in paperback all the way up to a deluxe box set, which includes the hardcover, the paperback, the CD, the cassette, the vinyl, all of that stuff.

“So again, it depends on somebody’s desire, but the beautiful thing is that we have met with manufacturers who are down and are like, ‘Yo, I got you.'”

On Thursday (October 25) at 10 p.m. ET, Serch is hosting a live Kickstarter event that includes dropping some “gems” and playing some beats from the project.

Access the event and find more information on the Kickstarter campaign here.