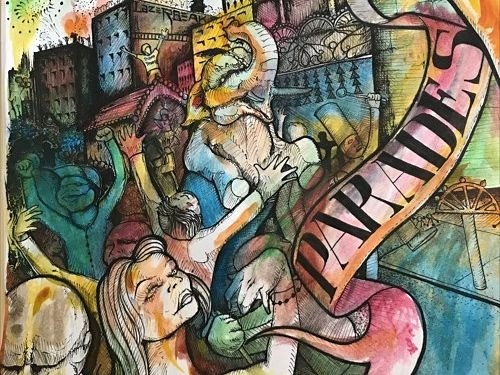 As one half of the production team behind Doomtree, Lazerbeak already has his plate full. In addition to his beatmaking duties, the Minneapolis native is also Doomtree Records’ CEO, and manages groups like Poliça, Shredders and (naturally) Doomtree.

Now, he’s adding another collaboration to his stacked resumé. Beak and veteran Chicago MC Longshot have teamed up for the Parades project, which is expected to arrive on June 8.

The Midwest duo has shared the first single from the project, “Just Dance,” an explosive organ-heavy anthem wrought with an infectious groove and Longshot’s effortless flow.

“I first met Longshot years ago when he would come through on tour with Psalm One,” Beak explains to HipHopDX. “I kicked him beat tapes from time to time for different projects and we slowly just started building up a vault of collabo tracks.

“Last year we kind of had our eureka moment, like, ‘Oh shit, this is a cohesive album!’ and now here we are.”

Physical copies of Parades can be pre-ordered from the Doomtree Webstore, while digital pre-order is available through Bandcamp. All pre-orders will receive three bonus tracks from the Parades studio sessions.