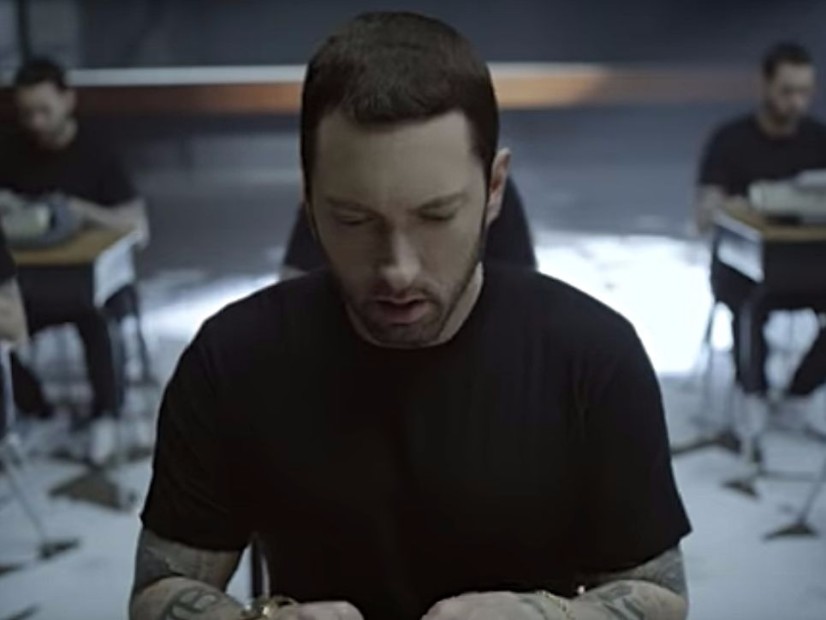 Eminem’s new video for “Walk On Water,” the lead single from Shady’s ninth studio album Revival, is now available to the masses. The Detroit rap god shared a teaser clip of the visual to Twitter on (Wednesday) December 20 before exclusively releasing it on Apple Music a few days later.

In an interview with Def Jam Recordings co-founder Rick Rubin for the Broken Records podcast, Em explained the song — which features Beyoncé — was about “not being Superman.” Throughout the track, he exposes his deep-seeded insecurities and the impossible task of trying to please everyone.

Watch the “Walk On Water” video (minus Beyoncé) below.

After teasing the video on Wednesday (December 20), Eminem has delivered the full version of the “Walk On Water” video — but only to those who subscribe to Apple Music. The song serves as the lead single to Slim Shady’s ninth studio album Revival and features a hook from Beyoncé, although she doesn’t appear in the video.

During one scene, a hologram of the late rapper Proof appears. The former D12 member and close friend of Em’s was killed in 2006.

Head to Apple Music to watch the “Walk On Water” video until it surfaces on YouTube.

(The original version of this article was published on December 20, 2017 and can be found below.)

Mr. Marshall Mathers took to Twitter on Wednesday (December 20) to share a teaser clip of his forthcoming video for “Walk On Water,” the first single from his new album Revival.

The song, which features an emotive hook from Beyoncé, yielded mixed reactions from Eminem fans and critics alike but revealed what’s been on the 45-year-old rap god’s mind — pressure.

“Why, are expectations so high?/ Is it the bar I set?/ My arms, I stretch, but I can’t reach/ A far cry from it, or it’s in my grasp, but as/ Soon as I grab, squeeze/ I lose my grip like the flying trapeze/ Into the dark, I plummet/ Now the sky’s blackening, I know the mark’s high/ Butterflies rip apart my stomach/ Knowing that no matter what bars I come with/You’re gonna hark, gripe,” he raps.

In the 32-second video clip, Eminem’s hands are seen furiously typing on a typewriter before the camera pans out and we see Em surrounded by Slim Shady clones.

“Walk On Water” debuted at #1 on the Billboard Hot 100 for the week ending November 16.

Watch the “Walk On Water” video preview above.