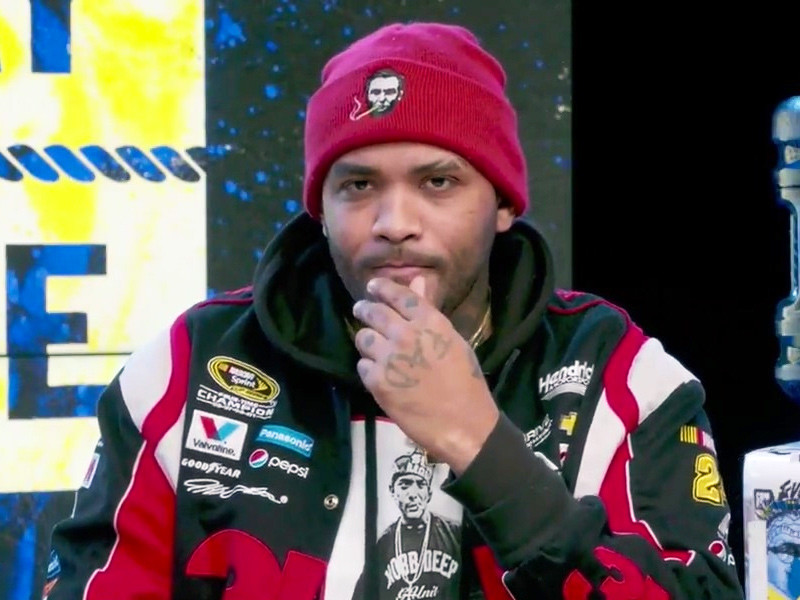 Joyner Lucas stopped by Complex’s Everyday Struggle and ended up laying out all the reasons for his issues with Logic. After retelling the story of how tension started because of their mutual appearance on Tech N9ne’s “Sriracha,” Lucas opened up even more about his issues with Logic and claimed the Def Jam artist actually stole his ideas.

“We in L.A. and shit, and I’m in the studio and Logic’s manager comes through,” Lucas explained around the 42-minute mark of the interview. “This is before I jumped out the window and said anything … Logic’s manager came through to the studio ’cause him and my manager, I guess, know each other. We playing shit from the album, whatever the case may be. He’s like, ‘Oh, what’s the name of the album?’ 508-507-2209. ‘Why you name it that?’ So, we talking ’bout it. And then I start playing my videos. Played the suicide joint. ‘Oh, this shit crazy.'”

According to Lucas, the session prompted Logic’s manager to try to set up something between the two MCs.

“So his manager’s like, ‘Yo, I’d maybe like to get you and Logic together,'” Lucas recalled. “I said, ‘Yeah, that’s cool.’ Maybe get on the road or whatever. I’m like, “Yo, that’s cool. Whatever.’ It was what it was. Political shit. Cool. Playing the game. I’m not jumping out the window. It is what it is. Couple weeks pass by, my manager following up with him. ‘Yo, what’s good? Joyner’s about to wanna go on the road. Did you make the connection with Logic so them two can you know?’ And then muthafucka’s like, ‘Logic don’t wanna meet new people.’ Logic don’t wanna so I’m alright, we were just on the same song.”

“Yeah, bro! That’s how I felt,” Lucas said. “Like, what the fuck? I just played my shit. The video, which you’ve never seen. You was so hyped about my fucking album title being a phone number. Next thing you know, Logic’s fucking 1-800 song is a phone number. Now I’m like, that’s weird. And it’s a suicide song at that! At the end of my ‘I’m Sorry’ video, I put a suicide number there.”

Lucas told the hosts that he wasn’t mad to see Logic doing a track about suicide but believed his ideas for the phone number title and topic were being bitten. It was only made worse by the existing problems had with Logic.

“I didn’t wanna jump out the window like I’m the one who came up with the suicide [song],” he continued. “Cool, you’re spreading a good ’cause my man. That’s good. That’s great. Let’s both do it. But at the same time, the Tech shit, this shit, the manage— Now, I feel like that’s what prompted me to jump out the window. And when we went into interviews, that’s what prompted me to say I think he’s corny. Horrible timing ’cause after I did that interview, he did the VMAs. Then they decide to drop the interview after the VMAs and make me look like Joyner Lucas thinks Logic is corny for what he’s doing at the VMAs. I thought that was great. I thought that performance was dope. It was just bad timing. Shit just made me look bad. But behind closed doors, that’s everything that happened.”

After Lucas finished airing out what went down, Joe Budden pushed back and reference A Tribe Called Quest’s “industry rule #4080, record company people are shady” lyric. Budden sought to provide career advice, telling Lucas the skilled lyricist made a mistake by ever letting Logic’s manager into the studio.