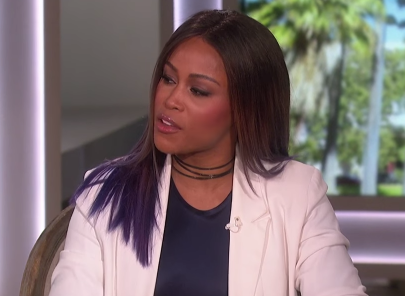 Los Angeles, CA – Eve was once known as the “illest vicious pitbull in a skirt.” Now, the Philly native will be known to daytime television watchers everywhere as the new face of the Emmy-nominated show, The Talk.

The Hollywood Reporter confirmed that Eve would officially take over for Aisha Tyler’s vacated seat at the table after the 38-year-old Grammy Award-winner had been guest-starring for the past couple of weeks. She’ll add her commentary to the existing cast consisting of Julie Chen, Sara Gilbert, Sharon Osbourne and Sheryl Underwood. According to THR, she’s repped by ICM Partners, Untitled and Barnes Morris.

“We are thrilled to welcome Eve to the table as she brings a fun and fresh perspective to our already diverse panel,” Angelica McDaniel, the executive vice president of daytime programs at CBS Entertainment, said in a statement. “The great success of The Talk is due to the undeniable chemistry and bond of friendship between the hosts. Eve is an accomplished and dynamic performer, musician, wife and stepmother who fits in seamlessly, while also adding a new layer to the show as we continue to evolve season to season.”

Speaking of motherhood, Eve recently revealed on The Talk that she and Maximillion Cooper, her husband of three years, were currently in the process of having kids.

“One question I get is … ‘How old are you?’ and also, ‘You don’t have any kids?’ It annoys me,” she relayed to her castmates before outing a male acquaintance of her husband’s who asked her, “When are you gonna give my friend some kids?”

“Let me just say, we are trying for anybody who’s asking, but it’s up to God. Just stop asking questions,” she concluded.

Dating back to 1998, Eve got her big break within the DMX-led Ruff Ryders squad. She later became the third female Hip Hop artist — following Lauryn Hill and Foxy Brown — to have an album debut atop the Billboard 200 thanks to the double platinum-selling Let There Be Eve…Ruff Ryders’ First Lady.

Throughout the next decade, she put up some more plaques and saw her acting career take off, most notably, earning her own UPN show in the self-titled Eve (which ran for three seasons) and co-starring in Ice Cube’s acclaimed Barbershop film trilogy.

During the press run for the last film, The Next Cut, Eve exclusively told HipHopDX that even at 38-years-old, rap fans shouldn’t exactly count her out from releasing music but the timing has to be impeccable.

“I want to make sure this music means something,” she explained. “I definitely don’t just want to making a song just to make a song. But I want to showcase what I am now and where am I in my life now. I’m not trying to relive any moments. I appreciate all those moments and I wouldn’t be here without them but you know, I need to take [those moments] and bridge them to where I am now. So, yeah, that will be the challenge.”