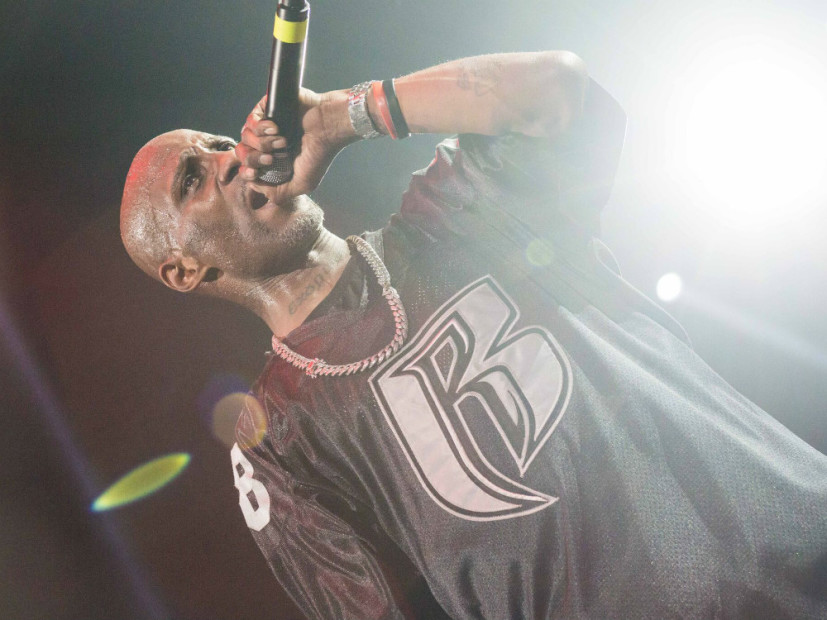 The whole “rap-music-was-better-in-the-’90s” theory is a trite argument at this point in time. Yet when you factor in the collective discography of an outfit like the Ruff Ryders, it doesn’t exactly make a convincing case for the new generation getting a pass for simply being new. The entire phenomenon that was and still is DMX. Classic rap hits like “Blow Ya Mind,” “Down Bottom” and “We Gonna Make It” will forever have a place in any streaming entity and open setting. While trends come and go all the same as life happens to throw curveballs (see Eve’s unofficial retirement for example), credible music will forever have a place in the people’s hearts, for they can remember exactly what they were doing at the time when it was prominent in the culture.

Which also justifies the need for a reunion once the dust settles and fans begin to take on this thing called adulthood.

Thousands of fans occupied the Brooklyn sanctuary known as Barclays Center Friday (April 21) to witness the first time the original Ruff Ryders have shared the same bill in years. While glitches in The Matrix were to be expected, it was the succession of the chain of events that led to the NYC reunion to have a severely anticlimactic finish.

It’s an unspoken ritual that no rap show begins on time and evidenced by their slow start, the powers that be weren’t hell bent on breaking tradition. Eager fans hungry for that nostalgia satiation rushed to their seats the moment Barclays opened its floodgates and were treated to unsolicited yet energetic performances from the newest Double R members in Quadir Lateef, Drew James and Lil Waah (son of Ruff Ryders co-founder Joaquin “Waah” Dean). Meanwhile, backstage, a horde of publicists braved off literal hunger as they patiently waited for a press blitz from the legendary artists amid a power-tripping coordinator who increasingly cut off square footage access to the area as the hours ticked by. Rumblings of DMX being “around the corner” permeated conversations until it morphed until an urban myth. But shortly after the aforementioned promising newbies made their rounds in the press space, the label’s unyielding torchbearer, Swizz Beatz himself appeared to not only conduct interviews and take photos with all who asked, but also spoke on the artists’ behalf, proclaiming nerves got the best of them and they were overly focused on giving the people the best show they possibly could.

The MONSTA @therealswizzz spilling the beans on his all-time favorite beat. ??? As for his worst…? #RuffRyders #SwizzBeatz

And regardless of any technical difficulties and lapses in the changeover of sets, the artists didn’t shortchange the BK audience, who entrusted them with getting their weekend off to a palatable start. Since the early ’00s, former Ruff Ryder baby boy Drag-On has faded from the public eye to focus on his Hood Environment imprint but he still managed to sound CD quality when floating through his fan favorites like “Down Bottom” and “Spit These Bars.” Much to do has been made about Eve marrying a billionaire (Gumball 3000 Maximillion Cooper is very rich, but “billionaire” was sensationalism for the blogs) and living life in the clouds, but the self-proclaimed “Illest Pitbull In The Skirt” will forever have the Philly streets in her blood and she put on quite the show and even illuminated the scene with backup dancers who brought back that ’90s Hip Hop flavor in the process. 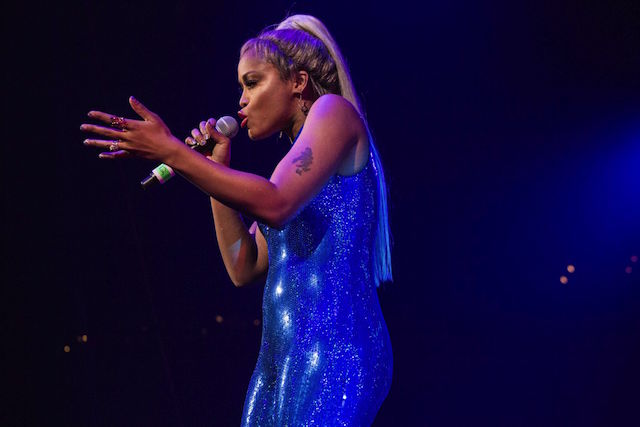 Padding the anticipation for DMX’s grand return was Swizz and the entire LOX, who had no qualms in bringing out the special guests as previously advertised. An underrated performer in his own right, Swizz amped up the crowd with some of his production classics such as T.I.’s “Swing Your Rag,” Memphis Bleek’s “Like That,” and Jay Z’s “Jigga My Nigga” (yes, there was a collected holding off the breath amongst the populous that Hov would show — no dice, though) before extending an invitation to his Bronx brethren’s Fat Joe, Remy Ma and French Montana. On instinct, the crowd knew “Lean Back” and “All The Way Up” were on the way and Remy BX even spit a few a capella bars that could be perceived as aimed at you-know-who. Not to be outdone, the Coke Boy ponied up his signature hits in “Pop That” and “Ain’t Worried About Nothin'” before reminding the audience he had a new baby on his hands with the infectious record “Unforgettable.”

And no Swizz Beatz party is complete without a “Drink n my 2 Step,” which protege Cassidy can handle so well. The Philly MC used his guest spot to remind the crowd that his bars are still prison block hard and didn’t see any qualms in making headlines by throwing shots and Lil Yachty, Lil Uzi Vert and Young M.A. He also announced he and Swizz were cooking up an album titled The Crook and The Thief but the former statement resonated with the crowd much deeper. 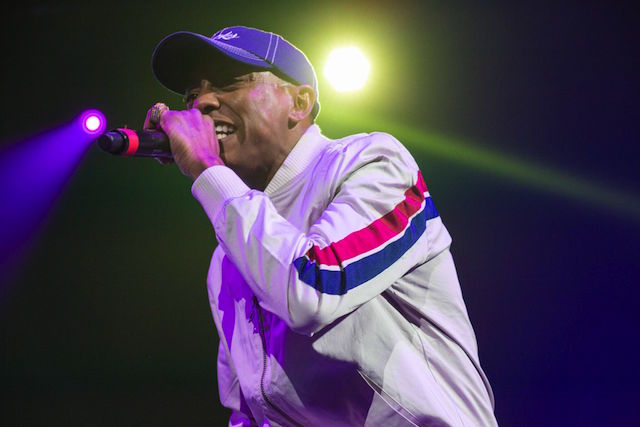 Fresh off their nationwide tour and Roc Nation christening, The LOX looked beyond confident as they ran through unforgettable numbers like “Fuck You,” “All About The Benjamins” and “2 Guns Up”. The Yonkers trio also didn’t forget they were in the birthplace of Biggie Smalls (among countless other rap staples) and gave the stage to the hometown heroes of yesterday in M.O.P. and Junior Mafia (sans Lil Kim) as well as Uncle Murda, who obviously isn’t letting off the throttle anytime soon. There was also a brief cameo of Akon who jumped the gun on his cue during his classic duet with Styles P, “Locked Up.”

With all the boxes checked save for the main event, fans booed onlookers who took their sweet time in getting off the stage as DMX perceivably mentally prepared himself in the shadows. After more than 20 minutes removed from The LOX’s performance, the emotional montage of the Dark Man X’s glory days graced the stadium’s monitors as the opening chimes of the It’s Dark and Hell Is Hot opening intro crept in. The Dog burst on the stage a tad bit early but his enthusiasm was respectable all the same. It didn’t take long for the beat to flip into the classic album cut, “Some X Shit” but it didn’t move the crowd whatsoever. After several hours of Ruff Ryders giving their all into the mic, X was out there working with a busted device. An impromptu switcharoo didn’t help matters and you could hear casual conversations throughout the Barclays despite the blaring horns of the “Ruff Ryders’ Anthem,” one of the best rap songs to ever grace the soundwaves. 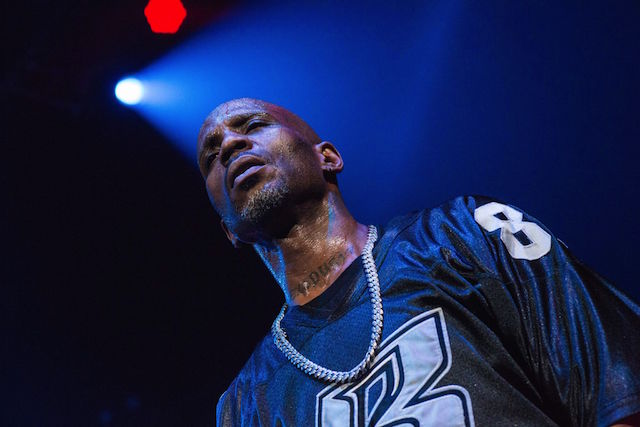 An apparently woozy X spent time rambling about his faith, felonies and how the loads of “bitches he fucked” couldn’t compare to rocking an arena full of people who loved him, but it would have been great had they heard him all the same. Mid-performance, the concertgoers begin to remove themselves from the premises with the integral knowledge they could beat the rush and wouldn’t be afflicted with FOMO.

Such a legacy deserves better.