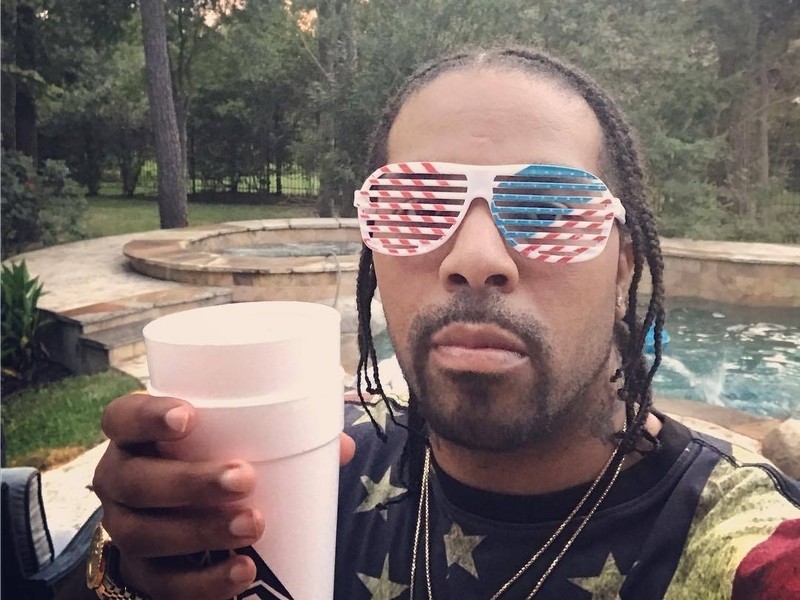 The 2000s saw an explosion in Texas Hip Hop. The influence of the Lone Star State could be heard on every radio and seen on every TV across the country. One of the artists at the forefront of that movement is Houston’s freestyle king, Lil Flip.

With over 23 million records sold, the Cloverland G helped to firmly plant H-Town’s flag in Hip Hop. Lil Flip recently stopped by the DXHQ to chat with the #DXLive team about Houston’s culture being taken, his mentor DJ Screw, how he’s making a difference in his hometown and five new pieces of music he’s releasing over the next five months.

“In Houston, we don’t have the luxury of waking up like L.A. or New York and get up and walk to Def Jam,” said Flip when asked why Houston hasn’t maintained a prominent spot in Hip Hop. “So our blueprint was J. Prince and Rap-A-Lot, being independent and getting all they records spinned.

“I used to be in the club with all them — Devin [The Dude], Facemob, Tela — and just learning. A lot of people was doing different things. Paul [Wall] doing the grills, Slim [Thug] doing real estate. everybody branched out. I got boxers and fighters. We doing other things that’s outside of rap but everybody’s doing music. It’s just about working but at the same time, a lot of people stole our H-Town culture. They walking around with double cups. some people drinking NyQuil. So even though we don’t dominate the radio and TV like we used to, if you see somebody with a double cup or a grill in they mouth and diamond teeth, We started that shit.”

With this in mind, DX asked whether or not fans have forgotten his legacy since he has been out of the spotlight.

“I don’t think they forgot,” he said. “You got some people that are your core fans and then you got some people who feel like if you not on TV all day or [get] radio play that you’re not doing nothing. But, you know, I learned from the best — people like J. Prince,  Master P’s and Tony Draper. So we use music to promote our other things.

“Behind the scenes, I got MMA fighters. I got boxers. I got a tattoo shop in San Antonio [called] Timebomb. I got a jewelry store in Austin called TJ’s Jewelry. [I’ve got] app deals [and] liquor deals. I keep my hands in so much stuff. This time, I’ma just keep the music coming. Throughout the course of the last four to five years though, I probably dropped about 40-50 mixtapes. I stay doing mixtapes [but] I’ll do ‘em different.

“You know how when some people drop projects, they promote them the same way? I feel like if you use the same people to promote every project, you gonna reach the same people. Some projects, I’ll do an exclusive with a website. Some I’ll put $10k into, some I’ll put $20k into, some I’ll just put them out for one day and take them down. I just do weird stuff so I can reach people who don’t get music the regular way.”

During the height of Flip’s career, his beef with fellow Southern rap legend T.I. was one of the most storied and longest feuds in rap. Flip said of the beef, “It actually just help me remove some people around me that I didn’t really need around me.”

Of course, some of Flip’s greatest memories are those of his late mentor, DJ Screw. During the H-Town legend’s chat with HipHopDX, he recalled some of his favorite stories about the pioneering DJ.

“The fondest memories, it [was] always spontaneous with Screw,” Flip said.. “The days you was supposed to do yo’ Screw tape, he’d be like, ‘Yeah we ‘gon do it tonight’ and you don’t end up doing it. You end up doing it on a accidental night. Something might happen and you don’t do it that night, but you might bump into him later. We had this lil spot in Houston called Cornbreads where we’d go shoot pool after hours. [I’d] bump into him up there and he’d be like, ‘Hey man you ready? Let’s go do that tape now.’

“And I was going to school. I was still in high school going to Screw’s house, shooting pool, freestyling, playing dominos and all that then leaving Screw’s house at five in the morning and going right to school. My favorite memory besides him shooting pool, I went with him to a car show and he had probably had 10,000-15,000 Screw tapes. I sat with him at the booth [and] he sold every tape. At the end of the day, we was counting and it was like 50 grand. I was like, ‘Damn, we sat at the booth for two hours and this guy got 50 grand.’ So that let me know … you know how some artists are when they perform, they wanna leave? They don’t wanna be at the booth; they don’t wanna take pictures with the fans. [But] shit if I’m finna make muthafuckin’ 50 grand bro, guess what? I’m finna sit at this booth, man.

In his hometown of Houston, Flip has dedicated his time and platform to help the kids of his city with his Arts Over Drugs initiative. Helping his city doesn’t end with the children. Flip has also been visible in the city’s recovery efforts after Hurricane Harvey:

“I took money from my marketing budget and concerts and went out there and gave away stuff,” he revealed. “A lot of these big corporations, they taking money and that money not going to the people, so I just felt it was my duty to get out there and do my part. Shoutout to the other artists that got out there, actors, J.J. Watt and people who raised money to help. We praying for Puerto Rico and the people that were affected by the other hurricanes.”

In the middle of all of his businesses and helping Houston, Lil Flip is gearing up to release four EPs and a double album over the next five months.

“What we doing [is] releasing the music in a different form,” Flip said. “You know people got short attention spans, so I’m dropping four EPs before I drop the full album and it’s gon’ spell out the word ‘King’. So the K EP will be this month. Next month, we’ll drop the I. January, we’ll drop the N, February [is] the G and then the full album, King Life, which is my first double album [since I Need Mine]. I ain’t dropped a double album in like 10 years. King Life, the double album, [drops] March 2. You gotta change with the times and still keep your core.”

You can grab Lil Flip’s K EP right now on every streaming service. For more exclusive interviews like this be sure to tune into #DXLive every Thursday.