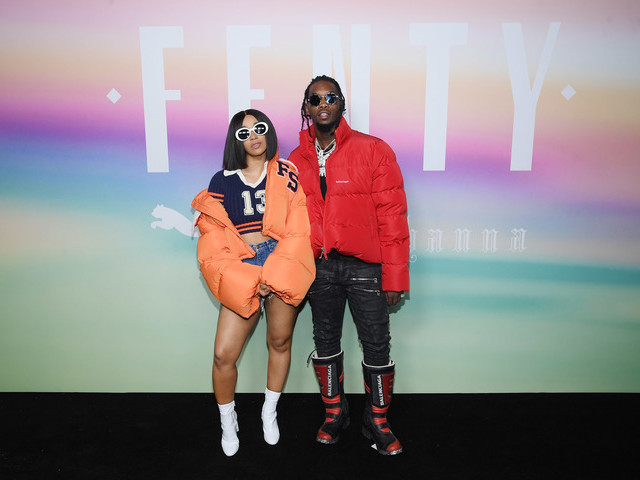 Offset & Cardi B Are Officially Engaged

Philadelphia, PA – Love is in the damn air! Offset got down on bended knee in front of nearly 19,000 concert goers at Philly’s Powerhouse show Friday (October 27) night and proposed to his rap star girlfriend Cardi B.

The crowd went nuts once they realized what was happening and understandably, the 25-year-old New York native could barely contain her excitement either as she accepted her man’s proposal in holy matrimony with zero hesitation.

Better view of Offset's proposal to Cardi B ? pic.twitter.com/yihdq9L5ug

It was just last week when Hip Hop’s new favorite couple had everyone shook after the “Bodak Yellow” recording artist posted a selfie to Instagram saying she was single. For a very short period of time it was suspected she was getting back with her ex Tommy who was recently let out of prison. That conspiracy theory was quickly put to rest after Cardi shared another social media post apologizing to Offset and admitting it was over a beloved blanket of hers that she thought he stole.

It appears that now all is well and there should be a wedding soon, joining the ranks of Hip Hop marriage royalty who have enjoyed successful marriages, such as Beyoncé and JAY-Z, Remy Ma and Papoose, and the recently married couple, Gucci Mane and Keyshia Ka’oir.

Cardi B and Offset have been dating since the beginning of this year, making various appearances together and also making music together. Offset is featured on Cardi’s Gangsta Bitch Vol. 1 single “Lick” and more recently, they appear together on that highly anticipated track featuring Nicki Minaj, “Motor Sport” with his Migos brethren which was released Thursday (October 26). During the course of their courtship, the couple has been very open about their relationship (in and outside the bedroom) and it was also rumored that they were secretly engaged.

The Love & Hip Hop: New York star gloated about her engagement and gorgeous, diamond engagement ring with an Instagram post dedicated to Offset.

“I can’t wait to spend FOREVAAAA with you .Lets make a lot shmoney and love together,” she captioned.

Jesus Christ I’m so emotional, @offsetyrn I loveee you so much .Thank you for seeing the potential in me since you met me .For giving me advice molding me and loving me .Your such a amazing man to me your family ,friends ,kids and you are extremely talented.I can’t wait to spend FOREVAAAA with you .Lets make a lot shmoney and love together ❤️ ❤️

HipHopDX would like to congratulate Cardi B and Offset on their engagement!