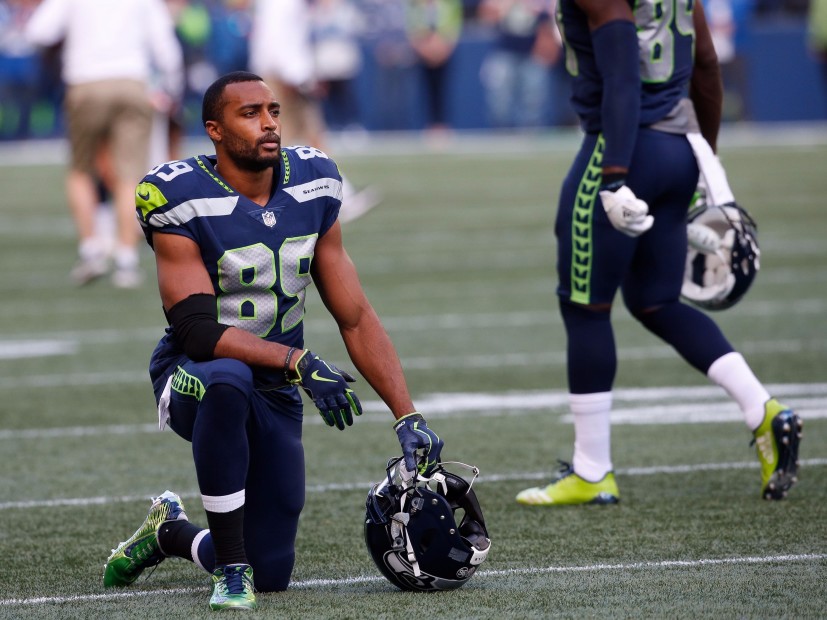 Social media erupted over the weekend when Vice President Mike Pence walked out of an Indianapolis Colts-San Francisco 49ers game after a few players took a knee during the National Anthem. Donald Trump took to Twitter on Sunday (October 8) to announce it was his decision to have Pence leave if “any players kneeled, disrespecting our country.”

I asked @VP Pence to leave stadium if any players kneeled, disrespecting our country. I am proud of him and @SecondLady Karen.

Pence also tweeted on Sunday and clarified his actions, writing, “I left today’s Colts game because @POTUS and I will not dignify any event that disrespects our soldiers, our Flag or our National Anthem.”

The gesture, which was popularized by former San Francisco 49er Colin Kaepernick after he kneeled during the National Anthem in protest, has taken on a life of its own. Countless athletes and everyday citizens have taken part in the peaceful protest in an effort to bring awareness to racial injustice and the staggering number of black Americans being killed at the hands of police. The intention behind the gesture has nothing to do with disrespecting the United States’ flag.

Kaepernick found himself the target of fake news over the weekend as well. CBS Sports ran a report claiming Kaepernick would stand for the National Anthem if he was offered another job with the NFL.

After his alleged comments went viral, Kaepernick used a quote from Winston S. Churchill to address the misinformation.

“A lie gets halfway around the world before the truth has a chance to get its pants on,” he wrote.

A lie gets halfway around the world before the truth has a chance to get its pants on.

CBS was forced to walk back its original report after the writer responsible for the piece, Jason La Canfora, admitted he and Kap never discussed the issue.

Standing for Anthem wasn't something that I spoke to Colin about sat. I relayed what had been reported about him standing in the future…

Reports about @Kaepernick7 standing for anthem had not been refuted. However, I cant say if they are true or not. Colin and I didn't discuss

Of course, several members of the Hip Hop community headed to social media to voice their thoughts on the Kap fiasco and Pence’s shenanigans, further evidence of Hip Hop’s storied history of rebelling against the status quo.

Killer Mike, Open Mike Eagle, El-P, and Evidence, among others chimed in, while The Breakfast Club deemed him “Donkey of the Day.”

I wonder how he feels about the constitution. ??‍♂️The document that contains the principles this republic is founded on. The 1st being #FreeSpeech. Free speech is what protects this and any protest. The constitution that guards against Tyranny like the state abusing and denying citizens full rights. U know the stuff that prompted the kneel. The kneel is to bring awareness to the public that officers of the law are playing Judge, Jury and executioner therefore denying Americans Citizens their constitutional rights becuz they are a racial minority. I wonder if he knows he and the soldiers I respect and value swear to uphold that constitution and not simply be propaganda agents for the state. He loves religion to much to hold public office in my opinion and he shows that he cares nothing for our republic by not honoring the constitutional rights of its citizens. I'm glad he left that event because he cheapened it with his presence. God speed on our next election. I hope we send his religious nut ass back home to relish in his false understanding of what this country is and we never see him on a national stage again. ?

Pence went to and left the game only to silence a group of citizens. No addressing of their concerns allowed.

im for anything that makes mike pence leave places.

and fwiw the idea that pence being at an event "dignified" said event seems… off. dude been in the white house this whole time ??‍♂️

Been off twitter all day, did Mike Pence come out of the closet ?