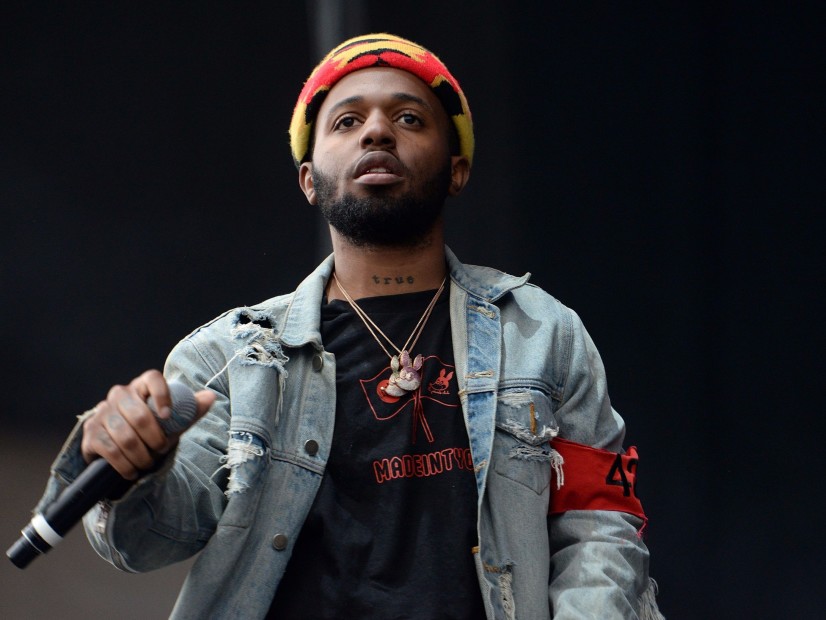 Los Angeles, CA – MadeinTYO (pronounced Made In Tokyo) has been slightly enigmatic since his breakout single, “Uber Everywhere,” went viral in 2016, a track from his 2015 You Are Forgiven mixtape. Following a remix of “Uber Everywhere” featuring Travis Scott, TYO’s status in the rap community began to grow, but did little to shed light on who TYO actually was.

After an August 2016 re-release, You Are Forgiven peaked at #122 on the Billboard 200 and details about the 25-year-old Los Angeles transplant slowly started to emerge.

Born Malcolm Jamaal Davis, the former military brat took his name from his stint living in Japan as a teenager. He is the brother of rapper 24hrs, and was highly influenced by artists like Gucci Mane, M.I.A. and Pharrell Williams.

As his opportunities continued to unfold, TYO had the chance to work with some of his musical heroes, including Pharrell. In March, TYO posted a since-deleted Instagram photo of him working with the “Happy” singer in the studio with a caption that read, “Working on my album. Thank you to all my fans, I really appreciate you. Tour starts next week, see you guys soon!”

TYO admits he was relieved the N.E.R.D. mastermind exceeded his expectations when he finally met Pharrell for the first time.

“Pharrell is dope and people know that,” TYO tells HipHopDX. “So it’s like, meeting him, he didn’t do bad. It was definitely one of those, ‘Thank god you’re not the opposite of what I thought you were’ moments. Like Pharrell is definitely a real one. We had good conversation.”

He adds, “You put yourself out there and to actually get that love back is, I think, the ultimate goal at the end of the day.”

Now, as TYO puts the finishing touch on his debut album (scheduled for an early 2018 release), he has other goals in mind. He’s a new father to a seven-month-old son and engaged to artist Anhia Santana (otherwise known as Distortedd), two things that have made him want to be the best version of himself.

“When I’m out and I get into a hotel or something, nine times out of 10, the hotel will have a healthy salad or something close,” he explains. “I’m losing weight and I’m working. I’m actually doing something.”

He says having a child has really changed his perspective on life and longevity, inspiring him to shape up.

“What about when he hasn’t started walking yet?” he says. “What about when he starts running and I have to chase him or something like that? I’m like, ‘Yo, I’ve got to be prepared. I can’t be out here, you know, just useless. I’ve got to be able to move.’ Everybody needs to be around for a long time for their family, so whatever challenge they have, or whatever God’s purpose is for you, I feel like everybody has to fulfill that before they’re gone.”

TYO just released his fourth official project — the True’s World EP — earlier this month. For now, TYO is simply enjoying the ride and ready for whatever comes next.

“Meeting some of the people you look up to, and them supporting you and accepting you in what you do, sometimes it feels unreal,” he says. “It used to be mind-blowing, and then it got to the point where it was like, there are so many good things happening, it’s like you’re numb. But this is really happening.”