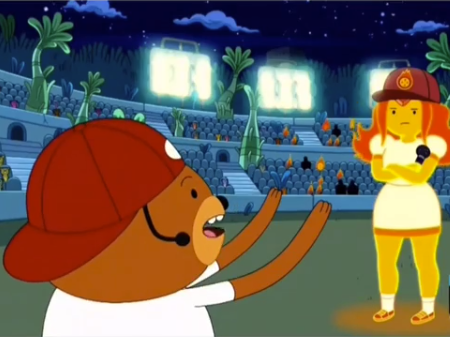 The episode, titled “Son of Rap Bear,” was part of four new back-to-back episodes that premiered this past weekend. They served as the first new episodes of Adventure Time to air since mid-July.

The episode begins with Son of Rap Bear – voiced by Dumbfoundead – beating a gingerbread man, who is played by Open Mike Eagle, in a rap battle at an open mic night. Son of Rap Bear then goes head-to-head against Flame Princess, the sovereign of one of the show’s many kingdoms. When the battle comes around, Son of Rap Bear takes a slew of shots at Flame Princess, leaving the audience convinced he will walk away as the winner. Flame Princess begins her round with some soft verbal jabs, only to later choke in front of the crowd. However, after continuous taunts from the audience, she loses her cool and lets off a string of lethal shots that win over those in attendance.

“I thought I was the God of rap, rivaled by none/ But I’m more like bubble wrap ‘cause she squashed me for fun,” Son of Rap Bear spits after being handed a decisive L.

Dumbfoundead, Open Mike Eagle and Rekstizzy aren’t the only rappers to have appeared on Adventure Time. In 2010, Biz Markie lent his vocals as the voice of Snorlock, while in 2013 and 2016, Donald Glover – also known musically as Childish Gambino – played the role of Marshall Lee for two episodes.

Following its premiere on Sunday, Dumbfoundead posted a number of clips from the episode to his Instagram. The former battle rapper has been busy with TV and film recently, including with a recurring role in Season 3 of the 50 Cent executive-produced show Power, and parts in the Bad Rap documentary and Bodied, the battle rap satire film produced by Eminem that premiered at the Toronto International Film Festival earlier in September.

Here are the clips of me as 'SON OF RAP BEAR' on Adventure Time last night! One of the coolest things I've ever done! The first battle is against my real life friend @artrapmike as GINGERBREAD MAN and the last clip is of my best friend @rekstizzy who is the voice of my dad RAP BEAR so cool I got to do this with my friends! Go watch the full episode cause it's SO GOOD! Special thanks to @instantdoodles at Cartoon Network!

Open Mike Eagle – who just released his Brick Body Kids Still Daydream project last week – also took to Instagram before and after the episode’s premiere, as did Queens, New York rapper Rekstizzy, who appeared alongside Dumbfoundead in the Bad Rap documentary and on Power. He’s also previously collaborated with Lil Fame of M.O.P. for the track “Come At Me Bro.”

my rap voice will be in an episode of adventure time tonight. every time I think of this i do a little dance. every time. 730pm eastern on @cartoonnetworkofficial

one of my early dream was to die on tv and it happen on @power_starz when I got shot in back of head alongside my best friend @dumbfoundead. and tonight another dream come true where I could lend my voice to one of my all time favorite shows #adventuretime…. would've been happy to just contribute a sound for wind (wooshpft) or a small animal scurrying away into a brush (pitter patter, pitter patter) but was blessed to be part of a v emotional and dramatical scene with heros @jessicadicicco and @jeremyshada .. plz check out this and all other four episode tonight, forever grateful @instantdoodles, shout out the god @blogsbie

woah it me talking to finn and flame princess bout my failures ~ but my new ep #lilypadvol2 drops this week (9/21) plz follow on soundcloud/spotify ?