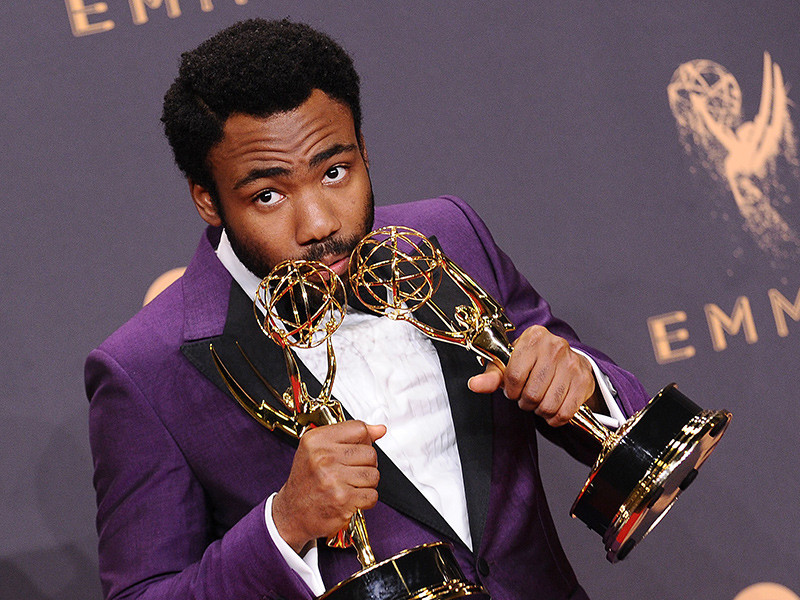 The ceremony, presented by television show host Stephen Colbert, saw a number of luminaries from the world of television go down in the history books.

“I want to thank Trump for making black people number one on the most oppressed list,” Glover said while accepting his second award of the night. “He’s probably the only reason I’m up here.”

Chance the Rapper made a surprise appearance during Stephen Colbert’s politically tinged opening number. The Chicago artist continued Colbert’s theme by rapping about police brutality and the importance of protesting when injustices are present.

“I love television, it’s a pleasant distraction/ But just imagine taking action/ I like Brooklyn Nine-Nine, in fact I’m addicted/ But where’s the cop show where one gets convicted?” Chance raps in the video below.

Elsewhere, Lena Waithe – alongside her writing partner Aziz Ansari – made history by becoming the first black woman to win in the category of Outstanding Writing for a Comedy Series. The pair took home the award for their writing on “Thanksgiving,” an episode from Netflix’s Master of None, about a black woman coming out to her family as a lesbian.

Sterling K. Brown of NBC’s This Is Us won Outstanding Lead Actor in a Drama Series, and, by doing so, became the first black actor to win in the category since 1998.

While there were lots of reasons to celebrate, the ceremony was marred by some controversy.

During the “In Memoriam” segment (the ceremony’s annual tradition of honoring the lives of those industry luminaries who passed away during the past year), there were a few notable omissions that caused fans and commentators to take issue via social media. Among those who were absent from the segment were comedian and civil rights activist Dick Gregory, comedian Charlie Murphy, actress Erin Moran, Emmy-nominated musician Al Jarreau, The Sopranos star Frank Vincent, and acting legend Harry Dean Stanton. While the latter two only passed away during the seven days leading up to the ceremony, the omission of the others has left a sour taste in the mouths of many.

Thinking of my brothers Dick Gregory + Charlie Murphy. I'll never forget you. I miss you both. #Emmys pic.twitter.com/Ot0nfxvjMO