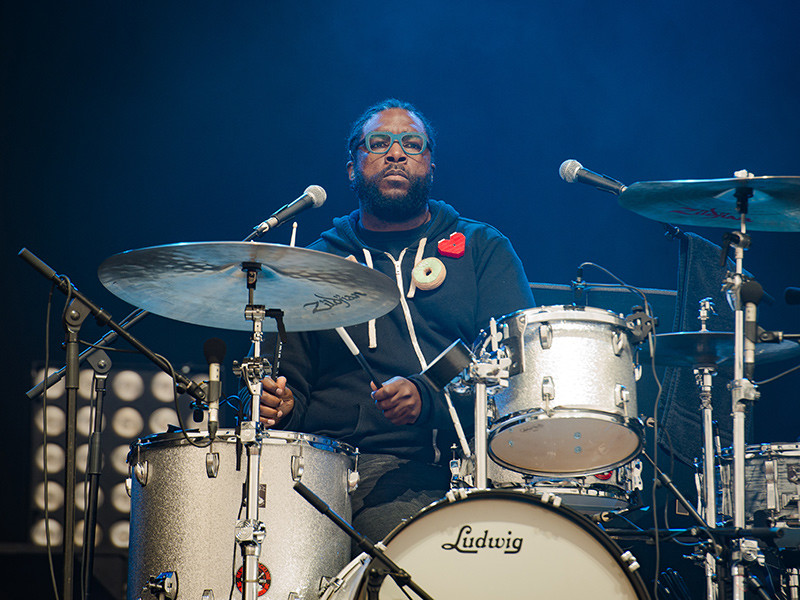 West Hollywood, CA – It’s not every day you get to have lunch next to Questlove.

On Monday (August 21), HipHopDX had the pleasure of attending an exclusive lunch with The Roots musician as he promoted the group’s song “It Ain’t Fair,” which is featured in the new film Detroit. As Quest made his rounds to each of the three tables at the A.O.C. wine bar in West Hollywood, California, he admitted this was his first time doing a press junket quite like this.

Last October, Questlove officially announced the 17th album from The Roots was in the works.  In June, Black Thought revealed the group wasn’t rushing the process. When asked if The Roots were still working on their official follow-up to 2014’s … And Then You Shoot Your Cousin, Quest answered, “Yes, we are.” He also referenced the loss of the group’s longtime manager, Richard Nichols, who passed away in 2014.

“It’s still tentatively titled End Game,” he revealed. “The difference between this record and [the ones] that came before it was our longtime collaborator, who’s our manager and producer, is no longer with us. Usually, in that situation, [Nichols has] always been the centerpiece, the referee, between all the guys. So, this will be the first time we had to grow up and resolve our own arguments. But the one thing he was talented at was telling us to stop.”

263 songs have been recorded for End Game but only 14 will make the cut.

Turning to a more sensitive subject, Quest has always used his voice to speak up on social issues. With the incidents that took place in Charlottesville, Virginia still fresh in everybody’s minds, the skilled drummer revealed his secret to remaining calm and composed in these troubled times.

“I’m going to sound like the guy that I used to make fun of 10 years ago,” he said. “When someone first introduced the ‘M’ word to me, which was meditation, I was like, ‘Alright. Weirdo. Let me get out of here.’ But I’m also a person with literally 19 jobs. I don’t even put that lightly. It’s literally 19 jobs. I always describe the human brain as — it’s like having a bunch of windows open on your Macbook, or whatever device you use on the Internet. The one thing we hate the most is when that rainbow wheel comes up and you start freezing. And you got to basically refresh and recharge. In order for me to function in everyday society, I have to spend — the first thing I do when I wake up, I go to sit in silence and breathe. And it’s hard to do. Especially now, when I’m always checking my updates to make sure that the world is actually still here. Like, ‘Oh, what adventures — are we going to have a nuclear war today?’ That’s the times we live in now. So it’s hard to live in silence. And concentrate.”

Quest’s advice then turned into a quick sneak peek of his upcoming book.

“Actually, my fourth book deals a lot with creativity and silence because I feel like the one element that we don’t utilize that’s necessary for creativity is silence and boredom,” he stated. “Because now we can just entertain ourselves at the click of a button. The problem with that, with always stimulating your mind and your brain, is that there’s no downtime. Some of the best people we had in life had silence and thoughts and boredom to create things. And so, my book editor was like, ‘Put that in 20,000-word form.’ [laughs]. It comes out in May.”

The lunch carried on with good conversation surrounding how heavy Detroit was and finished off on the topic of Quest’s Prince 101 course at NYU. When asked about his thoughts on Prince being honored with a new shade of the color purple, he responded with a chuckle.