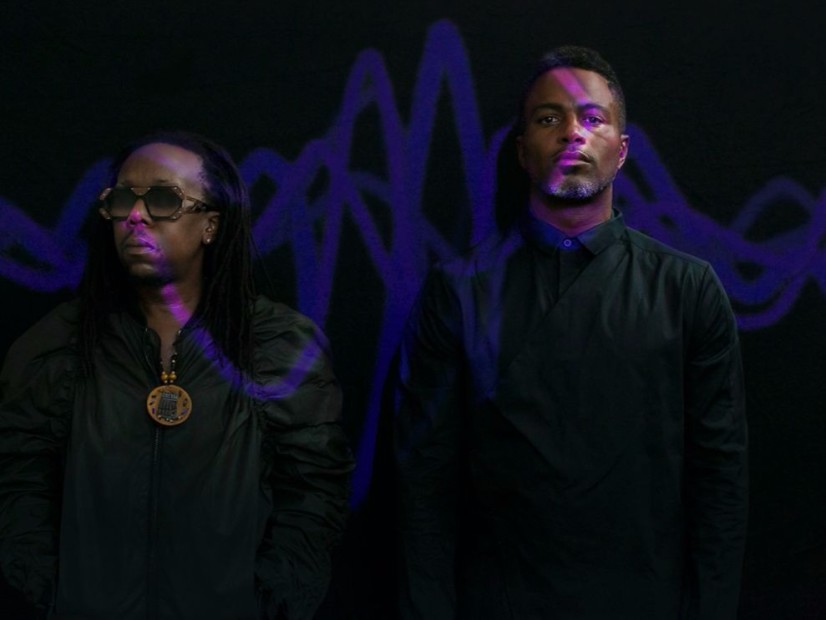 Shabazz Palaces’ experimental Hip Hop is a portal into the minds of the two artists behind the project — Ishmael “Butterfly” Butler and Tendai “Baba” Maraire. Vibrant, eclectic and slightly unpredictable, it takes the listener on a wild ride through otherworldly sonic adventures, most recently evident on the duo’s two new albums — Quazarz: Born On A Gangster Star and Quazarz Vs. The Jealous Machines.

The double release (July 21 via Sub Pop Records) brings their full-length studio album count to four, which is a feat in itself. Before establishing Shabazz Palaces, Butler was in an admittedly strange place, and wasn’t really trying to be a musician at that time. In fact, when he initially met Maraire, he told him he didn’t make music at all.

But his musical narrative continued. After the two were introduced, Butler eventually started coming out of his self-imposed shell and had the opportunity to blow Maraire’s mind one day.

“Me and him were friends,” Butler says. “He did music and I did music, but I didn’t tell him I did music at the time. He would always say, ‘Why you ain’t doing music? You gotta keep doin’ music.’ We just hung out, but he had never been to my house, so he had never saw my studio. Then when we got to be better friends and he kept telling me, so one day I was kind of annoyed, and I was like, ‘Bro I make beats all the time. You don’t have to ask me no more [laughs].’

“Then the conversation went to like, ‘Wait, you make music and you’re not putting it out?,'” he continues. “He was like, ‘It’s different now, you got the internet’ and this and that. I said, ‘I know, but I don’t really fuck with all of that. I don’t like the way it’s going with that.’ We discussed that for a while, and I finally made the records, pressed up the records.”

Interestingly enough, before they released their debut self-titled EP in 2009, Butler was hesitant to reveal he was the MC from Digable Planets, and Maraire — son of the late Zimbabwe musician and mbira master Dumisani Maraire — agreed to keep the project more of a mystery. Butler didn’t want people to have any preconceived notions about what they thought “music from Butterfly of Digable Planets” should sound like and wanted them to gravitate to it organically.

“I said, ‘Look, I’m going to put these out and not really say my name,’” Butler says. “He kind of raised his eyebrow to it, but he accepted it. Then when it started to catch on, and everything like that, we planned on doing shows and shit.”

With Butler busy doing Digable Planet shows and Maraire involved in a plethora of artistic endeavors, including The Chimurenga Renaissance and an art exhibition with the Seattle Museum of Art, finding the time to work together is challenging at times, but somehow they pull it off. Collaborating with Thundercat and Flying Lotus [Stephen Bruner and Steven Ellison], Maraire is still in awe of the people he gets to work with on a regular basis.

“It’s like looking at people that are as like-minded as you are,” Maraire says. “A lot of the times, I can’t believe they would even say yes. You don’t think Julian Casablancas [of The Strokes] knows who you are. I’m not thinking that. I think a lot of the time if someone reaches out to us, that means they have a mutual respect for us. Sometimes it’s just talking on the road and we say we’re going to do something, then it ends up two years later and we do it. There are so many different variations to it. There’s also those times when you hit the people and they never hit you back, and it’s not because they don’t want to do it, they’re just busy. Obviously with Steve and Steve, those are our dudes.”

For now, Shabazz Palaces is in promo mode in support of the Quazarz projects. Quazarz Vs. The Jealous Machines, which Butler calls the “monozygotic twin” of Quazarz: Born On A Gangster Star, takes some brain power to decipher. It’s essentially a concept album revolving around society’s obsession with technology.

“It’s your phone, computer, laptop, iPad, television, remote control — all of these things that require you to think about them when they’re not animate.” Butler explains. “We give in to the jealous machines, and do what they want us to do by always having them on ourselves, always checking them, always panicking if we forget them. The requirement of your attention is relentless, but they’re not thinking about you.”