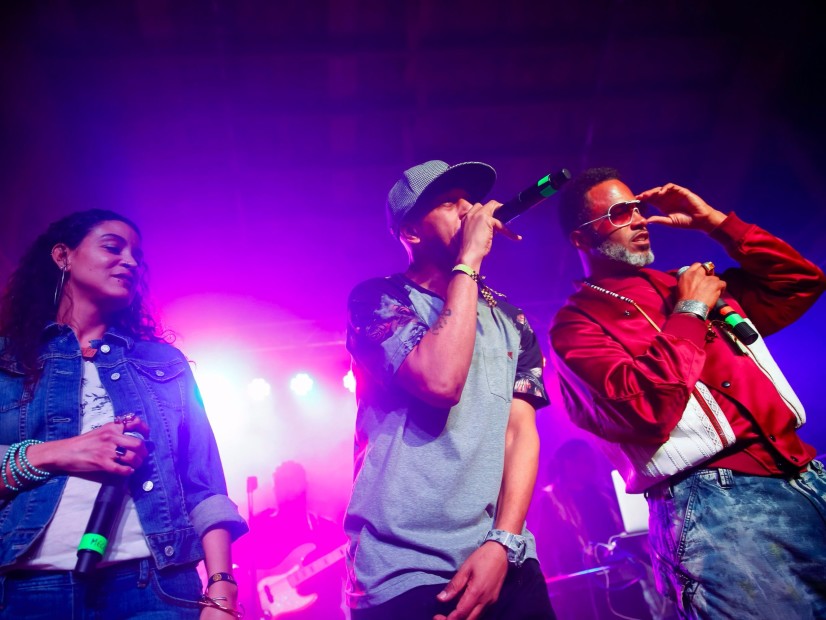 Digable Planets exploded onto the music scene in the early ’90s and brought along its enticing fusion of jazz and boom-bap Hip Hop. Coupled with the intellectualized and deeply spiritual musings of MCs Ishmael “Butterfly” Butler, Mary Ann “Ladybug Mecca” and Craig “Doodlebug” Irving, their music transcended the gangster rap that was dominating the charts at the time.

Consequently, the Brooklyn trio’s 1993 gold-selling debut — Reachin’ (A New Refutation of Time and Space) — captivated an entire generation of Hip Hop fans with its sophisticated sound. The album’s Grammy Award-winning hit, “Rebirth of Slick (Cool Like Dat),” has been a crowd favorite for the past 24 years, and one Butler never tires of.

“You would have to tell me why it would be [tiresome],” Butler explains to HipHopDX from his home in Seattle. “It’s just like a song we made and I don’t get tired of it. Why would I?

“I guess some people might get tired of the song. But every minute of a performance is an opportunity — you’re participating in a spiritual ceremony,” he continues. “It’s what you make of it. A song isn’t anything until you perform it. There’s a lot you can do. It should never get the best of you. It’s your imagination that’s at the core of what happens.”

Unlike Butler’s familial sentiment for his magnum opus, some artists have been vocal about the disdain they have for performing some of their biggest hits. Beastie Boys reportedly dreaded performing “(You Gotta) Fight For Your Right (To Party)” over and over again, while Eminem’s dislike for “The Real Slim Shady” has seemingly grown over time as well.

Like Key Be To Lock: E-40 Sampled The Track For “Yay Area”

After 1994’s Blowout Comb, the group broke up, but the members of Digable Planets were able to mend whatever wounds had been left open over the course of a decade to move forward with a reunion tour. The timing was finally right and the trio routinely tours together with a full band, which includes Butler’s fellow Shabazz Palaces mastermind Tendai “Baba” Maraire.

“We had some opportunities and the people that wanted us to perform, that contacted us … I presented that to the other members in the group and before, we hadn’t really been talking, but the opportunities were cool,” Butler says. “We didn’t really have that big of problems with each other. A certain amount of time had went by, and you realize it wasn’t really that big a deal in the first place and then some cool opportunities brought to light the fact that people still wanted to see you. It’s hard to look that kind of stuff and not accept that, take advantage of it and appreciate it in that way. All of those things coming together combined to make it happen.”

The inclusion of jazz on Digable Planet’s albums and during live shows had a lot to do with Butler’s father, an aficionado of the genre, who Butler credits for his love affair with music.

“I just loved that my father loved it and he was into it,” he says. “I was just trying to be like him, emulate him and learn the things he liked— that kind of thing. My admiration for my dad got me into the music.”

For now, Butler is pushing Shabazz Palaces’ two new albums — Quazarz: Born On A Gangster Star and Quazarz Vs. the Jealous Machines — and touring. There’s a sense that being a part of Hip Hop’s narrative is something he’s grateful for every day.

“Music saved my life,” he admits. “It gave shape to my life. I gave purpose to my life and continues to show me new things about myself, and about the world, so I do feel fortunate.”