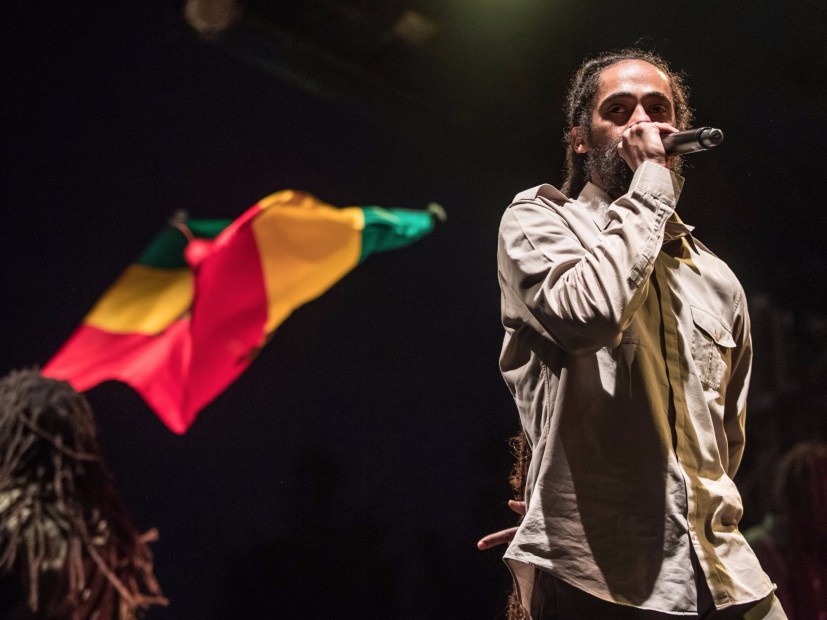 France – When Damian “Jr. Gong” Marley speaks, the youngest son of reggae icon Bob Marley instantly makes it clear that Hip Hop is integral to his musical narrative, but it was Snoop Dogg who really captivated his interest in the genre.

“I remember hearing The Fat Boys and Biz Markie, but in those days, it was my cousin’s music, American music,” Marley tells HipHopDX from a tour stop in France. “When the dancehall era kicked off, we got a sense of Hip Hop in a way. But I liked artists like Mos Def, Tupac, Biggie, and LL Cool J … LL Cool J’s album Mama Said Knock You Out was one of the first Hip Hop albums I had and it was given to me as a gift.

“Of course, as teenagers in those days, we were smoking herb and stuff like that,” Marley says. “That was part of our culture. That was a common ground I think for us, and we started to relate to Hip Hop because we were like, ‘Ok these guys are talking about smoking weed.'”

Professionally, Marley’s relationship with Hip Hop stretches back to at least 2005 when he linked up with Nas on the collaborative track “Road To Zion” on Marley’s 2005 gold-selling album, Welcome To Jamrock. In 2010, the duo reunited for a proper album, Distant Relatives, and continued pushing their Hip Hop-reggae connection with a full-fledged tour in support of the project.

Over the years, he’s also come to understand the direct lineage from Jamaica to the birthplace of Hip Hop — the Bronx in New York City. In Jamaica, “toasting” was the locals’ version of rapping and when Kool Herc emigrated to the Bronx, he brought it along with him.

“While doing my research, I come to find out there’s a direct link to Jamaica through Kool Herc,” he explains. “Like I said, Jamaican dancehall culture was very similar to Hip Hop.”

And his spark for Hip Hop hasn’t dimmed. The 38-year-old Kingston native just popped up on JAY-Z’s heavily lauded album, 4:44, where he joined the Hip Hop mogul on the track “Bam.” He’s also getting ready to release his first solo album in 12 years, Stony Hill, next Friday (July 21), which features his older half-brother Stephen Marley on three of the 18 tracks.

“My brother Steve is definitely one of my huge influences growing up,” he says. “All of my brothers and sisters were influences, but Steve was the one who kind of would rally everyone together ever since we were young. He was the older brother that would pick us up from school or come see you on the holidays. He was the one to bring it in to the group, you know what I mean?”

In true Marley tradition, the musical talent continues to carry through generation after generation, with Marley’s 7-year-old son already showing extreme prowess on the drums. Armed with the knowledge the music business can be full of choppy waters, Marley believes his experience could help his son down a potential musical path.

“Yes [the music business] can be rough,” he says. “But he’s very much into music. He can play stuff on the drum set that I can’t do right now. He actually does play them. For me, I’m going to try to encourage him in whatever he loves to do. It’s definitely his choice — not mine — on whatever he wants to be. I’ll support whatever he wants to do. Of course, there is advice I can give him if he does decide to go into music that I’ve learned in my experience. For example, things I regret not doing. Like, I never learned how to play an instrument properly. Now that he’s young, I like that he’s doing lessons, so if he does decide to do music, he’ll have a good foundation.”