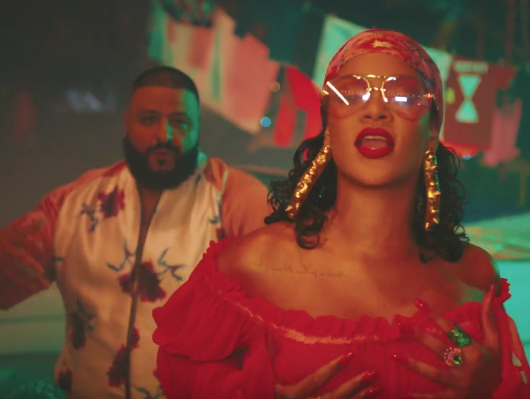 DJ Khaled outdoes himself again with his Rihanna and Bryson Tiller-assisted cut “Wild Thoughts,” which debuts at #1 on the Hip Hop/R&B Single Sales chart for the week ending June 22. Also, Future surpasses a half million in sales for his viral single “Mask Off,” and Calvin Harris’ latest single “Feels” featuring Pharrell Williams, Big Sean and Katy Perry debuts in the Top 10.

DJ Khaled has been on a roll with several successful Top 10 hits off his latest album Grateful. The “Maria, Maria”-sampled song featuring the voices of Rihanna and Bryson Tiller debuted at #1 with 89,449 in sales. The single dethroned “I’m The One,” which spent seven straight weeks at #1, sending it to #2.

Future’s “Mask Off” Hits Half A Million In Sales

Future’s Metro Boomin-produced bop “Mask Off” took on a life of its own after his self-titled album was released, garnering a Platinum plaque from the RIAA. The viral single, which sparked the musical #MaskOffChallenge, has now reached over a half million in sales — totaling 503,359 — with a 7% increase from last week.

Calvin Harris released Funk Wav Bounces Vol. 1 this week and among the many star-studded tracks included on the project is the summer-ready single “Feels” featuring Pharrell Williams, Big Sean and Katy Perry. It sold 23,145 units and hit #8 on the R&B/Hip Hop Single Sales chart.

Harris’ “Slide” featuring Frank Ocean and Migos (#13), as well as “Rollin” featuring Khalid and Future (#63) have all touched the Top 10.