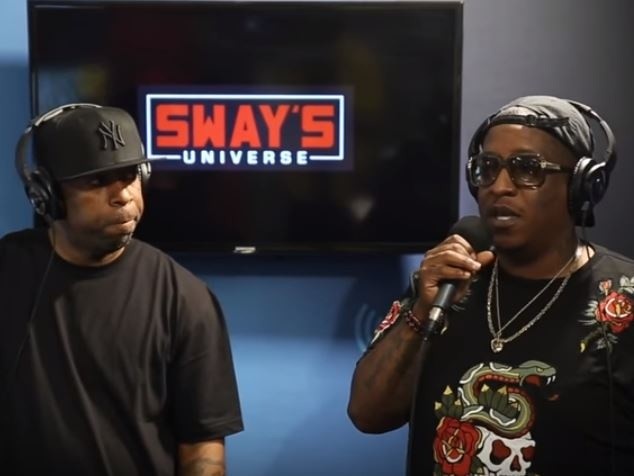 New York, NY – The Outlawz appeared on Sway’s Universe this week, where they offered their thoughts on Funkmaster Flex’s highly controversial claim that Tupac Shakur accidentally shot himself at Quad Studios in 1994.

Although he was not present during the initial shooting, E.D.I Mean revealed that based on the rapper’s wounds, it would be nearly impossible for Tupac to have shot himself in the leg. He also began his commentary on the matter by stating ‘Pac “was not a liar” and vehemently denied Flex’s claim.

“Nah, ‘Pac didn’t shoot himself,” E.D.I. Mean added later in the interview. “First of all, be clear. ‘Pac was very handy … the trajectory of the wound, ‘Pac would have to had turned the gun around to himself to shoot himself like that. So, he definitely did not shoot his own self … He didn’t keep his guns in his pockets.

With the release of the Tupac biopic All Eyez On Me scheduled for next Friday (June 16), The Outlawz were open to sharing a handful of stories from their time spent with the late rapper.

Young Noble recalled a slightly bizarre story of how he met Tupac, who wasn’t pleased at his arrival in a stolen limo.

“Let me tell you the story,” Young Noble said. “They pull up. I hop in the limo. We go to ‘Pac’s crib on Wilshire. Pull up. Go upstairs. As soon as we walk into the apartment, ‘Pac goes crazy on these dudes. They done stole the limo. And he was doing an interview. And they got a stranger who was with them. And that was me … he’s like ‘Yo, no disrespect to you Noble.’ But he starts barking on these dudes.

“I mean, like ‘Y’all niggas stole the limo,” he continued. “Y’all bringing a stranger and all this shit. But Kadafi was like ‘Nah, this my nigga. I wouldn’t bring no strangers around. I vouch for him. I grew up with the nigga. He’s super official.’ ‘Pac passed me the blunt. Like it’s all love.”