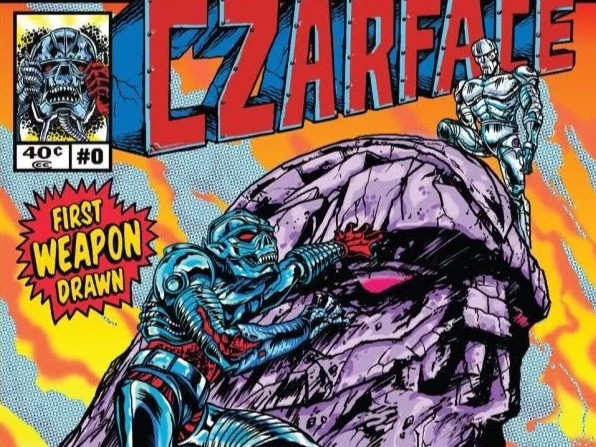 After delivering A Fistful of Peril in November 2016 and collaborating with Marvel Comics, Czarface — 7L, Esoteric and Inspectah Deck — has executed yet another full-length album, First Weapon Drawn, which adheres to its comic book-themed aesthetic. This time, though, it’s meant to serve as the soundtrack to a tangible 24-page comic book that was produced specifically for Record Store Day (April 22).

“As music and dialogue on vinyl, and a full-fledged comic, First Weapon Drawn is a step away from the former Czarface releases in the sense that it serves as a pedestal for the character Czarface,” Esoteric explains to HipHopDX. “As lyricists and producers, we are in the background working on shining the light on him this time around, and we leave the bragging and boasting to him.

“Bringing Hip Hop and comics together is a natural fit,” he continues. “It has been since Hip Hop inception with the aliases and secret identities and countless larger-than-life claims, but what we’re doing here is a gamble in 2017. We’re presenting this vinyl and giant comic when music is at its most disposable and accessible in the digital realm.”

According to the press release, the project was created in “the spirit of the highly sought after Power Records series from the ’70s, you can read along with the comic and hear the story come to life on vinyl. Powered by the trademark sound of The Czar-Keys, a sound that’s been developed since Czarface‘s first LP in 2013, First Weapon Drawn serves as the soundtrack to Czarface‘s mysterious origin.”

The veteran Hip Hop trifecta shared the second single from the project, “Death of a Comrade,” earlier this month, and the remaining 13 tracks are finally available to stream. Sadly, the 2,000 copies of the comic book that were available are sold out.