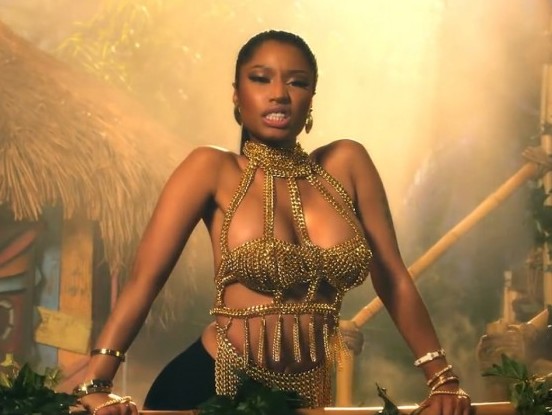 It’s been a full seven days since Nicki Minaj released her Remy Ma diss song response, “No Frauds” featuring Drake and Lil Wayne, as well as the Weezy F. Baby-assisted “Changed It” and “Regret in Your Tears.” The #3PackFromParis tracks have apparently positively assisted Nicki’s sales for her 2010 album Pink Friday and 2014’s The Pinkprint.

For the week ending March 9, The Prinkprint sat at #170 on the Billboard 200 while Pink Friday is absent from the list. Sales after March 9 will be reflected in the upcoming sales cycle, which is likely what the Queens rap star celebrating.

“Just got the official word that in the last week, #ThePinkprint went up 79% in SALES & #PinkFriday (AN ALBUM I RELEASED IN 2010) went up 81% in SALES!,” she captioned on Instagram under a picture of the aforementioned album covers. “Ok #Jesus I see u!”

Look @ God. Man I can't make this sh*t up. Just got the official word that in the last week, #ThePinkprint went up 79% in SALES & #PinkFriday (AN ALBUM I RELEASED IN 2010) went up 81% in SALES! Ok #Jesus I see u! #FunFact – #ThePinkprint holds the title as longest charting female rap album in the history of billboard. My fans are the absolute best. I love u guys so much. My new album will give you the most life you've ever received out of my catalogue. ???????? thank you.

She also points out how The Pinkprint has held down the charts since its release and “holds the title for the longest charting female rap album” in Billboard’s history.  Her album has spent 111 weeks on the chart. That’s over two years of consistently charting.

Remy Ma’s attempt to seduce Nicki Minaj into a rap beef after reacting to a line Nicki rapped on “Make Love” featuring Gucci Mane led to the scathing “SHETHER.” Most felt like it meant the end of Nicki Minaj until Remy tried to take a page out of Drake’s book with “Another One,” when it appeared a response from Nicki wasn’t likely. Remy would soon say she wasn’t proud of engaging in a war with Nicki and says she’s all about women empowerment.

“I do not condone or recommend the tearing down of another female,” Remy Ma said on Buzzfeed’s Another Round Podcast. “That’s not what I do. Anybody that knows me knows that I embrace females. I always want to do some girl-oriented thing. I think we work so much better when we work together and when we help each other.”

“SHETHER” has since been snatched off the internet by Universal for using Nas’ “Ether” sample without clearance, disabling Remy from making a dime off the song and performing it.

According to Hits Daily Double, “No Frauds” and “Regret In My Tears” are impacting the radio already.