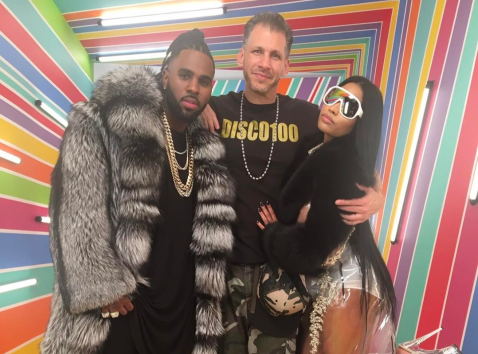 West Hollywood, CA – After earning plaques from about a dozen countries for his 2015 mega hit, “Want to Want Me,” R&B melodymaker Jason Derulo is back on the charts in epic fashion with “Swalla,” his new single with Nicki Minaj and Ty Dolla $ign.

The record’s traction has been moving a breaknecks speeds — becoming the #1 most added song on rhythmic radio and No. 4 most added on Top 40 just days after its release. But it wasn’t the sensual dancehall riddims that got the people talking on social media. It was Minaj’s “I gave these bitches two years, now your time’s up/Bless her heart, she throwing shots but every line sucks” lyric, combined with the similarly themed lines on her Gucci Mane feature, “No Love,” that prompted Remy Ma to unleash the “SHETHER” in the studio.

Being part of such a sensational timeline is relatively new territory for the singer and during a media brunch at Catch LA, a prestigious seafood restaurant of which he is part owner, he reveals his initial reaction to the entire ordeal.

“You know, it’s kinda crazy because I didn’t even expect that,” Derulo, 27, admits to HipHopDX. “[Her dissing Remy] didn’t even cross my mind. I didn’t [put two and two] together. To be honest, I don’t think anybody on my team or my label put that together, either. But I guess it was a combination of [“Swalla”] and the other song [“Make Love” with Gucci Mane]. I don’t really know the whole joint but I do know that her coming back with those three records was unbelievable. That’s some legendary shit.”

The move was indeed legendary seeing that Nicki Minaj recently tied Aretha Franklin’s record of 73 for most Billboard Hot 100 hits among women and at least one of the records included on the #3PackFromParis is expected to put her over the top. As for the now infamous rap beef between Nicki and Remy Ma, Derulo obviously has a longstanding relationship with Nicki so there’s no mystery who he’s riding with. But that didn’t stop him from being entertained like the rest of us.

“It’s good for music,” he instantly replied when asked whether the beef was good for Hip Hop culture. “It makes it exciting to watch. But you know Nicki is my sister and she’s just an unbelievable talent. Some people you don’t really go after. And I think both parties held their own. Remy did her thing but what Nicki did was legendary.”

As an R&B star who has successfully crossed over into several pop markets, whether it be on the charts or by landing primetime gigs like hosting the 2016 iHeartRadio Music Awards, Derulo’s ties to the Hip Hop community tend to get overshadowed as success looms. Yet, aside from the current Nicki collaboration, he’s also worked with the likes of Snoop Dogg, 2 Chainz, The Game, Kid Ink and more — credentials that he says are more organic than calculated.

“I’m a fan of music, man. Whenever you can merge different styles and genres, I think it just makes magic. It’s nothing more than that. It’s just being a fan of music. You can tell the difference in my songs. There’s no one lane that I want to tackle. And it’s because of my musical tastes. You want to work with the people who you are a fan of.”

And with playlists being all the rage these days, it would be completely understandable for a hitmaker such as Derulo to ride the streaming wave but let him tell it, he’s layered in tradition more than one may think.

“I don’t know, man. I still feel a part of that old school mentality where it’s like a full project matters. Though, I do want to do some different things because I got songs that don’t necessarily fit on the album but I’m like, ‘Fuck, I feel like people should hear this.’ People have no idea that I do this! So I want to start doing some doing some shit where I do give the world a little something that’s not necessarily a part of an album that I’m doing. But I always have to have the foundation that’s part of an album as well.”