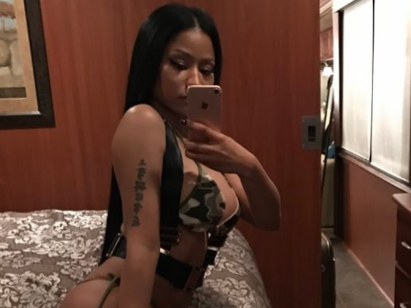 Nicki Minaj appears to be none too impressed with her newfound rival, Remy Ma’s “SHETHER” diss track and has proceeded to commence the slander via social media.

Given the paltry release — commercial and critical — of Remy’s Plata o Plomo collaboration with Fat Joe, the ammo was immediately available for Nicki to use at her disposal. As the track made its rounds on the internet this morning (February 25), Nicki hopped on Instagram to give the people some insight from TheGrapeJuice’s report of the album.

“Powered by the Platinum certified ‘All The Way Up,’ Remy Ma and Fat Joe’s joint effort ‘Plato O Plomo’ debuts disappointedly at #44 on the SPS count. Its combined numbers on that chart came in at 11,158. As for the project’s pure sales debut, that figure sat at a shocking 7,978. Although, this was enough to lift its placing on sales-only chart to #25,” read the screenshot, she captioned with a “Yikes” and facepalm emoji.

The aforementioned “All the Way Up” saw success through a Grammy nomination for Best Rap Song this year, but ultimately lost out to Chance The Rapper’s “No Problem.” The accompanying Plata o Plomo didn’t fare much better from a cultural impact stance, receiving only a 3.2 rating on HipHopDX after more than a year of anticipation and promotion.

Although the two female rap stars have never been decidedly friend or foes, the beef between Remy and Nicki exploded yesterday after speculation allowed the masses to believe Nicki was taking shots at Remy’s “Queen of Rap” claim on the new record, “Make Love.”