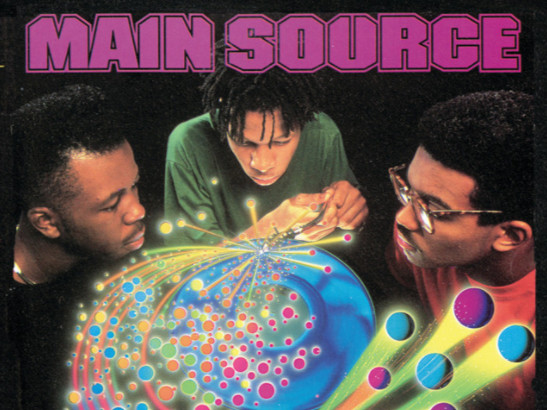 In 1991, Main Source featured a then-unknown Nas on its debut album, Breaking Atoms. No one could have predicted the path the Queensbridge legend would take, but it’s safe to say Large Professor, Sir Scratch and K-Cut are supportive of their longtime friend’s success. That’s not to say the other three members haven’t had wins on their own. Large Pro is one of the most well-respected producers in the Hip Hop industry while brothers Scratch and K-Cut are two of the most revered producers in Canada, and have produced/DJ’ed for artists like Big Pun, Queen Latifah and Fu-Schnickens.

To celebrate the album’s 25th anniversary, the group has not only reunited for a show in New York City, but has also reissued the record with Boulder, Colorado-based company, Vinyl Me, Please. The reissue includes color-in-color vinyl, a bonus 7″, gatefold packaging, a foreword from Pharoahe Monch, a 12-page lyric booklet, and an original art print.

“We got back together to honor the 25th anniversary of our project,” Large Professor tells HipHopDX. “It’s been turnt up and packaged up nice with Vinyl Me, Please, a whole new experience. Twenty-five years later, many of the lyrics on Breaking Atoms are still relevant, and the beats are Hip Hop masterpieces. It’s time to separate the past from the future and move forward.”

Main Source hits the stage on February 1 at New York City’s SOBs music venue with Just Blaze, who is hosting the event. Countless people have showed their support and anticipation for the show, which has truly humbled all three members.

“We are excited to release Breaking Atoms after 25 years,” Large Professor continues. “It is a joy to see that people still appreciate this record and we’re looking forward to doing the reunion show in New York City after all these years. All of our friends who participated on the album are coming out to support us and it feels like we are starting all over again. It’s great to reconnect and perform as a group again and we want to thank our true fans, please come out and enjoy the show. Peace to everyone in the nation, peace all over the world—it’s a blessing.”