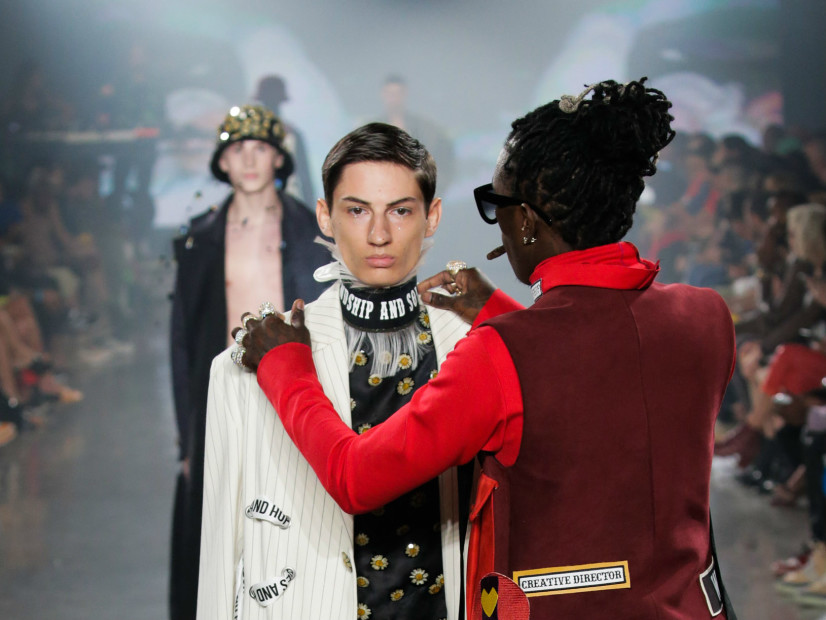 New York, NY – Young Thug saw something he didn’t like, so he changed it. Many people are saying the highlight of VFILES’ New York Fashion Week show yesterday (September 7) was when Thugger stopped a model mid-runway to adjust his collar. He made the move with blunt in hand and while wearing a turtleneck and jacket from the collection’s designer, Rushemy Botter, according to Vogue. He then returned to his seat and let the show go on.

Botter shared a clip of what happened on Instagram, writing “When @thuggerthugger1 wants to style you, you let him” in the caption.

The Calvin Klein womenswear model sat front row at the streetwear and designer apparel boutique’s show, which featured a performance from Playboi Carti. Along with supermodel Naomi Campbell and stylist Mel Ottenberg, who has worked with Rihanna, Young Thug served on VFILES’ star panel to help craft the fashion brand’s Season 7 collection.

Young Thug also partnered with VFILES for the cover art of his No, My Name is Jeffery mixtape where he is wearing a floor-length gown. The outfit was showcased as part of the show, and was received with a standing ovation from the rapper.

Kanye West had his Yeezy Season 4 show the same day as the VFILES Season 7 show.

Check out the video of Young Thug adjusting a VFILES model mid-runway below and see the No, My Name is Jeffery dress as well.

When @youngthug wants to style you, you let him pic.twitter.com/HY6gNtvGNd